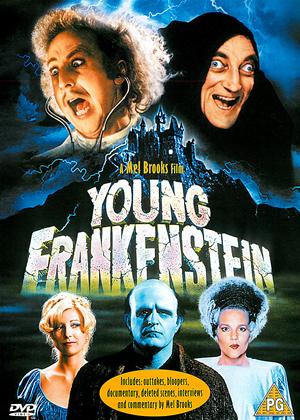 40 years after this Wilder, Feldman, Brooks comedy classic was produced and I am writing the first review? It doesn't seem just. This has Mel Brooks steam of madness gushing through its veins. It is also Gene Wilder in my opinion at his very best (way better than Charlie and the ...). The comedy changes from slapstick to pathos from subtle to crude, it is truly a classic and a must see for all comedy lovers.

Although now very dated, though it was intentionally dated when it was first released, this is a delicious romp in black and white satirising the original ‘Frankenstein’ and ‘Bride of Frankenstein’ horror movies of the 1930’s.

Wilder excels throughout as the manic “brilliant surgeon” (his words) grandson of Baron Von Frankenstein and initially eschews the work of his grandfather although changes his view (though no explanation is given why) and decides to resurrect a dead man and the monster is born; you know the rest.

The story is full of errors, probably due to the editing process; for example it begins with the removal of Frankenstein’s will from his skeletal hands and the arrival of the executor at a lecture ‘Fronk On Steen’ is giving and then isn’t seen again. The reading of the will scene has been cut from the movie (and the outtakes but the production stills are seen in the extras) and therefore the change of motives of Wilder’s character are unclear.

And the script keeps changing and refers to the elder Frankenstein as the grandfather and also great grandfather; which is it?

Marty Feldman, as assistant Igor is entertaining enough although his asides to the camera, whilst being classic Brooks, are tedious and unnecessary.

The two leading ladies excel as the assistant and fiancé with Madeline Kahn excelling as the tease Elizabeth, complete with Bride of Frankenstein hairdo.

Despite the confusing narrative this is a must see movie and the additional “Making Frankensense Of Frankenstein” detailing the making of the movie is a fascinating behind the scenes view of the battles the producers had with the movie moguls to allow them to fulfil their vision.

One of the greatest film comedies, a cult classic and a loving tribute to the Universal 'monster' films of the 1930s. It is literally hilarious and having seen it so many times it never fails to have me in stitches. It's always difficult to ascertain if this was influenced by Monty Python or they were influenced by Mel Brooks, probably a bit of both, but this is zany comedy that works on every level not least because you can see that Gene Wilder is in the verge of corpsing in nearly every scene. He plays Dr Frederick Frankenstein (he prefers Fronkensteen) and resents association with his grandfather, the famous Baron who reanimated dead people. But forced to travel to the family castle in Transylvania to get an inheritance he discovers the old laboratory and notes on the means to bring the dead to life and proceeds to do just that with the help of Igor (Marty Feldman) and a beautiful assistant, Inga (Teri Garr). There are so many memorable scenes and a great cameo from Gene Hackman ("I was going to make espresso") but it's Wilder and Feldman who are a riot here. Marty Feldman is often forgotten for the brilliant screen comedian he was. And of course this is probably director Mel Brooks best film, and one of the few in which he didn't appear himself, he certainly had a keen eye for film comedy of a style that borders between daft to outrageous and is all the funnier for it. This is a must see film and if you've never seen it then it is a real treat.