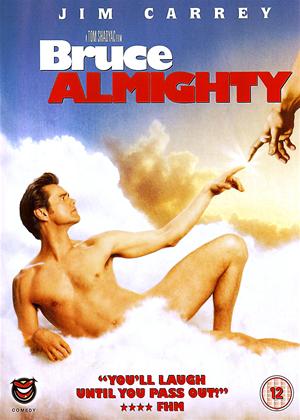 Not that mighty - Bruce Almighty review by CP Customer

Jim Carrey is one of the funniest and most gifted comedy actors around He has the ability to take mediocre comedies, (Ace Ventura), stamp his own brand of over the top humour, and turn them into very funny films. Or, in the case of 'Dumb & Dumber', make them one of the most hilarious comedies off all time. Carrey has also proven himself capable of also tackling drama. He was superb in both 'Man on the Moon' and 'The Truman Show'. Bruce Almighty should have been an ideal vehicle for Carrey, and a premise that should have worked, Bruce (Carrey), after complaining about God and how his life stinks, is enabled with all of God's powers. However, this film has one major problem, the script is pure garbage. Carrey is such a clever actor that his improvisation alone can make unfunny scenes funny. The problem is that there are so few opportunities for Carrey to be unleashed because so much of the comedy relies on silly special effects. Bruce Almighty should have been a comedy that works, and you do get the feeling it could have been very funny film, but it doesn't have the guts to tackle the subject matter that it's making fun of; religion, and at times gets too wrapped up in preaching its message. There are a few minor giggles along the way, but any movie that has to repeatedly incorperate scenes of a dog peeing just to get laughs has problems. But hey, if you find pee jokes funny, go for it.