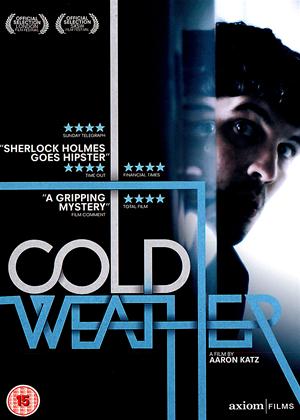 These "actors" never went to RADA, they mumble all their lines - and this disc doesn't have subtitles! So, although I'm not deaf, and am of course used to American accents, I could only understand one word in ten. As they are (probably) trying to solve a mystery, and there are (presumably) clues for us to spot in the dialogue, I gave up after about 20 minutes. I advise you to wait until they add subtitles in a future release.

Doug (Cris Lankenau) is a forensic science student who suddenly drops out of college to pursue being Sherlock Holmes instead. He likes sleuthing but he doesn’t see it fit well in a school setting. He then moves into the apartment of his sister Gail (Trieste Kelly Dunn) whom he hasn’t really been chummy with since they were kids. But whatever, an apartment is an apartment. Doug then finds himself a job at an ice factory even though at first he didn’t even know that ice factories exist.

At work he meets Carlos (Raul Castillo) and they become fast friends. When Doug’s ex-girlfriend Rachel (Robyn Rikoon) tells him she’s about to visit but doesn’t show up, Doug and Carlos don their detective caps on and search for her. Will they find her eventually? Why is the weather always bad in Portland, Oregon where they live? This is ‘Cold Weather’ directed by Aaron Katz, a mumblecore independent picture devoid of a beginning, middle, and end.

As a movie itself ‘Cold Weather’ is nothing new. This is the kind of indie fare that movie aficionados eat up. If you like plot, it’s flimsy but it doesn’t matter. If you want character studies, nothing to see here. If you want people just falling into any situation that comes up, you’re in the right place.

In ‘Cold Weather’ we are taken for a ride with Doug’s non-exciting life. We don’t know if it’s because he lives in Portland or he is just an unexciting person to begin with. But he exists; therefore, something ought to happen. Cris Lankenau as Doug is a good choice; his face is neither here nor there, you can’t really tell if he’s into what he’s doing or just going through the motions. Lankenau does give a comic performance during the sleuthing episode and the circumstances that they are thrown in become a farce. And yet, you can’t help but feel saddened for Doug and company – this is the life you’ve got? More importantly, this is the life you want to settle for?