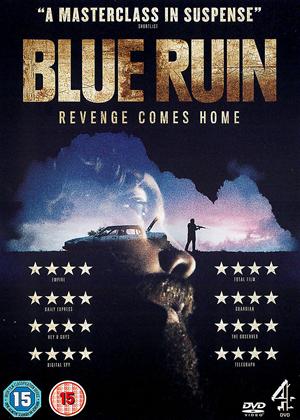 This lo-key ‘thriller’ concentrates on painstaking detail to build up tension, but director Jeremy Saunier is no Hitchcock and his best friend Macon Blair, cast as the lead, is charisma-free. His diffident screen presence brings an air of lethargy to the whole enterprise. He sets out to avenge a murder and we follow the ramifications of his decision, but would-be tense scenes are merely flat and the few flashes of action lack clarity and pass without much ado.

Kudos to Jeremy and his mate for cobbling together the money to make the film and see it achieve success at indie fests such as Sundance, but it’s a sluggish affair. Like most films that are a slow burn, if you wait for fire you’ll be disappointed. As lo-tempo thrillers go, it’s just about watchable but it cries out for some Wow factor. The punchy edits and exciting score of the trailer simply mislead. To see how it should be done, watch top-drawer thriller Cold in July.

Violent, depressing tale of revenge in US mid-West - Blue Ruin review by PV

I think this indie film deserves 4 stars. it's so violent and depressing that I wouldn't really say I enjoyed it, but I appreciated it. It's full of guns, violence, blood and gore and

I thought the actor playing the main character was note-perfect in his portrayal of a traumatised loner haunted by his past.

If you was quick cuts and CGI battles, then you'll have to slow down to watch this movie - but it'll be worth it.

Apparently there's a sequel too - though I don't see how...

Hmm... how to describe this, it's a Brutal Revenge story, but soo Slow in the telling, and the protagonist is pretty Dumb that it is often more Annoying than Thrilling.

A lot of sitting about waiting for people to turn up ,you really did feel you were sat there with him in the dark waiting and waiting ......too much waiting and very little action .

Found it slow and boring - Blue Ruin review by gazmb

I just couldn't connect with this film at all , found it strange story that was boring to follow. Didn't enjoy it at all.

What starts as a simple vengeance story turns into so much more in Blue Ruin, a film that starts by putting its audience in a state of confusion only to slowly tease them out of it playfully through a story filled with spurts of brutal action and emotions long since squashed by its lead characters. If anything Blue Ruin is a masterclass in human psychology and the effects of loss.

Blue Ruin follows a drifter (Macon Blair) as he is informed by the police that someone from his past is being released from prison. This startling discovery sets him on a quest for vengeance against a man that did unspeakable things and received very little punishment. However what starts as one simple task quickly spirals as he is forced to protect his family that doesn’t know him from people he has enraged.

While the film feels gritty and ugly it also has a wonderfully colourful range of colours that add a beauty to a film full of horrors. Blair is a wonderful choice for the drifter as he hides a wealth of unspoken emotion behind his eyes and while the stereotypical down and out beard feels like a little much the film takes advantage of this stellar casting by throwing everything at him only to show he is more than capable of dealing it back at people.

Blue Ruin reminds me in many ways of The Raid, a film that feels like an action film but really hides a very real and very provocative story of family and the value of revenge and justice. All in all the film rides high on a stellar lead performance but it would be nothing without some excellent filmmaking and cinematography. The film shines off of the way it is displayed and everything about it is gorgeous.