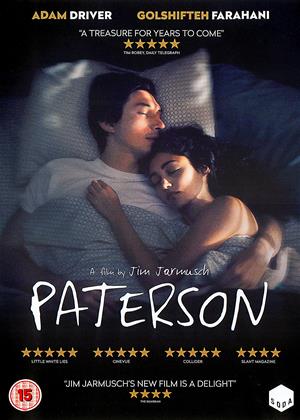 Jim Jarmusch makes gentle, quirky films full of well-observed detail and ironic humour. Paterson is bus driver happy with a routine that gives him space to write poems in his secret notebook. It’s Jarmusch’s skill to make that routine constantly engrossing. But what if Peterson’s routine is broken? And what does that say about what it is to be human?

Jarmusch’s films either soar or fail to take wing. This is one of his best – a film to lose yourself in.

Here you have a character that lives a routine, un-ornamented life, yet breaks away from the average by the way he observes things, the small details of his life.

He writes about these things, and the film overlays his poetry to play this up but for me I found just watching Adam Driver watch people, pick-up objects and generally observe: I couldn't help but start looking at things the way he does. Gave the film a nice, slightly melancholic, moody feel which I really enjoyed.

He lives in an apparently care-free world with his girlfriend, whom is almost of the flip of him: she constantly searches and chases her dreams, spends her days learning the guitar, re-styling their house (rather 'interestingly'), engaging in 'potluck' cooking; while he watches on, slightly amused but never bothered by her foibles, if anything entirely contented and in love.

Only when he temporarily cannot write does the character seem to disappear, even in the face of a breathtaking vista, it's the written word that lights him up.

I mliked this film although I had doubts for the first few minutes. Once you get the slow, meditative pace, the way Paterson absorbs what's around him and tried to express it in poems you are hooked. The quality of the poems isn't the point but one spin off from watching this slow chronicle of a mundane life could be the desire to write poems oneself. Seeing how this character turns everday observations into his version of verse is inspiring, not that I'm mad about the results; it's the intention that scores. I liked the repetition of the beginning of each day, the patterns of their lives. The characters in the bar each evening; the fact that the post box is askew each evening and then the revelation of why this is. So much to revel in if you like daily texture. Not for those wanting action, gun battles (although there is one moment) or car chases.

Paterson in Paterson by Paterson with Paterson - Paterson review by RhysH

"I've just seen a great film. You ought to see it."

"Is that the name of the main guy?"

"Yes and the name of the town he lives in."

"Oh and what type of guy is Paterson?"

"The film's about a bus driver?"

"He gets up at the same time every morning, has the same breakfast, walks the same route to the bus depot and drives his bus about town."

"Oh and in his spare time he writes poetry."

"And does anything happen to him?"

"Not really. He meets people. He observes people. He disarms a guy who's waving a toy gun."

"And you recommend this film?"

"Oh and something sad happens to his poetry."

This film is a joy. Extremely eccentric and offbeat, it is a wonderful character study of a young couple living in small town America. Highly recommended.

I loved this film, its not for people who like the Hollywood Blockbuster type films, but if you like bit different and quirky you should like this. the central character Paterson is such a gentle, kind caring man and his wife is so funny. the dog has great role too! One reviewer said about the poetry not being good, its not meant to be, its just part of the story and shows Patersons character even more. I must admit when it first starts I was a bit worried I had made a bad choice but after ten minutes I got into it and understood the style. I even watched the extras on the dvd and I never do that. One of those films that stays with you

Loved this film...unusual form but arresting and motivating the thoughts of the viewer into what could happen next...the characters all believable in our frustrating world, with Paterson and his Poems leading his focus and his ability to live the daily routine of his life.

I wished there was a sequel...

Very slow thought provoking stuff from Jim Jarmusch so if you are surprised by that but agree with other reviews here that Ghost Dog is still this directors best movie and most accessible. It was perfect viewing for my weekend hangover.

I'm not sure why everyone on Amazon is raving about this. It's slow paced and barely anything happened. The main character's wife is annoying and his poetry is poor. I'm not a stupid guy and I like lots of different kinds of films but this didn't really entertain, excite, educate or amuse me. On the plus side Driver performed well and the general atmosphere of the film was great.

Bit culty arty crafty for me. Is proper filmatographic deal. Critics will love all the clever photo shots and oddball, and ordinary folk switch off in 5 minutes. Have to give it 3, or will look like Philistine........Only Jim Jarmusch i could really watch was Ghost Dog.......and i loved Bagdad Cafe, which started a lot of this genre off, very big in France apparently! Have watched Paris Texas twice! Mainly due to hypnotic Ry Cooder music :)

A film by the people for the people, Paterson is a contemplative take on the poetry of ordinary life - if that makes any sense for anyone still eager to learn how I’m ultimately scoring Jim Jarmusch’s piece. See, Paterson draws a fine line between artistic, indie films and slow-paced, boring wannabe dramas that ultimately lead up to nowhere in particular. Therefore, I can proudly exclaim that Jarmusch has outdone himself this time, and not for the better I might add.

First off, Paterson slaps poetic repetition in your face: a public sight for everyone to see and cherish. So, Adam Driver who plays Paterson, is a bus driver in Paterson. He also aspires to become a poet; well, not really become, but rather to extract poetry from seemingly ordinary, everyday things such as a plethora of different twins in and around Paterson (the town), lunchboxes, subversive chess plays in tough guy locales and so forth. Paterson (the guy), needless to say, is also fond of writing his own poetry, which is then audibly presented to the audience several times over. Was this really necessary? The answer is no: it’s recited one times too many.

Paterson features extraordinary ‘segments’ that somehow spill onto the real world the characters inhabit. Like his girlfriend Laura’s (Golshifteh Farahani) paintings which slowly start to engulf Paterson’s (the guy) setting. Even the dog Marvin falls into this category, by carefully obfuscating the omnipresence that is Paterson (the town).

Everything is out of place, yet everything feels neat and orderly in the community of Paterson.

Venturing deeper and one can almost sense the shortcomings of Paterson: lack of real conflict with real consequences. This goes without saying, but why anyone should care what happens in a film if no action is anteceded by a logical, or even illogical reaction? Paterson and Laura rarely ever argue; in fact – they never do. The weather is always nice; the people are always friendly, even when a gun is being drawn out in a bar – we proceed to learn that the gun is a fake.

Furthermore, Laura and Adam seem isolated from real world consequences: no TV, no Internet, no news, no anything. Even when Paterson’s bus breaks down – nothing really seems to be bothering our main protagonist. And that is all fine and dandy, but is sadly not captivating enough to be stretched about nearly one and a half hour more than what is needed.

Paterson by Jim Jarmusch overstays its welcome by a large stretch of a margin.

Finally, is Paterson worth seeing? Well, it depends on who you’re asking. The arty-partsy film critic would embrace Paterson as if it was the second coming itself; the street thug would dismiss Paterson as the Emperor’s new clothes; the middle-aged film buff would neither love, nor hate it.

How about what’s left? Well Paterson probably doesn’t play in a theater near the average citizen – so we can never know for sure.