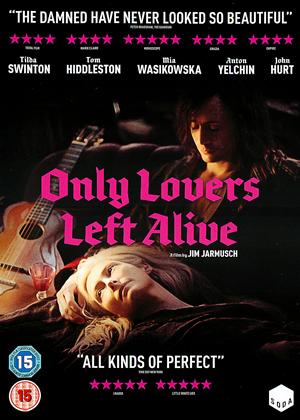 Reviews (6) of Only Lovers Left Alive

Beautiful visually, mentally keeps you on your toes, you need to see the world from a larger perspective to 'get' this film. No action or much tension but musically and emotionally it has depth.

I liked the idea of this, a sort of brooding modern-day vampire love story set among the ruins Detroit, but after a while its inertia began to grate on me, as the lead character, (played by Tom Hiddleston as a man with a bit of a headache), mopes and sulks around his house like an adolescent goth. His partner, played by Tilda Swinton, comes off better, but here the differences are hammered home with the subtlety of a wooden stake: she dresses in pale colours, white or beige, has blond hair and pale complexion and smiles a lot, while he dresses in dark colours with black hair and scowls a lot. After this has been established - in about three minutes - not a lot happens. The Chekhovian concept of introducing a gun in the first act if you're going to use it in the third is half followed through, and the couple talk about all the famous people they've known in their long lives - apparently they used to hobnob with Keats, Shelley, Byron...obviously not the kind of vampires to keep a low profile or waste their time waiting tables or even being doctors. After much forboding and ominous "I had a dream about Eva last night" her sister Eva turns up and is played by Mia Wasikowska as a very annoying bratty teenager, which sets off a barely-interesting chain of events (although this does deliver the funniest line of the film) and the film sputters out from there. Beautifully shot, it has to be said, but otherwise rather empty and, due to its almost perverse avoidance of drama, quite dull.

Centuries old vampires exist in the modern world. And that’s it, that’s the plot. The fascinating Tilda Swinton (Eve) looks exotic in a number of baroque outfits, Tim Hiddleston (Adam) plays a typically soft spoken goth, and John Hurt is the supplier who brings them superior blood – ‘the good stuff’ – for a special treat. The acting is terrific and very natural, convincingly portraying what life would be like if they really did live forever.

The look of the film is rich and lavish. Writer and director Jim Jarmusch is clearly in love with the concept. Very much like the earlier, rather more succint, ‘Kiss of the Damned (2013)’, the sedate pacing and uneventful lifestyle is interrupted by the arrival of the heroine’s unruly and precocious younger sister, Ava (Mia Wasikowska).

After watching Adam and Eve doing things really slowly, it is to be hoped that Ava’s inclusion would be something of a shot in the arm. Not to dispel their night-time sanctuary, but just to provide … something. After all, about the most eventful occurrence up until this point is when the electricity cuts during another airing of their surprisingly non-goth music. For her duration, Ava’s presence does exactly as it should – shakes the two old vampires up and disrupts the complacency that has marred the film up to this point.

My favourite character is probably Ian, the wheeler-dealer type. He’s a shadowy, shady ‘zombie’ (Adam’s contemptuous name for humans) and is enthralled by the rock and roll lifestyle these real ‘life’ goths adhere to. It is his demise at the hands of Ava that propels the couple, first to rid themselves of her (and therefore the interest she brings) and then to travel to Tangiers, where Eve was residing during the film’s opening.

There’s no doubt for me that Ava’s appearance makes things more interesting, but also has the effect of making me appreciate more the earlier, tranquil non-eventfulness of the story, and Adam and Eve’s understandable need for a return to that anonymity. Their story has quietly become compelling.

I rarely quote other reviews, preferring my opinions to emerge uninfluenced, but my favourite critique of ‘Only Lovers Left Alive’ is from Jessica Kiang of ‘IndieWire’, who gave the film a B+ grade, saying, "the real pleasure of the film is in its languid droll cool and its romantic portrayal of the central couple, who are now our number one role models in the inevitable event of us turning vampiric."

This is NOT a vampire film, not really. The vampires are but an excuse, a vehicle, to criticize Mankind and its waste - persecution, even- of the occasional talented individual among the mediocrity (the aptly-named "Zombies" by the hero) and its disregard for what really matters, such as science, nature, art and historical perspective.

Relentlessly, Mankind walks into self-pollution, undervaluing the great potential of the human soul and intellect. It takes many centuries of experience and learning to appreciate that fact… and, unfortunately, only vampires have that scope.

This film is also about building a really long-lasting love relationship, and, for the coup de grace, the film also humbly recognizes that, ultimately, the biological imperative to survive overrides any philosophic-artistic niceties; even sophisticated vampires need feeding more than anything else.

A very original, well-acted film that deserves all the praise it got, even if occasionally for all the wrong reasons, in my opinion.

I am soo Vampired Out these days ,Vampires,Vampires everywhere TV,Adverts,Movies,Comics,Books,Yaaawwwwnnnn ,I dont even know why i bothered to get it ...but having done so ,I enjoyed it to some extent, probably one of the better Vampire Movies of the last 20 years since Twilight ruined vampirism for everyone . Think a much much Less Glamorous and more Seedy 'Hunger' ,with far Uglier Vampires than Bowie and Deneuve .Rattier Homes and only Drinking Blood from Blood Banks .

In this neat and seductive little film – Jim Jarmusch’s best for ages – a few centuries-old cultivated vampires eke out their existence in the dark corners of the world while contemplating the mess ‘zombies’ (i.e. humans) are making of the planet. Typical of Jarmusch’s off-kilter take on life, it’s not like any other vampire film you’ve ever seen and will be too languid for anyone brain-fried by the Marvel universe. Don’t be put off. The tone is elegant and languorous. The plot is quirky and tense. The dialogue is funny and thoughtful. The menu includes iced blood lollipops. Like all the best films, it sucks you in until you don’t want it to end.

Tom Hiddleston is excellent as a reclusive floppy-haired electronic musician who once wrote an adagio attributed to Vivaldi. He still lives the romantic life he learned from Byron and Shelley. Both he and his music are really cool, man. (Check out the soundtrack by Jarmusch’s band SQURL on YouTube.) Tilda Swinton is Tom’s enigmatic wife, who is ‘quantum coupled’ with him even at a distance. John Hurt has a cameo as Christopher Marlowe, who apparently really did write Shakespeare’s plays. Mia Wasikowska is the headstrong younger sister who’s about to put them all in danger (Don’t go clubbing with her!).

Can they survive in the modern world? Even zombies will be rooting for them.

While a film doesn’t need to be fast paced to be considered good it does need a pace, something to push it out of the starting blocks and give it a head start. That doesn’t so much happen when it comes to Only Lovers Left Alive, in fact the film just treats its subject material like the mundane, an element of the film that the director clearly sees as witty irony while the rest of us mortals are just left with the vampire film equivalent of dial-up when really, we wanted broadband.

The film follows Adam (Tom Hiddleston), a immortal rocker who drinks human blood supplied by a doctor while he works on his latest music. His wife Eve (Tilda Swinton) returns to be with Adam but before long her sister Ava (Mia Wasikowska), an immortal and rebellious troublemaker begins ruining their simple and mundane existence leading to many unexpected events, some of which may prove fatal.

Despite the many dangers presented in the film there is never really a sense of dread. The fact that anything could happen doesn’t even feel like a possibility as something would have to take place in the first place. Adam’s life is dull, he may have wit to boot (Hiddleston doing some fine comedic work) but his life feels less cinematic, more anti-climactic. Ava’s arrival does change the dynamic of the film but only as a way of getting Adam out of his funk.

While Eve does make a pleasant enough addition to the film and Swinton shares great chemistry with the all around affable Hiddleston its not enough to make the film even close to enjoyable with too much time wasted on ambiance and mood and not enough on story and actual progression. The film feels like it is a step towards getting Adam and Eve back into the vampire game, a kind of Stella Gets Her Groove back but with the blood sucking persuasion and the unfortunate thing is people without purpose don’t interest and at his core Adam is completely purposeless and so is the film.