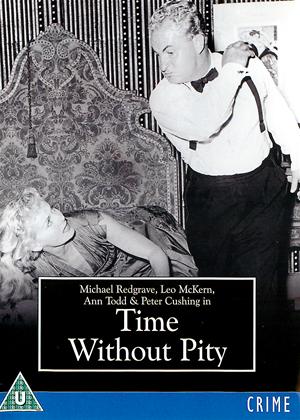 Reviews (1) of Time Without Pity

At his best, ('The Servant', 'Accident'), Joseph Losey could hold his own with most of the giants of world cinema. 'Time Without Pity' came nearly ten years after his first feature, but can be seen as his first film of real quality. Of the ten which came before only 'The Sleeping Tiger', with Dirk Bogarde, stands out.

Images fragmented and multiplied in mirrors. People shouting, hysterical, confused. We are looking through the eyes of an alcoholic, with a mind half-dissolved by drink, who seems to have lost the ability to be coherent or logical, or to see things in that way. But when David Graham, fresh out of a sanatorium, has just twenty-four hours to save his son's life, coherence and logic are exactly what he needs.

Losey takes it at a delirious tempo: so many clocks on walls, ticking away, faces coming and going, so many of them offering drinks, one of them in a room full of alarm clocks, every time one of them goes off it's a reminder that time is almost up. People keep mentioning the time of appointments, the time they were doing something or other, that there isn't enough time, what will happen in time, that time is running out.

A blistering cast is the icing on an already rich cake. Michael Redgrave quite often played insular characters ('The Browning Version', 'Thunder Rock'), teetering on the edge of sanity ('Uncle Vanya'), or who had actually fallen over the edge ('Dead Of Night'). In this mood, few actors could match him. There is a raft of great names in support: Leo McKern, Ann Todd, Peter Cushing, Paul Daneman, Alec McCowen, Renee Houston, Lois Maxwell, Joan Plowright, Peter Copley, Ernest Clark....Gracious Me!

There is perhaps a touch of the overly dramatic every now and again, but this is still a very fine film, and one of the highlights of the Losey canon.