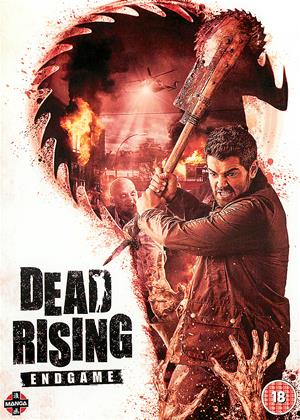 On occasions, you cannot beat sitting back and watching a society of the living dead getting massacred in graphic and bloody ways. Based on a video game, this sequel to 2015’s ‘Dead Rising: Watchtower’, begins with a gaggle of earnestly perfect-looking females assuring hero, square-jawed Chase Carter (played by square-jawed Jesse Metcalfe) that whatever happened in the previous film, he’s still a great guy. They are the core of a group of journalists who have stumbled upon a government secret, with a briefly seen Billy Zane popping up as the evil scientist Rand.

After an impressive pre-credits sequence, the pace slackens considerably. The direction, by Pat Williams, is first rate for a modestly budgeted adventure such as this, and ensures that, even during the extended periods when nothing of interest is happening, at least it looks good. But where are the zombies, you might be asking?

It takes a good while for them to appear, but when they do, the cinematography does them proud, although for such a project as this, the various impressive action sequences are light on gore – although what there is looks great.

I think the jokeless, daytime-soap earnestness that permeates every scene is my main issue with this. The actors are fine, but their characters have no real spark about them, nothing for the audience to latch onto or care about. Apart from this issue, I enjoyed ‘Endgame’. It could perhaps be described as an espionage zombie story, with as much attention paid to political villainy as there is to skull-like living cadavers having their brains splashed across the concrete.