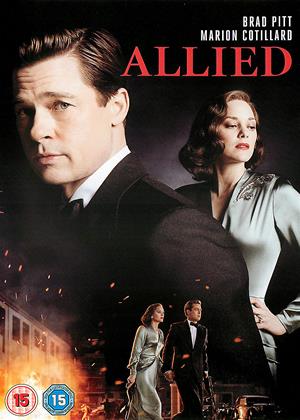 Although not a film of any great note, an intelligent Steven Knight script does enough to keep the audience guessing and Robert Zemeckis directs with his customary fluency. As the star-crossed lovers, Brad Pitt is his usual charismatic screen presence and Marion Cotillard is less so. The high point is a brief but beautifully shot sex scene in a car in a sandstorm.

There’s some brief action in the first half but the main thrust of the story is a second half of Hitchcockian suspense. Warning: the trailer is a spoiler that shows everything except the last few minutes. Avoid that and you’ll find here a finely-tuned drama that merits an indulgent wallow for a couple of hours.

Pitt and Cotillard are superb in this film, their acting and on screen chemistry is remarkable.

They play Max and Marianne, two war time agents brought together to terminate a high ranking German. They are complete professionals, paying meticulous detail to every part of their subterfuge, which I found really interesting. Of course, the pair begin to fall in love and after their above mission become man and wife.

Then comes the bomb shell of H bomb proportions. Max is summoned to intelligence offices and told that his wife could be a German spy, if this doesn't rip his heart out enough, they want him to set her up and pull the plug if she is.

Convinced that the woman he loves with all his heart is not a German spy, Max begins his own extracurricular investigations. There follows real edge of your seat suspense and greatly acted paranoia by man and wife.

In addition to the acting and tense story, I thought the action scenes were excellent and realistic.

Yea, this film did it for me.

It was nice to see a film that was happy to look lovely and not worry about being gritty from start to finish. The storyline was also quite interesting but unfortunately it had a slightly vacant feel about it, as if everyone involved knew it was just a bit of fluff. Marion Cottilard is the best thing in it, as usual in all her films, and it is really her performance that carried the movie. My problem was with Brad Pitt, he looked slightly like a wax-work dummy and acted as if his mind was on something else.

This film is overhyped and the trailer is a massive spoiler. I wanted to like it, but it is rubbish and it is such a shame two such good actors got lost in this unbelievable storyline, unbelievable sets, and stodgy dialogue with such a predictable ending. I stayed to the end and accept therefore that it was mildly entertaining but I was deeply disappointed.

Pitt and Cotillard are fantastic in this film, their acting and on screen chemistry is fabulous. It is lovely to watch and very suspense filled - but you may have to put reality on hold as the full plot develops. Apart from that it is highly watchable

I enjoyed this more than I thought I would. The big budget helps - beautiful cinematography, excellent sound design and above all - in terms of production values - Ms Cotillard's costumes, a real throwback to the '40s and the Golden Age of Hollywood.

I don't really get the complaints made against the piece for its lack of realism or lack of emotion; I felt the latter was all there, but ironically more and more repressed as the couple's marriage allowed what should have been the opposite to occur. But as Pitt's CO, the excellent Jared Harris, says, marriages from the battlefield never work. It's hard from this juncture to imagine the terrifying emotions involved in the kind of undercover work of the film's first-half, it must have been be destructive and paranoid. Who amongst us can say how we would react to such nerve-shredding pressure?

In a review of the Marx Brothers' glossy production A Day at the Races, Graham Greene looked back in preference at their earlier work: “these revellers of the higher idiocy should not mingle with real people nor play before lavish scenery and an arty camera. Like the Elizabethans, they need only a chair, a painted tree”.

Paradoxically enough, Greene's remark came to mind while watching Allied (2016) which is set in the Europe of World War Two with Brad Pitt and Marion Cotillard to the fore – against many an impressive background.

In the opening moments a parachute opens, and Pitt lands upon the desert somewhere in the vicinity of Casablanca, to which he is spirited in an automobile rather cleaner than one would expect amidst those swirling sands. Come the arrival in that fabled city, he – a Canadian agent – is embroiled in drama and romance akin to that for which the place supplied the title of a film eighty years ago.

No more than Bogart's joint was filmed in situ, Pitt did not descend from the clouds in this one. To say that this, and much of Allied, is a digital re-creation can miss the point (whether the scenes be there or Hampstead). One only needs to think of the many scenes in films across the decades in which people drive an automobile while it is clear that the twists and turns of the road are a back-projection. Good acting, and lighting, can carry aloft such a simulacrum: suspension of disbelief.

Directed by Robert Zemeckis (who began his career with Spielberg) from a script by Steven Knight, Allied draws upon many a wartime trope: eternal suspicions of a double-cross amidst a sexual free-for-all (at a party, as an air-raid siren goes off, a door opens beneath the stairs, whence naked breasts tumble forth, swiftly followed by a soldier on leave).

If the story sometimes appears about to clunk, Zemeckis's sense of pace carries it along, scant time to question its international logistics. The two-hour traffic of the screen is swift – and equally absorbing are the DVD's extras which a cinema audience would not have seen. As is often the case with such mini-documentaries, we are told that all concerned are geniuses to whom Leonardo would pay homage if he had anticipated cinema.

What becomes more interesting, in these brisk depictions of collaboration, is the way in which digital techniques can become the contemporary equivalent of the Elizabethan methods to which Greene alluded. A replica Lysander aeroplane was built when it became apparent that the necessity for rain would wreck the one surviving example – and the rest of that airfield's squadron was replicated upon a keyboard. Time and again, Brad Pitt and the others acted their scenes before a sheer-blue background: this would become the place in which Casablanca or Hampstead would be projected before our eyes.

Strange to think that Hollywood actors now find themselves working upon the equivalent of a bare-bones village-hall stage.

The ultimate judge is the retina - upon which Allied leaves a good impression. Even so the brain might question whether those agonies should become entertainment here and now. Perhaps that was the reaction to Casablanca.

Allied is a well-choreographed thriller that happens to take place in a WWII setting (Brad’s favorite in recent years) and tells the story of a man and a woman playing a game of cat and mouse with more at stake than just their personal lives. Yet, Allied feels like a deeply personal film, filled with characters that do ordinary things and live ordinary lives amidst a world that’s just about to change as we know it. And thus it the tragedy of these people embroiled in a conflict of grandiose scale, a sort of powerlessness that makes the whole ordeal feel uneasy and tense until the credits roll. Yes, Allied is a good film.

Allied is directed by Robert Zemeckis, penned by Steven Knight, and stars Brad Pitt and Marion Cotillard in roles that many joke are the continuation of Mr. And Mss. Smith in the 1940s. Lame jokes aside though, Allied features quite a decent cast that works great for this particular installment, with a rare chemistry between the actors the film industry seemed to have forgotten nowadays. Not true for Allied though: Brad as Max Vatan and Marion playing Marianne Beauséjour are the perfect Hollywood fit which allows for an interesting story to be told while they eagerly linger and mingle on the big screen.

The film features top-notch special effects and CGI, but it’s the script that really shines. Allied puts forth some clearly defined literary (translated visually) themes such as putting ideals over oneself and your loved ones, or defying the truth in light of an emotional connection towards a person, or even putting your life on the line for the things that really MATTER to you at that time. But above all: trusting yourself to make the right decision and cause harm to several in order to save thousands, even millions. Tough shoes to fill indeed.

Additionally, Allied teeters on the verge of a modernized Greek tragedy, depicting how hard it is for two spies to fall in love with each other (and for that love to last). The grand irony here is the fact that the same things that drew these two together can possibly become their final undoing as well. Their (Brad and Marion’s character’s) ability to lie to each other is only amplified by their professional training to never believe words that are spoken by another human being period.

Bottom line, Allied is a sum of its parts, and its parts feature a tad bit of everything, including top-class espionage, war, assassinations, conspiracies, double-crossings, narrative twists, and some breadcrumbs of melodrama thrown in there for good measure too. Robert Zemeckis has managed to cram all of these things together without the film feeling too, well, cramped. Four out of five for this one.