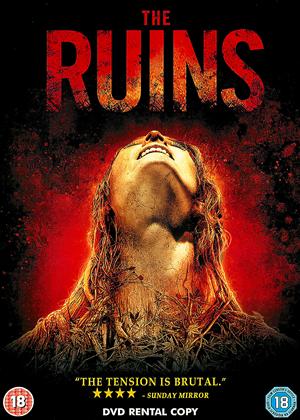 Reviews (4) of The Ruins

A shocking, scary surprise ! - The Ruins review by CP Customer

What a wonderful little horror film this is. And quite a refreshing change on the 'teens in trouble' genre. This is far from the usual 'slasher' movie.

What starts out as a simple sight seeing trip to a Myan temple, turns into the tour from hell almost immediately, the action starts quick and is relentless throughout.

I wont spoil it for you by giving details of what attacks the teens, but needless to say, its as original as hell and twice as nasty!!!

Watch this rollercoaster of a movie and enjoy loads of chills, thrills and maybe even some bellyache (lots of gore!!)

Ruined my day - The Ruins review by CP Customer

A complete waste of film! Utterly ridiculous. If you are interested in talking plants that can adopt different sounds then this movie is for you. It's nearly as bad as the invasion of the killer tomatoes.

‘Once there was a girl who got so drunk one night she stuck her tongue down some guy’s throat,’ relays one character to another member of his group of friends, eager to stir up some bad memories for Amy (an initially fragile performance from Jena Malone). Therein lies the first dilemma for this bunch of pretty boyfriends and girlfriends who, whilst holidaying in Mexico, allow themselves to be talked into investigating some ruins by fellow tourist, German Mathius (Joe Anderson). Although the friends are fairly appealing, their typical perfect-teen dramas in paradise are far from enthralling.

But stick with it. As is often the way, when the poor blighters begin to suffer – and when they do, your heart genuinely goes out to them – then things become a lot more interesting. Of course, you wouldn’t expect their obligatory cell phones to work deep within Mayan territory. And, unless you have read the novel on which this is based, you almost certainly wouldn’t expect the antagonists to be malignant vines that grow throughout the temple’s architecture. These spitefully lethal tendrils are a terrific surprise and a welcome break from sleek-jawed vampires and ubiquitous zombies who have for years made their presence felt in cinema. It is the way they are realised and what they do that makes them horrific – crawling over sleeping bodies during the night, entering the various wounds the youngsters have picked up and flourishing under their skin. They emulate sounds, their flower-heads singing like birds, simulating the chirping of a distant phone signal or, even more cruelly, copying the shrill cries of human distress: mimicking, even mocking the group they are infiltrating.

‘Four Americans on a vacation don’t just disappear,’ says Jeff (Jonathan Tucker) optimistically and with conviction. Whether his is right or not is a spoiler I’m not going to reveal. Infection, amputation, possession – it’s all here. Recommended.

Fetch The Weedkiller - The Ruins review by Spoons

The Ruins is a nasty little shocker which has some truly disturbing scenes. The only slight disappointment was the ending which was non conclusive and felt rushed, hence the three stars instead of four. Still worth checking out though.