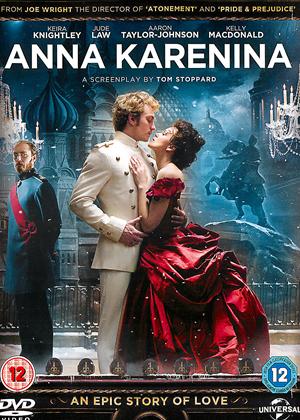 I had high hopes for this film - which is perhaps why I am so disappointed.

Yes, it's adapted by a great writer - Tom Stoppard. But, as those finanical adverts put it, 'past performance is not necessarily an indicator of future success'. He messes with the novel something rotten.

The director too seems to think he's making a film for his luvvies down the local state-subsidised theatre, or perhaps for the Edinburgh fringe. This movie is strictly for theatre fans and luvvies - though I watched it with a theatre lover and she hated it! It's neither Arthur nor Martha - but half a film and half a stage play. In other words, a right royal mess!

This film is largely set in a theatre - for some incomprehensibe reason. Budget maybe? But hey - they budget on this movie was rather large: they could afford top actors and one of Britain's most famous writers!

How much better this would have been if it had been made as a traditional historical story - like Dr Zhivago (a superb movie) or a movie like the Danish 'A Royal Affair': now THAT Is good storytelling.

Not sure about Aaron Johnson or Macfadyon in their roles either - I kept thinking of John Lennon and Spooks! Keira Wotsit does her usual coy ting.

1.5 stars rounded down because I'm so disappointed!

This will pass 2 hours relatively harmlessly (though a little confusingly, seeing as there are so many characters and many look alike).

Hmmm... It's not very often that I don't watch a film all the way to the end, even really bad ones. Yet I switched this off after about 15 minutes - I'd had enough.

Back in the days when I had a very long commute I read a selection of Russian classics: Tolstoy's 'War and Peace' and 'Anna Karenina' and also Sholokov's 'And Quiet Flows the Don' and Pasternak's 'Doctor Zhivago' come to mind, if only for their length :)

So I was interested to see this film - but what's this? The lightweight Kiera Knightly playing yet another lightweight role in pretty-pretty clothes, and the 'action' mostly set on a theatre stage?

I found it unwatchable. Perhaps someone will come along and tell me that I missed a classic - but I don't care and consider that I've had a narrow escape from over 2 hours of tedious boredom.

this film had a good story and was in the main well acted. The problem with it though was the confusing part where it was half filmed in the theatre. Maybe this was art house and the directors vision, but it was half film half theatre and for us didn't really work for that reason.

I liked this film better than the previous reviews on this webpage led me to expect. The cinematography is very good - occasionally dreamy and surreal. As noted by others, the screenplay is innovative with scene changes often accomplished by a seamless transition from a normal film set to a backstage-theatre set and then on to a different film set - whilst confusing at first, it's quite a slick way of changing the scene and/or the mood.

I thought the story was quite well told, although I agree that some of the characters could be confused initially, and the sex scenes were delicately handled in keeping with its '12+' rating.

Somewhere there's a good film to be made of Anna Karenina but this isn't it. The settings are so mannered, based around a theatre, as to be off-putting. Nor did I think that the lead characters carried enough weight. Disappointing.

Most disappointing. Not often that we fail to watch a film all the way through. More like Alice in Wonderland than Tolstoy. May try another version as this should have been a wonderful film.

In a complete misjudgement the film makers decided that the best way to film Tolstoy’s sweeping drama was to set it in a small theatre with interchangeable backdrops, using only a few exteriors. The result, despite the acting talent on show, is like an am-dram misfire cobbled together in a church hall. The hall is even incorporated into the play, as when Anna walks across the stage past a man sweeping the floor. Such a conceit makes it impossible to engage with anything that’s happening. As if that isn’t enough, the awful, incessant, cartoonish, orchestral soundtrack mimics and choreographs the action until you want to scream.