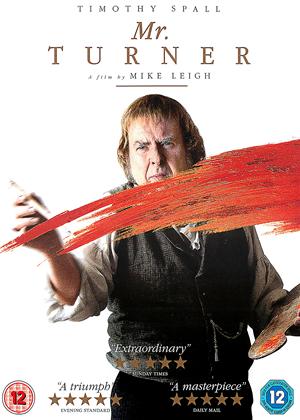 This movie was terrible.

All the characters were played badly and it was like a comedy,

I just didn't get it.

If Turner was really like this well its really sad to see him portrayed this way.

4 out of 12 members found this review helpful.

Watching Mike Leigh's movies is a bit like watching Bergman. Subtle and without any unnecessary rubbish. I loved every single second of this film and after one week it is still in my head.

I could not see any point to this film. It was dull and without a detectable story line. The characters were quite unattractive.

Not nice... but then that's what it was probably like - Mr. Turner review by Peteczar

Timothy Spall is amazing in this part and the film as a whole depicts a sordid and unpleasant era of art. Talent needed sponsors, artists needed inspiration. The female companions suffered.

Good film but not uplifting.

I don't usually like Mike Leigh films - that preachy, 1970s-style-improvised shtick makes me want to turn off - as does his usual condemnation of any working class character who wants to aspire to better (and this despite Leigh himself being the rich very middle class son of a doctor).

However, I have always loved Turner and it's great to see a film about him (though shocking it was largely funded by French companies, it seems!)

The plot is wafer thin, yet there are 2 limp plot points; but really, this is episodic in structure, and perhaps all the better for it, as it allows the award-winning cinematographer to create shots that mirror Turner's paintings.

I also loved hearing real Kentish dialect from Margate; these days, everything's been swallowed by Estuary English and London-speak, but there was always a distinct Kentish dialect, for those who know.

And one thing is also love about this film is it shows how someone in England from a poor background could rise to the top (and in his day Turner was really VERY rich - something this socialist director deliberately hides from view, I think). Just like Nelson, or the poet John Clare, he rose from a basic education to the forefront of his field (something leftie nationalist academics who claim that only happened in Scotland will have to acknowledge - the English have as many salt of the earth success stories as Scotland; in fact, way more).

Because it lacks the preaching and polemic, maybe this is Mike Leigh's best film (certainly since the early-mid 70s). It's a bit over-long and occasionally confusing (a who's who game is fun!). Plus, a slighter stronger plot frame to hang the painterly episodes on would have been a plus.

But lovely to see Margate and Kent in a movie!

Watch and wallow in the genius of Turner. 4 stars.

As watery thin as his paintings, this fails to engage, gives no insights or revelations (indeed the substantive 'romantic' encounters are admitted to being wholly fictional). It looks lovely. But that's not enough.

Mr.Turner (the rather dull life of) - Mr. Turner review by LB

This film is awful. It's just incredibly boring and slow with no story line what so ever. Weak and poor with a grunting and disgusting lead act.

Not an entertaining or informative film. No story line, boring, and not worth watching to the end. Disappointing and unpleasant!

Where is the passion ? - Mr. Turner review by SN

Good but not excellent. Although the film addresses what happened in the latter days of William Turner I found it missed a lot of the soul and passion that his artwork generates. The emotion that inspired his artwork, the ideas that went into creating them are totally absent in this film. What we get instead is a pedestrian insight into his life without understanding what possessed him, what drove him on. His paintings, Slaveship, The Fighting 'Téméraire and Rain, Steam and Speed are some of the most praised pieces of art because of their emotive subtext as opposed to their literal interpretation. None of that is covered by this film. It seems he paints because he can. No artists paints because they can, they paint to tell a story, express emotion, incite feeling. In this film we see nothing as to why he paints.

The acting, cinematography, direction and sets are all excellent, but without that passion it just feels a little lifeless. To give an example, Amadeus, imo, is a better film because even with the entire sub-plot of Salieri passing off Mozart's Requiem as his own work being untrue, that film addressed why Mozart loved music and why his personality got the better of his genius. Mr Turner skips that to show a methodical portrait of his latter life. What could have been great just ended up as a disappointment

Interesting but not gripping - Mr. Turner review by JD

It is a study / film biography of a strange and remarkable man. Timothy Spall is one of our greatest actors. The sets and landscape photography are truely fantastic and yet it is not a great film. It drags on, inconsequentially. It is easy to pause it almost indefinitely without really wanting or needing to see any more. Sad to see such a great potential so disasterously directed.

I had not heard about this film before, nor do I remember hearing about Mr. J.M.W. Turner, so I did not have any idea what to expect. What I found was an educating and entertaining film about a quirky, though creatively brilliant, man. The contrasting and comparing of the flawed character and his perfect creations made the work come alive, and that is why I give it a well-deserved four out of five stars.

The film follows the last twenty five years of Mr. Turner’s life. He was a quirky, yet creatively brilliant, man who created amazing pieces of art. Being close to both his father and his housekeeper, the death of the former greatly affects Turner. An occasional sexually exploitative relationship with his housekeeper ends as he grows closer to a seaside landlady. It is with her that he eventually resides until his death in 1851, while living incognito. His creativity takes him to many places, and his quirks and techniques bring both admiration and scorn. Only by learning about the man behind the paintbrush will you gain a new appreciation for the works.

Mr. Turner was not a film I would immediately choose to see. It does not fit into my ‘type’, but was well worth it.

The cinematography was a work of brilliance, and was as beautiful as the paintings created by Turner. The scenery, sets, props, and costumes were so rich and authentic and put you right into the world of the story. With the rise of illegal downloading and watching films on phone screens and computer monitors, it is good to see how this film demands a large, cinema, screen.

The film also boasting some brilliant acting. Timothy Spall is probably best known to the younger members of the audience as Wormtail from the Harry Potter series, but he is nothing like that character. Spall fully embodies Turner, and is a name more people should know. He purely becomes the quirky and grunting character that looks even more out of place next to his magnificent masterpieces.

Perhaps the best thing about Mr. Turner is that it was not given the Hollywood make-over. It was an honest telling of the story that did not have Brad Pitt playing the lead character, nor did it have a modern retelling twist.

The two-and-a-half hour runtime might be a bit too much, and it does kind of drag-on a little bit. While it was an engaging and interesting story, it might still be a bit too long for some.

So far, the film has received overwhelmingly positive reviews. This even includes postings on websites that almost seem to get the jollies out of giving films bad reviews. There has also been unconfirmed talk about possible major awards being in the offing for Spall.

Overall, a very enjoyable film that not only educates, but entertains. For those of us who had never heard the name ‘Mr. Turner’ before, you won’t forget it in the future.