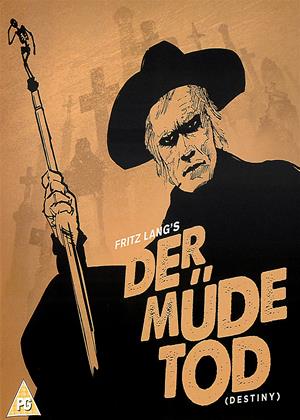 Memorable more for its imagery and masterful manufacturing of mood than its disappointingly slack storyline, 'Destiny' may not be Lang at his best, but still manages to catch the breath several times over.

There is a gaping hole in the middle, filled with three stories set in, respectively, Arabia, Venice and China. These are the kind of centuries-old tales about star-crossed lovers thwarted by caliphs, emperors, and so on. The first two are not particularly satisfactory, and make the clock tick quite slowly, but the third, revolving around a magician in a fantastically created Far East, is a tour-de-force of imagination and special effects.

The personification of Death, as performed by Bernhard Goetzke, will be remembered long after the film's viewing. That, and Lang's unsurpassed eye for what will arrest the attention, make up for the deficiencies.