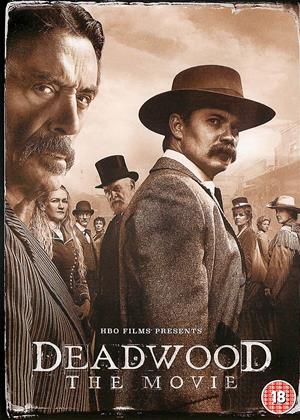 Reviews (7) of Deadwood: The Movie

One for the fans - Deadwood: The Movie review by DB

Deadwood was a great TV series and since HBO fumbled its closure fans have been promised and waited for a film that would allow the various hanging threads of the story to be brought together to a satisfactory conclusion. In the first years after the ending of s3 hopes were high but gradually faded as the sets were struck and the actors dispersed to greater or lesser successes. Its a measure of how fondly remembered the show is that 13 years after the shows demise we finally get the film we were promised and not only that but so many of the shows original caste reunited for it.

However Deadwood the TV series was an intricate, oiled and supremely well balanced engine of dialogue, set, acting and direction and it has, so to speak been out in the rain unused for a very long time. On reflection, it was unrealistic of me to expect it to spark back to life exactly as I remember it. The dialogue which once sounded so natural, now sounds a little forced and some of the characters are reprised more successfully than others. The plot is in truth light, and is told over the space of nearly two hours. In the original series the same ground might have been covered in about 25 mins and yet even with all that time on its hands many of the most colourful characters only get a few minutes of screentime.

For fans of the show I find myself conflicted between advising you to watch the movie or to remember the show at its height instead. Perhaps the best I can suggest is that you watch the movie but come to it with a less expectations of it than I did.

For those who don't know the TV series and are wondering if the movie can be watched on its own merits I would say yes but I would advise against it, the show had a lot of characters and in allowing all of them to have a bit of screentime makes the move 'flit' around a lot in a way I'm not sure I'd be able to make sense of if I hadn't seen the show. Instead I'd advise you to watch the original series, then at least, you'll understand what all the fuss was about.

Well, I guess the film finally tied up the threads from the TV series but that's about all. Shame they didn't seem to worry about having a good storyline for the movie itself. What a shame; the series was superb in so many ways - this film was just kinda meh.

Not the real thing - Deadwood: The Movie review by TE

Both previous reviews sum it up well: watch the HBO box-set of the original Deadwood if you haven't already seen it, it is a great series, full of the darkness of the violent, greedy creation of the USA. And it is full of memorable characters and fresh, original dialogue.

This film is of interest to Deadwood fans, but mainly to confirm how good the original was.

Here the emphasis is on happy endings and consoling redemptions. It is as if the blandest team in the Disney studios were to do a movie sequel to The Wire.

As others have said, the original TV series of Deadwood was wonderful, classic, 5 stars and near perfect - a shame that HBO cancelled it and would not make a 4th series. FOR SHAME!

This spin-off movie is mediocre and, sadly, it has become infected with the pc-box-ticking diversity #metoo virus like so many Hollywood movies now too SO we simply must have empowered strong and independent women storylines (even same sex relationship too) and of course a racism theme with a black character (rare is a modern movie that does not have this trite cliched theme these days). Yawn. Seen it all a million times now and IT IS BORING. Yes, we get the message: racism is BAD; women can DO STUFF. Blah blah blah. Stop the polemic and lectures. ENOUGH ALREADY!

A wafer-thin plot that takes a while to get going make this like one of the weaker episodes of the TV series.

What makes it great is seeing the old characters again esp Ian McShane who, in the UK, will forever be Lovejoy the dodgy antiques dealer from the 1980s TV series. He fits the role perfectly and steals every scene - unlike some others (too much deliberate focus on the female characters makes the film lose focus, ironically). McShane is on top coughing form. The dialogue is nice and fruity too! Almost baroque.

No spoilers but the final act is wonderful really (it helps to know the characters backstory from the TV series though to make sense of the use of music etc).

Good to see Mr Wu again and make good use of his pigs, He has a boy now too, which doubles the south-east Asian diversity quota.

So really, forgettable and a bit of a vanity project, one feels. And sad no more TV series BUT makes me want to watch all 3 TV series again because Deadwood is certainly one of the best TV drama series of the last 15 years, and maybe the best ever depiction of the 'Wild West' or, at least, South Dakota in the late 19th century.

Disappointing given the reputation of the series - Deadwood: The Movie review by CD

I concur with other reviewers in being disappointed with the film, although had only seen a few of the Deadwood TV series many years back. You know you are in for a mixed experience within the first 2 scenes where characters arrive and then are not developed properly in the film. The dialogue is quite interesting with some effort to make it (how one imagines) people might have spoken in the late 19th century. Half way through you realise that this is going towards a predictable conclusion, and you may be tempted to reach for the fast forward button just to make sure.

Couldn’t stand watching this for more than 15 mins,

Having not seen the series I enjoyed this one off western, which kept me glued and the time just flew bye.  Excellent performances from the cast and in particular Ian McShane as the saloon owner pulling strings from his death bed.