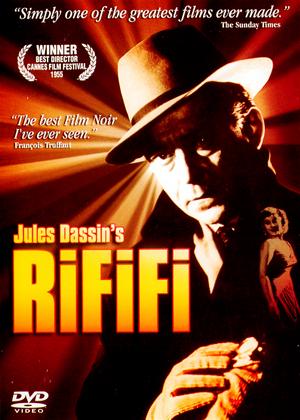 I cannot remember a film in which the opening credits received such a gloriously over the top score. It sets the mood for the film you are about to see and yet during the most dramatic scene, the thirty minute burglary, there is no background score and indeed any dialogue.

The performances are excellent, in particular Jean Servais the ex-con with the tortured deadpan face.

There is violence aplenty but not in the graphic way of modern films. The deaths are made more poignant without the gory details

A fine entry in the tradition of hard-boiled crime tales. The b/w print is excellent and the narrative is taut, even in the long near-silent robbery scene.

Rififi is more of a 'grown-ups' film than many US and British equivalents. The belt whipping of the lead female character is challenging, as is the dangerous position the small child is put in. However, most of the violence is not visually explicit.

"Rififi" has to be one of the great movie titles: the meaning of the word is hinted at in a slinky nightclub song, but we are left to sweep the whole plot and the journey of the characters into that one word.

This is the ultimate heist movie. It scores five stars all the way. A brilliant piece of film making, set in 1950s Paris.

The ingenious plot trips along at a sprightly pace with never a dull moment. The characters are strong, convincing and well acted: even the little boy is brilliant. Unusually, the meticulously prepared robbery is shown in detail, in almost total silence. The violence is implicit but is always cleverly concealed. C'est magnifique.

Such this film is much more gritty than anything the US or the UK would have produced at the time, and feels more in line with the heist movies made in later decades. There are some great scenes, notably the silent scene of the heist itself, and the film has everything you'd get in modern cinema in terms of car chases, violence and a bit of rumpy pumpy!