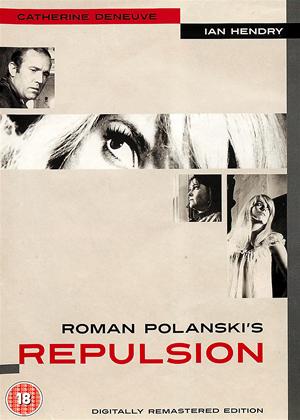 Deneuve gives an astonishing performance early in her career here. She plays Carol, a young innocent woman who lives with her sister in London.

A stunning young lady who is sexually repressed and as such this leads to a slow mental breakdown, culminating in an irrational fear of men.

Left alone in the flat, her brain begins to meltdown in the claustrophobic , haunting surroundings.

The going off of a cooked rabbit in the kitchen a symbol of her cerebral deterioration. Sexual hallucinations follow, which lead to actions in the real world.

Shot in black and white, which suits the film perfectly, this is a very arty piece of cinema. Fans of this genre should really appreciate this class film. Fantastic.

This is often known as ‘Roman Polanski’s Repulsion’, so inter-twined is the director and this piece of work. Catherine Deneuve plays listless Carol, a stunning blond who acts like the dowdiest wallflower you could meet. She lives with her sister Helen (Yvonne Furneaux), married boyfriend Michael (Ian Hendry) and is pursued – without much success – by Colin (John Fraser). The attention to minutiae in the dilapidated building is not dissimilar to the location in Polanski’s ‘The Tenant (1976)’.

In fact, that is not the only similarity – Carol could be a relation of the other film’s central Trelkovsky character; she even knocks heads with Colin as Trelkovsky does with Isabelle Adjani’s Stella in a similar scene in the later film. Equally, her comparable descent from being merely preoccupied to full paranoia to the point of hallucination adds to this exploration into her increasingly fragile mental state.

As a shocking tale of someone sliding into insanity, I found this effective, but unfairly, I feel it has dated in a way that ‘The Tenant’ has not. It is still a persuasive and occasionally unnerving depiction of madness. Deneuve is very good in it, as is the rest of the cast, and Polanski makes the most of her increasing physical and mental isolation.