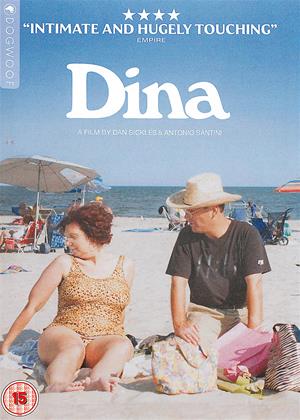 Synopsis:
Dina's getting married in a few weeks and there's still so much to do. She has to move her boyfriend, Scott, from his parents' house to her apartment, and settle him in to only the second home he's ever had, all while juggling his schedule as an early morning Walmart door greeter. She has to get her dress, confirm arrangements with the venue, and make peace with her family, who remain nervous for their beloved Dina after the death of her first husband and the string of troubled relationships that followed. Throughout it all, in the face of obstacles large and small, Dina remains indomitable.
She's overcome tragedy and found the man she wants and, at age 48, is bent on building the life for herself that she believes she deserves. Dina is unstoppable, a force of nature, and as the star of her own life story, she's an unconventional movie protagonist the likes of which hasn't been seen before.
Actors:
Dina Buno, Scott Levin
Directors:
Antonio Santini, Dan Sickles
Producers:
Antonio Santini, Dan Sickles
Others:
Dan Sickles, Antonio Santini
Studio:
Dogwoof
Genres:
Documentary, Romance, Special Interest
Awards:

Sign up
Encounters at the End of the World

What is the point of this movie??? - Dina review by VP

Absolutely boring, 10 minutes of it felt like two hours. Nothing funny, nothing inspiring, zero entertainment value. Seriously, even average person's life is not this boring. Why to document people to brush their teeth? It is absolutely disgusting. I regret to order this movie, what a waste!!!

There’s something simple and refreshing about the approach to autism within Dina. The more film-worthy subjects on the mental condition usually tend to either focus on kids having problems adjusting and older adults who are given guidance. Many films depict autistic people in need of some help with either their daily living or an inspiration to carry on and succeed. Dina focuses on the lesser-seen picture of autism; the older kind. Dina is not some deeply hindered woman who can’t form words or requires constant care. She’s also not a brilliant prodigy at anything in particular. She has the look and feels of an ordinary small-town woman getting ready for her wedding. And there’s just something so inspiring about that simplicity.

Throughout this quiet look at small-town life, we get to see a couple of Dina and Scott, both with a form of autism, come together for their wedding. Dina is a vocal and energetic woman about town, chatting it up with everyone at the hair salon and eager to be married. Scott is far quieter and contemplative but still open enough with his affections. While the camera could be labeled as not seeing the full picture, Dina and Scott seem content around each other. They speak frankly and openly about everything, where a trip to the beach can lead to them earnestly talking about sex. While Dina gets giddy for a bachelorette party, Scott plans to study up on song and dance to be the hit of the wedding ceremony.

Life isn’t all roses for the two. They have their own spats that are emotionally draining for both if not all that big to an outsider in how they go the distance at times. Other times, their coziness is more about proximity. We see them at their most relaxed when they’re just watching TV together without saying much. There is a bigger secret that Dina is concealing and its a traumatic experience so tough to talk about she never brings it up. We see glimpses of the past on her body but rarely is it discussed even in Dina’s own manner of speaking directly. It’s not until the third act that we let an emergency call do all the talking of a relationship that went the wrong way and left a deep scar on Dina’s soul.

So much of the film has this quaint mundanity to it all. Dina’s apartment is a very small place, just barely big enough for a bachelorette party to transpire. Their wedding photos are taken in front of a diner window, the patrons clearly visible from above as the pictures are taken. The wedding reception is held in a community room that has a cozy appeal in its vanilla-like setting. Compare all of this to Dina and Scott occupying a honeymoon sweet with a whirlpool that resembles a giant cocktail glass. They awkwardly enjoy it but the truth is they don’t need a whole lot to be happy, made evident by a somewhat simple end to their event as they enter into the next stage of their relationship.

As someone with autism, this documentary has a sincerity that was emotionally tugging for what little is said in the relationship of Dina and Scott. There are no talking heads trying to describe Dina to the audience, nor is there a scene where Dina speaks directly to the camera to try and explain herself in some reality show format. We merely observe her in an event where not a lot happens. And that’s the point as the documentary normalizes autism rather than fully hide behind explanations that may fall short. Everything is said by merely observing, making Dina perhaps the most humanizing film on the subject of autism.