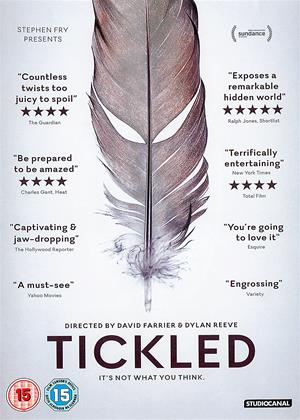 Synopsis:
After stumbling upon a bizarre "competitive endurance tickling" video online, reporter David Farrier reaches out to request a story from the company. But the reply he receives is shocking - the sender threatens extreme legal action should he dig any deeper. So, like any good journalist confronted by a bully, he does just the opposite: he travels to the hidden tickling facilities in Los Angeles and uncovers a vast empire, known for harassing and harming the lives of those who protest their involvement in these films. The more he investigates, the stranger it gets, discovering secret identities and criminal activity.
Discovering the truth becomes Farrier's obsession, despite increasingly sinister threats and warnings. With humour and determination, Farrier and co-director Dylan Reeve summon up every resource available to get to the bottom of this tickling wormhole.
Actors:
David Farrier, Dylan Reeve, David Starr, Hal Karp, David D'Amato, Dave Anthony, Gareth Reynolds
Directors:
David Farrier, Dylan Reeve
Producers:
Carthew Neal
Aka:
Tickle King
Studio:
StudioCanal
Genres:
Documentary, Special Interest
Countries:
New Zealand

STARTS OFF INVESTIGATING TICKLING PHENOMENA.THEN TAKES DIFF TURNING WHOS BEHIND IT AND WHY?. INTERVIEWS PEOPLE WHO TAKEN PART,GIVES YOU GOOD INSIGHT WHY PEOPLE WANT DO IT,CREEPY

This is a comedy set out as a detective documentary. I did not think it was funny and turned it off.

Right there within Taika Waititi’s ‘turn for the bizarrely comical’ range, Tickled is yet another proof that New Zealand filmmakers (in this case directors David Farrier and Dylan Reeve) constantly drive the art of cinema in new, yet unexplored directions – for better or worse. One thing however is certain: Tickled would probably be the most unusual, inventive and (probably) macabre documentary you will see this year, regardless of what calendar year you happen to exist in. And for that and that only: Tickled is worth seeing at least two consecutive times in a row.

Tickled: a documentary about a guy who finds himself in the most unusual of circumstances after a session spent online. Basically, journalist David Farrier (also the movie’s director) ‘roams’ around the Internet until he stumbles upon a seemingly fun competition that turns out for the, well, bizarre. To say how and why would utterly spoil the film, so you’re left to your own merit to find out what really takes place in this provocative piece of celluloid tape.

Furthermore, it is often said for fictitious films to have plots, while documentaries employ premises. David Farrier takes this as his axiom upon which he builds a very competent film that poses more questions than what little answers it offers. The premise he tries to deconstruct is so tightly guarded that even he, a professional fringe phenomena ‘exposer’, is left to ponder as to why exactly these cult-like members deny him access to their little, for now use the term game.

What’s more, Farrier and his co-director’s unapologetic approach yields results that dig deep in the rabbit hole – rendering life, as the saying goes: stranger than fiction. Farrier knows he is up to something big and makes everything in his investigative power to find out what he really involved himself in.

Tickled stars out as an innocent comedy, and quickly devolves into a sinister thriller unparalleled in every sense of the word. Forget Dan Brown’s fictitious historical espionage, or Snowden’s real-world whistleblowing for which he endangered not only himself, but his closest also – Tickled is everything these two are, times 10 on the bizarre factor scale.

When it comes to production, David and Dylan’s piece it top-notch, employing some guerilla filming techniques like door-to-door quarreling, online forensics and inventive investigative cases where everything goes. In turn, this approach yields the best results for us, the audience to appreciate the film on a technical scale. Hurray for New Zealand and its creative residents!

Ultimately, Tickled will leave you empty, fulfilled and everything in-between those feelings, times infinity. It’s so strange a tale that probably deserves a time off your day: time after you will never look at 'funny' advertisements the same way again.