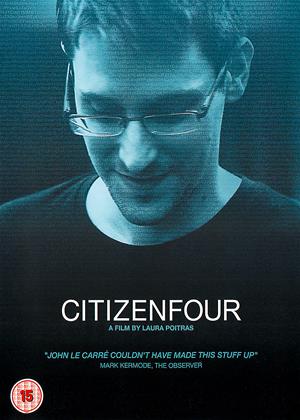 Synopsis:
"Citizenfour" is a real life thriller, unfolding by the minute, giving audiences unprecedented access to Laura Poitras, Ewen MacAskill and Glenn Greenwald's encounters with Edward Snowden in Hong Kong, as he hands over classified documents providing evidence of mass indiscriminate and illegal invasions of privacy by the National Security Agency (NSA). Poitras had already been working on a film about surveillance for two years when Snowden contacted her, using the name "Citizenfour", in January 2013. He reached out to her because he knew she had long been a target of government surveillance, stopped at airports numerous times, and had refused to be intimidated.
When Snowden revealed he was a high-level analyst driven to expose the massive surveillance of Americans by the NSA, Poitras persuaded him to let her film. "Citizenfour" places you in the room with Poitras, MacAskill, Greenwald, and Snowden as they attempt to manage the media storm raging outside, forced to make quick decisions that will impact their lives and all of those around them. "Citizenfour" not only shows you the dangers of governmental surveillance - it makes you feel them. After seeing the film, you will never think the same way about your phone, email, credit card, web browser, or profile, ever again.
Actors:
Edward Snowden, Glenn Greenwald, William Binney, Jacob Appelbaum, Ewen MacAskill, Jeremy Scahill, M. Margaret McKeown, Kevin Bankston, Harry Pregerson, H. Thomas Byron, Michael Daly Hawkins, Jonathan Man, José Casado, Roberto Kaz, Julian Borger, Paul Johnson, Nick Hopkins, Julian Assange, Marcel Bosonnet, Wolfgang Kaleck
Directors:
Laura Poitras
Producers:
Mathilde Bonnefoy, Laura Poitras, Dirk Wilutzky
Voiced By:
Robert Tibbo
Others:
Mathilde Bonnefoy, Dirk Wilutzky
Studio:
Dogwoof
Genres:
Documentary
Awards:

This excellent documentary was conceived, filmed and produced by Laura Poitras. Edward Snowden had contacted her letting her know that he was going to be leaking secret information about NSA spying on American citizens as well as othe countries. Watching it, I wished it were just a scary sci fi and not a true story. At the beginning, Edward Snowden and the NSA whistleblower William Binney look fresh, energetic and hopeful. It is heartbreaking to see their transformation by the end of the documentary. Both are now pale, flabby, have dark circles beneath their eyes and havea haunted almost dead look. Glenn Greenwald and The Guardian broke the story. Before seeing the documentary I didn’t know what to think, now I see Snowden, Binney, Poitras and Grrenwald as heroes. I cannot see that Snowden will ever be a free man. He gave his life to inform and educate the American public.

The special features are well worth seeing.

This documentary film, very well made and captivating from start to finish, is a must-see. It is about Edward Snowden and what he revealed regarding the wholesale electronic surveillance that we -- all of us -- are the target of. It focuses more particularly on the activities of the NSA spying agency in the USA (E Snowden worked for them after working for the CIA) and its British counterpart, GCHQ.

We knew about it but, when you see the film, it really hits you; it is the secrecy around it and the scale of it. After 9/11, the intelligence community started collecting data pre-emptively on a huge -- absolutely huge -- scale. The idea is to store zillions of pieces of data (including the content of emails, allegedly) and, when the moment comes, with the right algorithms, an intelligence officer can pull up 10 years of a person's phone calls, text messages, Google searches, emails, etc., thanks to data mining. In other words, the agencies do not target 'suspects' but everyone, pre-emptively, in case it may be useful later. There is no privacy. They can access almost anything and everything, including SIM cards made by a company such as Gemalto.

What is interesting is that the film claims that GCHQ does even more of this than the NSA, and is a leader in this field: good for our security, no doubt, but rather worrying in terms of the average person's privacy. The Guardian reported on E Snowden's statements and the documents he gave them, as you may remember, but was threatened with a D-notice from the government. Basically, they only divulged a tiny proportion of the documents and, then, the whole matter was suppressed in the UK, which is revealing of how things are handled in Britain. The risk is, of course, that the country may become a police state in due course. It also depends on who is in power. I can think of a few dangerous political leaders on the Right and the Left right now, in Britain, who may not play by any rules once in power...

Having seen the film, you wonder whether anything has changed: I doubt it. Of course some surveillance is needed, but where are the safeguards and the checks & balances? Another thought crossed my mind: what about E Snowden? It is clear he was not 'a traitor' and acted out of a sense of indignation at what he saw as shocking practices. On the other hand, it is claimed what he did damaged Western intelligence services. One claim is that China and Russia managed to access 1 million documents collected by E Snowden (and it may have been without his involvement as such: they may have managed to hack into a cache of data).

Also, it is impossible to imagine that Russia did not 'debrief' him. It is hard to imagine that he would have been able to stay in Russia without giving them any information at all (he has been given temporary residency rights there). Given the nature of the Russian State, there must have been a quid pro quo. One last point: what E Snowden denounces was put in place on a big scale under B Obama, who was never the squeaky-clean liberal that so many people like to believe he was.

Next time you send a text message or write an email, remember to greet the NSA/ GCHQ operative who is reading it! :-)

Ok so I personally do not have much of an opinion on this subject matter but was drawn into the film due to the events being captured as they happened to such great effect and the tensions that built as the scandal unfolded... expertly put together documentary, well worth a watch even if you are like me not terribly interested in the whole films take on the thorny issue of privacy...

Citizenfour is a documentary of a rare breed – one without obvious antagonists, goals or moral parables. It doesn’t try to teach you anything, least of what’s right or wrong, where the classical “show, don’t tell” is replaced with “tell, don’t overkill” – and such approach yields for a stunning revealing testimony. Poitras meticulously edited the material to show the truth as it unraveled real-time, and one can almost sense the looming presence of a cyber-entity, waiting to bring order (moreover: damage control) in the chaos of what Snowden is about to unleash – the entity that would later become the infamous NSA.

The director’s decision to let people speak for themselves while omitting all commentary (except for several messages at the start), undoubtedly proves as the right approach, and as tension slowly pumps blood in the arteries of all parties involved, Snowden never loses his cool and elaborates proofs that send shivers in the viewers’ crackling spines. Sometimes even the silence speaks volumes of what is about to happen, and it usually topples whichever revelation came before it.

The story is one well known – elevated to become an integral part of current American pop-culture, but still: Citizenfour surprises when you least expect it; it is a deadly waltz between the hunter and hunted with unpredictable outcomes and uncertain, ambivalent character motivations. Is Greenwald trying to get the truth, or advance his career forward? Why does Poitras get to film the whole ordeal as it happens? Is Snowden a traitor, a hero, or neither?

His room (a hotel in Hong Kong) slowly transforms into an unnerving setting – each consecutive encounter with the journalists raises bets, apostrophizing the risk of getting caught at any given time. As he realizes the point of no return, verbal communication boils down to a minimum – instead, an old fashioned pen and paper is used. In a world where the watchmen go unwatched – you cannot trust anyone.

Then there’s the techno-talk. Despite the urge to try and not understand the ongoing conversations between Greenwald, Snowden and Poitras, one does – and that’s what scares the most. It is obviously clear the national security has been breached: and it must have something to do with encryption and computers. Since everyone uses such devices, it means no one is safe anymore.

Citizenfour, the name under which Edward Snowden contacted Laura Poitras, is not non-fiction, not even a real documentary. It’s a testimony of a state agent-turned-whistleblower, who realized his obligations to the universal freedom of speech to be bigger than the papers he signed when getting the job he later exposed. It raises more questions than giving answers, and shows UK’s role as a catalyst of conducting USA’s unauthorized tapping program. And symptomatically enough, USA’s biggest adversary – Russia – offers Snowden a safe haven through political asylum.

Citizenfour is perhaps the biggest real thriller of 2014.