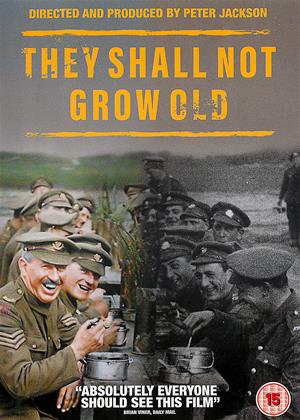 Synopsis:
Marking the centenary of the First World War, the internationally renowned director Peter Jackson (The Hobbit and The Lord of the Rings trilogies) uses the voices of the veterans combined with original archival footage to bring to life the reality of war on the front line for a whole new generation. Footage has been colourised and transformed with modern production techniques to present never before seen detail.
Directors:
Peter Jackson
Producers:
Clare Olssen, Peter Jackson
Studio:
Warner
Genres:
British Films, Children & Family, Documentary, Special Interest
Countries:
UK

Rent other films like They Shall Not Grow Old

Reviews (4) of They Shall Not Grow Old

Back to life - They Shall Not Grow Old review by NC

In the days of Isis, gang stabbings, and little children horrifically murdered by 16 year olds, it may be a saving grace that all the people in this film are not here to see our brave new world!

Wish my grandad was still here to see this. Amazing how much effort must have gone into making these old newsreels spring to life.

They should indeed never grow old. They are a constant reminder what a rubbish job we are doing today.

Grandad always said the very best were killed. I had a stepfather who was in Burma in the second world war......and he said much the same.

Maybe one of the reasons we have such poor examples leading things at the moment. Maybe one day we will have a democracy, and common sense will prevail, but slim hope.

A fascinating film to watch, and the commentary that goes with it highlighting life as it was in the trenches and the camaraderie that endured through the war years between the men in the trenches etc.

Moving documentary - They Shall Not Grow Old review by TH

This was a really stunning documentary looking at the lives of these brave men. The move into colour enhances everything. I made not revisit this but I would recommend everyone to watch this at least once.

A MUST WATCH - They Shall Not Grow Old review by DG

This is a must watch if you are at all interest in the history of the Great War. Very well made documentary and the restoration work adds a whole new level to it.

They Shall Not Grow Old review by Mark McPherson - Cinema Paradiso

I’m sure the utterance of a World War 1 documentary doesn’t exactly evoke the most enticing of entertainment. What more can be said from a war so far in the past that hasn’t been stated from dozens upon dozens of TV specials with archival footage and stuffy narration? But in comes Peter Jackson to revitalize the subject of WW1 with one of the grandest theatrical treatments. If there were ever a documentary this decade that brought history to life, They Shall Not Grow Old is a jolt of a picture that digs in deep to the personal perspective of the war and never lets us go.

I’m especially interested to see how young people respond to the picture, as I have no doubt they’ll probably end up watching this film in history class (I hope they will). The film begins with the small, jittery, and black and white footage of England, setting the tone for when the British soldiers would be entering the war. We hear the flicker of the old projection footage but mostly the personal stories of the soldiers who went off to war, letting us in on the atmosphere of the time with young men lying about their age and not questioning their service. It’s good stuff but is presented rather dry that I could see some student groaning 10 minutes about how this format was going to be the whole film.

But if they stick with it, they’ll find some extraordinary as the film goes on. When we finally head to the battlefield, the frame enlarges, the footage more vivid, color transitions, and the sounds of the trenches can be heard. The narration of soldiers continues on with detail but now the archival war footage takes on a whole new dimension in trying to understand this war. We learn every detail of what it was like to serve in the British military, from food ate in the trenches to how dead bodies were handled. Combat is addressed in a very honest manner more than dramatic, showcasing how young men were more concerned with not being hit than carrying too much about who had been shot down around them. There’s empathy between the English soldiers and the German prisoners when all is said and done that the men who served have a far simpler view of the world, that death is not preferable.

Jackson’s film is a tireless effort of cobbling together mountains of stories and footage from archives to create something that gives the best perspective of what it was like to be an enlisted young person from a century ago. The boldest of choices was for depicting scenes of war and death, Jackson cuts between footage of soldiers living and then lying dead on the ground. The audio continues to tell stories of how the soldiers continued fighting, giving us an idea of the type of attitudes and motivations on the field of combat. It hit me fast as the stories continue on in rapid fire.

Another bold choice: when the war is over, the frame pushes back and the black and white returns. The soldier stories are told of how they were not recognized for their efforts. Very few talked about the war after it ended and civilians had very little interest in what went on with the battles. As the film stresses, it was just what you did back then, rarely questioning the politics or bigger picture of it all.

They Shall Not Grow Old has had a very limited theatrical engagement here in the states but it should not go missed for one of the best uses of 3D in the theater I’ve ever seen. I can only hope that as word spreads of how profound and personal such a film is that it’ll warrant special return screenings for all to enjoy. I’m sure it’ll still be just as powerful on home video but the film is best served on the big screen and in 3D.