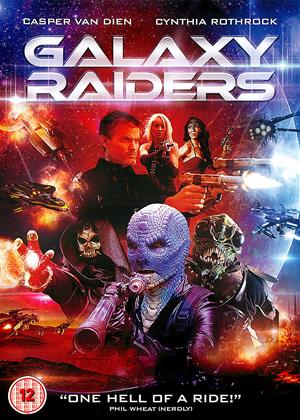 Whether it’s a cheap ‘Guardians of the Galaxy’ knock-off, a passion project, or bold excursion in both material resources and time, Galaxy Raiders is most definitely not the best movie in the history of time, but it’s not the worst at that either. This film features Casper Van Dien in his latest low-budget tryouts but they, at least it looks like the guy’s enjoying himself, so who cares. Finally, the rest of the acting crew does a ‘decent enough’ job to make this flick at least barely watchable, given the woeful script, sub-par narrative, and the cheap visuals that make some YouTube videos look like Orson Welles’ passion projects.

The film checks all boxes of a cheesy, old school space opera, including, but not limited to: protagonist meets two girls (one Alien, one almost human); protagonist and girls save the world (kinda); main villain escapes to leave room for potential sequels (the Marvel curse?); finally, protagonist and one of the girls fall in love and roll credits!

When breaking it down like this, it’s kind of unfair to the crew that worked on the film but it’s also necessary to provide context for further deconstruction of an otherwise flawed but an experience with promising potential.

When it comes to its technical details, Galaxy Raiders fails in every imaginable way, and that’s putting it lightly. It’s as if the whole thing was part of a “Command & Conquer Red Alert 2” cinematic experience, which by the way had an excellent cheesy story to accompany its campaign. But I digress.

The set-pieces were laughably incoherent (although I’m sure the crew did their best with the budget that they had), the music, sound production, and sound effects were sub-par, and the visual effects were, let’s just say “unnecessary” and leave it at that.

The acting on the other hand, was decent enough to a point of being passable. It seems as if all of the actors involved tried their best (including Casper Van Dien) to make the most out of their scripts, and one can almost recognize through these efforts and appreciate them for what they are. Further, by this point you’d almost realized that the similarities between Galaxy Raiders and Power Rangers are plentiful, and this would be true. Nothing more to add.

Finally, is Galaxy Raiders worth watching at least once? The answer would be: it depends. If you’re into low-budget, Power-Ranger-type cheese-fests with Casper Van Dien exclaiming ‘Starship Troopers’ lines whilst the visuals and sound assault both your eyes and your eardrums, then yes, Galaxy Raiders should definitely end up on your film list.