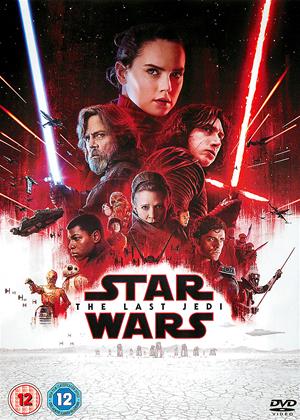 Rent other films like Star Wars: The Last Jedi

The force is WEAK with this movie - Star Wars: The Last Jedi review by William London

I would like to apologize for ever saying that Episode I was bad. I'm so sorry. You had a clear direction in your mind for Star Wars. And Episode I had an original story that made sense.

Episode I was SO MUCH BETTER than this Last Jedi turd. This patchwork of a movie is made of countless scenes taken from your original trilogy that it would be classified as a rip-off had it not been made by the new owner of your Intellectual Property.

Last Jedi is more an action movie like a recent Mission Impossible. I giggled a few times while watching it. But there was no suspense. Last Jedi is probably comparable to Beverly Hills cop IV. People watched it without expectations and that movie faded very quickly from memory. Last Jedi is as interesting as a mid-season episode of The Walking Dead.

People who made this movie had no idea of the material they were working on. Luke was THE hero in Star Wars and he is portrayed in such a terrible way. I feel cheated by his presence. Mark Hamill should not have accepted to play Luke again with such a script, but Disney probably made him a cheque he could not refuse. And the Science-Fiction in this movie is just Fantasy.

This movie was empty.

Couldn't disagree with the official critic more, who obviously has no understanding of the Star Wars legacy. Worse than that though, neither did the writer/director. Luke Skywalker was almost unrecognisable as a character, and I don't mean physically - although they might as well have used a different actor and saved themselves a few quid, it wouldn't have been any worse. Sure he had to be allowed to age and also evolve as we all do, but this bloke had nothing in common with the Luke Skywalker of the original films.

After that, nothing else about the film seems to matter much. C3P0 and R2D2 continued to be relegated to token cameo roles, may as well not have bothered. Of the new actors, Finn, Rey and Kylo Ren all had less convincing performances than in the last film. While I was really looking forward to this film. I am dreading the next one.

I genuinely dislike this movie & cannot understand why it has been given so many good reviews (eg: non-sensical plot, no continuity with the previous films, ridiculous story elements, poor jokes etc).

Boring drivel I'm afraid, first film in a long time I failed to finish. Nothing about this film was enjoyable. Acting, humour,plot, all fail to deliver big time

Another instalment of the franchise that dumbed sci-fi down to the level of a children’s video game. It opens with the same old space battle to John Williams’ excruciating bombastic score, but what else did you expect? As in the previous instalment, the only character with any charisma, although he has little to do, is Ben the Baddie (Adam Driver). Ade Edmondson appears briefly but it’s a missed opportunity. If only he was playing his Vivien character from The Young Ones, come to wreak havoc and add some interest to affairs. At a grinding 146 minutes, this is for mindless drones only.

One of the top four star wars films - Star Wars: The Last Jedi review by GJ

Like the force , this film isn't just about one person , despite the title . It's about the path taken by several people . It's about accepting who they are and doesn't underestimate the attraction of the dark side.

It's a careful and confident film . I wished I had watched the force awakens more recently as each character is introduced , however i found myself enjoying each new character as I became more familiar.

If there is one slight complaint , there is one segment that deviates from the rest of the film and don't think it that segment was necessary to introduce a particular character and the casino setting reminds me of something you would see in the George Lucas prequels

Besides that , it's the first star wars film I've enjoyed since Empire Strikes Back ... Rogue one ..ended great but for me the first half dragged and seemed padded.

I think director and writer Rhian Johnson should be allowed to finish his vision with the next film and I look forward to the next one.

First of all the Star Wars series that I didn't finish watching.....utter drivel, very disappointing.....got so bored 30 minutes in I stopped watching! Poor plotting......difficult to give it even one star

HopefullyThe Last Of The Jedi - Star Wars: The Last Jedi review by Ralphy

How very sad to see Star Wars come to this. An overlong film with poor acting that even the special affects and battle scenes couldn't save. It's about time they put this franchise to sleep (as did this episode to me)! Steer well clear unless you are an insomniac.

The Defenestration of Star Wars - Star Wars: The Last Jedi review by TE

You thought Episodes 1-3 weren't very good? Ha, think again. They were master pieces of story telling and cinema compared (so I am starting to believe) to where the latest trilogy are heading.

It's hard not to throw out spoilers to point out the silliness SW has become but some much what the plot and characters could have become from (the not good but not bad either) Eps 7 has been tossed out the window without a second thought, to be replaced by a thin gruel of, well, twaddle.

Or perhaps it was to give the story twists and turns? keep audiences on the edge of their seats maybe?? eh?

Well, it can twist as twisty as it wants - this film is rubbish.

At least we didn't have to fork out for a trip to the cinema, so that gets it one star.

What are they doing with this latest trilogy, the are destroying what should of been great films. This is the worst out of all of them now. Totally just making films instead of respecting what Star Wars is. Such a shame.

Writer/director Rian Johnson had recently announced that he would be helming an entirely new Star Wars trilogy all his own. After viewing The Last Jedi, it’s easy to see why. His entry into the latest Star Wars trilogy, both written and directed by Johnson, is bursting with ideas, arcs, mythos, and characters that are enough to fill at least two movies. For audiences that feel cheated with bridge movies, you need not worry about this Star Wars picture. Johnson doesn’t waste our time, and he doesn’t leave plot arcs unresolved. In a cinema landscape where most films like to stew and brew their franchises for the long haul, here is a film that refreshingly asks of itself “Why not finish these arcs now?” For such a bold take, Johnson’s film gives the most bang for the buck. Almost too much.

Having firmly established the new crop of heroes and villain for the continuing saga, The Last Jedi expands on the familiar characters with a depth that was lacking from The Force Awakens. The Resistance fighter Poe (Oscar Isaac) felt like a bookend afterthought of a hero, but now he takes center stage as a leader. He leads fleets into battle against the evil armada of The First Order but has more grit than smarts, ordering his men into suicide mission under the guise of “we can win this now.” Finn (John Boyega) still has some First Order knowledge to save the day as a turncoat but has to learn better how to work with others. Elsewhere, Rey (Daisy Ridley) seeks the guidance on the ways of the force from the legendary Luke Skywalker (Mark Hamill), but she may not be ready for what she discovers. And the evil Kylo Ren (Adam Driver) still has some demons to face and a past to confront.

To what may be the dismay of many Star Wars fans, Johnson has decided to rewrite a bit of the rulebook to conceive his own tale of doubt and letting go of the past. For conceiving such a story, it's almost guaranteed that this film will be disappointing with its revelations, showdowns and character deaths for all the hype surrounding them. If you can set your fan theories aside, however, there’s a compelling story present that fits well with film’s theme of looking more towards the future than referencing the past. This makes Rey’s shocking discovery of who her parents were more meaningful than logistical. It also makes Luke’s massive change in attitude towards the Force seem more crucial to the plot than hitting all the expected Skywalker-isms.

The biggest problem with the picture is that Johnson has so much to deliver that he often rushes the audience along, making the 150+ minutes just zoom by. As a result, many of the more meaningful and emotional scenes don’t stew enough to pack a big punch. The biggest detriment is to Rey’s teachings of the Force, more hitting the expected beats of confronting the dark side than being a genuine surprise. It really sticks out like a sore thumb when such a dramatic and emotional journey must share screen time with Finn’s wild casino planet adventure. While the showdowns are pleasing for the third act, many of them come so fast that there’s rarely a moment to feel the drive behind them. This is especially true with Finn's big battle with Captain Phasma. Considering Phasma doesn’t appear in the film until the showdown, their feud doesn’t feel as cohesive in this picture as it did in The Force Awakens. But if you really wanted to see the two duke it out in a flaming hangar bay, there you go.

The Last Jedi may seem overly divergent for tossing so much in the air and playing it loose with the Star Wars mythos, but it’s a very welcome change to a franchise in need of some cage-rattling. At its core, however, are all the familiar Star Wars traits that make this series so grand. There’s a somberness to the film’s darker tone, but a lot of humor brings levity in the form of Poe’s prank call transmission to the enemy, Luke’s perfectly timed commentary on Rey’s life and those cute little Porg creatures. There’s real grit to this film’s large-scale battles, spanning from the high-stakes bombing of a First Order warship to a final-stand defense on a planet of salt. More importantly, the film is a constant surprise of who will die next, who will shoot first, and who will make a sacrifice. If you don’t like bridge films that leave you hanging, rest assured, Johnson won’t leave you exiting the theater with the groan of a child who has to go to bed before finishing a bedtime story. Johnson lets us stay up to hear that wicked fourth act with the most impressive display of Luke’s heroic abilities.