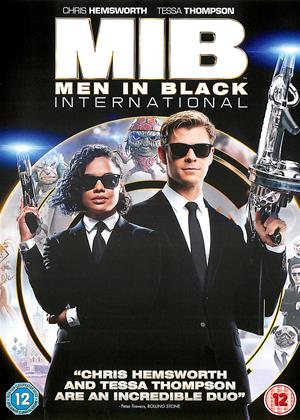 Reviews (9) of Men in Black: International

All three sequels are forgettable and I only saw the newest one last night. I keep on going back for more but the magic of the first MIB is beginning to look like a fleet footed ghost that cannot be bottled up and sold again and again. Will Smith & Tommy Lee Jones came back for two more sequels but were wise to give this new one the swerve as its attempts at invention and fun fall flat again and again. Maybe, I'm getting too old for MIB but if films like Guardians of the Galaxy and Logan can draw me then this has missed a giant trick.

See the cinema paradiso review because I essay my thoughts better an I agree with his thoughts. I will add though that the character keep on referring to H's (Chris Hemsworth) former glory days, that he's coasting and that the joy has gone. It's almost as if they are talking about the acotr himself who looks stoned and very bored. Tessa Thompson is too vapid to make much of an impression, her origin story and rise to the top of the ranks is faster than a Rocky montage on fast forward and you never get to know her.

It's a shame that MIB 4 is a throwaway as bits come to life and are actually quite charming but it soon becomes apparent that this is a cynical money spinner in this dead blockbuster period of boring cookie-cutter sequels / reboots / remakes / undercooked CGI BBQs. This one gave me a belly ache. Still it's nowhere near as bad as the MIB rip-off RIPD.

Who is the "Mole"? - Men in Black: International review by BG

In general the film didn't do a lot for me. I wasn't keen on "Pawny" who looked like Humpty Dumpty with a hat on, and the the twin alien killers didn't appear to be that menacing, even though they were hard to destroy. Shame Emma Thompson only had two brief scenes, and criminal that Rebecca Ferguson was in such a short sequence, playing the bad girl again (Doctor Sleep), with three arms and a zebra-striped wig. Nice gag featuring Piers Morgan. I always thought he might be an alien!

The Black Suits are surely now in mourning - Men in Black: International review by BL

As my wife and I have thoroughly enjoyed all of the previous Men in Black films we were looking forward to the latest despite the absence of both Tommy Lee Jones and Will Smith, HOWEVER, this was dire rubbish, with wooden, poorly acted characters and feeble jokes that were hard to notice and completely failed to capture the comic style of the original films. We struggled, without comment, for an hour and then both admitted that it was to painful to watch. What a sad (hopefully) end to a great,fun series.

Didn't work for me , seemed Desperate for laughs all the way through.

Just spent the whole Movie Groaning at all the Stupid Decisions made by Both Characters . like reliving a Mr Bean type Nightmare .

Getting bit bored with watching PC games as films. Better acting and storyline would help. MIB 1 and 2 and RIPD were fine, but the stream of Marvel films and films like this just boring now..................

Give it a miss - too much feminist and pc propaganda clogging up the plot! - Men in Black: International review by CS

I thought the original first three films with Will Smith and Tommy Lee Jones were brilliant and it takes a lot to follow on from such a great trilogy! Seeing that Chris Hemsworth was in this, and his partner was now a Black Woman, I guessed instantly that his acting would be dull and that they would play up to the incessant and extremely annoying PC feminist propaganda that seems to be all so prevalent at the moment in cinema! True to form, I was not disappointed! Hemsworth literally sleepwalks through the film and acts so dumb, just like he did in the awful Ghostbusters reboot too. Tessa Thompson looks like the spitting image of Michael Jackson after he had all the facial surgery, I was so distracted by that fact, that I found it very difficult to see her as a person, that and the fact that the Black Feminist propaganda is so prevalent, that it takes over from everything else in the film! Also included are lots of not so subtle sexual put down references, like her gun is bigger than his, she's a better fighter than he is, she's just so amazing and he isn't (sarcasm intended)! The storyline, plot, acting, direction, not so special effects, are all over the place. This is a film that thinks it's funny but isn't, with constant feminist putdowns, obvious black casting, this film also feels as though it was made more for the Middle Eastern and East Asian markets, than for Europe or America and as a result treads very carefully around certain topics, whilst setting much of the film in North Africa! There are also lots of very obvious mistakes or things that don't make sense, such as the viewing platform at the top of the Eiffel Tower being the size of a concert hall, I think not! I think personally that the people making these films today have got so lost and wrapped up in PC'ness and the subject of race and gender, that they forget that what people are a race too and there are just as many men as women living here on the planet equality is just that, it's for everyone not just a select few!

Worth a watch if you enjoyed the previous ones, go in not expecting too much and leave pleasantly surprised.

Worth a watch if you enjoyed the previous ones, go in not expecting too much and leave pleasantly surprised.

I love the "Men in Black" movies, so I  thought I'd rent this despite the reviews.  Such a disappointment.  Men in Black 1-3 with Tommy Lee Jones and Will Smith were superb and compared to those, this was a damp squib - and the dialogue was painful !!  I thought Tessa Thompson was completely miscast, and as a partnership with Chris Hemsworth, it was as dull as ditch-water.  The "pc" element was thrust at us again too - a black woman super-smart compared to her "dumb" sidekick.   Liam Neeson was also miscast- he has far too soft a voice for the Chief of the Department. Not many aliens either, and those there were were poor compared to the other films.  "Pawny" seemed to have come from a completely different film for children!  It was so slow and boring without Tommy & Will wise-cracking and bouncing off each other.  Even Emma Thompson looked thoroughly fed up.  Give it a miss.

Great movie! It's not a reboot, it's just a new MIB movie. Great casting, great comedy, good story. Really gives you that nostalgic feel about the original movies. Love the little Steve alien as well, a great comedy foil for the human cast.

Could have done with a tad more action but you will definitely not be disappointed with this movie.

Similar to Ghostbusters, Sony has confused itself that the standout element to revive a franchise is to focus on the artificial rather than the personal. Men in Black: International continues this tradition by keeping its focus more on the world of aliens and futuristic tech than any of the comradery that made the 1997 original such a brilliant buddy cop picture. But you need a little more than cute aliens, nasty creatures, and a doomsday gun to make a fun adventure film.

Consider how much the film tip-toes around doing anything demeaning with Tessa Thompson. Her character starts out as an astute science-loving prodigy, clever enough to not only study up on alien existence, but also narrowly avoid the Men in Black as a kid and maintain her memories to remember an alien encounter. She’s perfect material for the Men in Black. Almost too perfect.

She’s teamed up for a London assignment with Chris Hemsworth playing a hotshot agent. Boasting his claim to fame, he once tackled an alien menace known as The Hive, earning him enough noteriety to be worthy of a painting in the hall of fame. He’s cocky, but always seems to have an easy out and is sure enough that he can either shoot or sleep his way out of any situation. He’s the perfect James Bond type for the Men in Black. Almost too perfect.

These two are just so perfect they have so little chemistry. In the film’s motivation to mark a more feminist friendly appeal, Thompson is first seen getting the hots for Hemsworth and then never again because if she did she’d be falling into an old trope of a man/woman partnership leading to love. But if they’re not an item, considering Thompson spends most of the film looking down on the dumb muscle, what’s the point of her initial window-shopping gazing in the introduction? And so the film proceeds to spend more time carefully stepping around any romance in lew of giving the two some genuine personality and chemistry.

The mission they’re sent on is such an uninspired one of a secret invasion and a mole within the agency; standard MIB situation. Haven’t we been down this road before? Located in the offices of a senior agent (Liam Neeson) is a painting depicting the events of the first film with Will Smith and Tommy Lee Jones. Just next to it is a painting of Hemsworth and Neeson stopping another alien threat in Paris. Have we not learned anything from history? At least enough to mock the familiar?

The only bit of mocking we’ll get out of the film, and personality for that matter, is from a miniature alien soldier voiced by Kumail Nanjiani. And, sadly, he too stays within his lane by mocking but never mocking too much. There’s such a distance from any and all character chemistry that the agents spend far more time talking about MacGuffins and invading aliens than anything about themselves. Why is it so hard for Sony to learn it’s not the THINGS that matter in the sci-fi adventure but the characters wielding those space-age weapons and talking to CGI creatures?

MIB: International is such a lifeless and bland picture you don’t even have to bother with the neuralyzer for trying to forget.