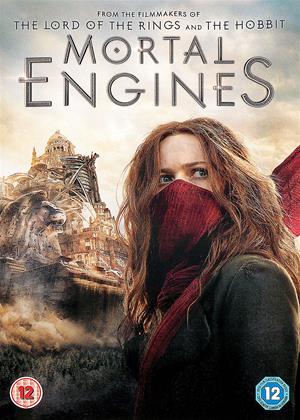 Exciting tale written by Phil Reeve, this film brings his super books to life. Best film I've seen for ages, ignore the critics - this film is certainly worth watching!

There are films that oozes in class and charisma, regardless of whether the film's tone is lightweight or dark. Lord of the Rings is a dark tale for example but its direction oozed class, humour, bombast and engaging characters. Harry Potter was part whimsical that gradually grew darker in tone through the series but always maintained that much needed wealth of charisma.

Mortal Engines has potential and certainly delivers a visually sweeping epic...but much of it's character's dynamic are directed with utter blandless. The actors are more than capable and do their best but apart from the always reliable Hugo Weaving, they can't rise above the bland direction which is a real shame.

The film also felt tremendously chopped up, not giving any room for certain important story threads to breath and gain an emotional response from me that they should otherwise deserve. Support characters being introduced but never fleshed out...a problem that most multi book series suffer from in film adaptations which is understandable but better craftsmanship would maintain better focus. Here it's just too compressed, all over the place and severely serious all the time.

I can imagine the books would have been quite a great read. I might even pick up on reading the series (so I guess this film did enough to get me interested).

There are some memorable moments, mainly the opening scene's village true nature! And a particular "Terminator" type character demanding as much screen presence as Hugo Weaving.

It's such a mess but I still recommend it if you are a Fantasy movie junkie as it certainly offers enough entertainment...just not with the same class as other notable classics.

I found it incredibly Obvious and slightly Irritating .

Who Cares who wins,you don't really know anything about Anyone enough to care for them because it is all Visual Heavy and Character Light .?

Too Much CGI for my liking.Personally I can Abide Animation,it is Flat,Cold and Dead ,I loose interest quickly with it .

If you have ever seen 'Monty Pythons Meaning Of Life' it begins with a Fake Film Short ; 'The Scarlet Permanent Assurance ' about an Investment Bank that becomes a Pirate Ship....This is Just THAT small Python sketch ,totally Ripped Off and Made into a Full Movie .

I couldn't wait for it to finish .

Not as clever or original as it seem to think it is! - Mortal Engines review by CS

Mortal Instruments: This film tries to portray itself as something totally new and original and that the author has created a totally unique fantasy world that no-one else ever thought of, in fact in the bonus features, they actually quite blatantly claim that no-one has ever seen a moving city before! If you're a Sci-Fi buff and familiar with vintage tales, you'll know that the concept of a moving city eating everything in it's path is at least as old as the 1920's. If you look at Sci-Fi from the 1920's, right through to the 1970's, you'll see this theme constantly repeated in the worlds of authors such as Jules Verne, HG Wells, HP Lovecraft and Isaac Asimov, and also in the classic artworks of artists such as Roger Dean and Dave Greenslade. Disney's 'John Carter' based upon the books by Edgar Rice Burroughs, even has a moving City also! So whilst Mortal Engines is nothing new and definitely not an original storyline, it is quite a good film to watch with some interesting imagery, but it has all been done before. It's like a modern day Cyberpunk mash up of Mad Max, Terminator, Waterworld, Star Wars and oh so many others! It reminded me so much of some of the classic Japanese Anime such as 'Howls Moving Castle', which it echoes very strongly. Hugo Weaving as usual gives a very strong performance as the baddy in all of this, but the rest of the cast really are quite limp in their parts and of course we are given the obligatory but totally unnecessary love angle to boot! So a good Sunday afternoon teen movie and I'm sure teens will probably think it's great and highly original, simply because the producers tell us it is, but an older audience will simply have seen it all done before and so much better!

Great visuals, shame about everything else - Mortal Engines review by LC

This film looks a million dollars (well, several million), and on high-definition format on a big TV it's just about worth watching for the visuals alone. Unfortunately, despite the interesting concept of mobile cities preying on each other, the characters and and storyline here are nothing but obvious genre cliché and the dialogue is frequently ripe with cheese. Would recommend for children, who are too young or innocent to spot the clichés piling up (and apparently this is based on a Young Adult novel, so maybe a 'kids' film' is all it was ever intended to be) - anyone else, and you're just going to have to try to switch your brain off and enjoy the pretty pictures.

I'm too old (61) to be watching this kind of film with an open mind. Seemed dated and childish and poorly acted and plotted.

Shame. I was liking forward to it.

I loved the universe and the visuals. The film was also big on sound. So for me it was well worth watching.

But the story was tedious and by the numbers. Straight out the 5 steps to writing your first story guide.

It was one of those films where i really wanted team bad to win. They didnt actually seem that bad and the bad back story sounded like some guardian propaganda.

None of the characters were remotely interesting or likeable.

So poor film, but probably worth a watch if you are running a cinema style setup.

Actually is quite good. Totally ridiculous, but, like Waterworld and Mad Max, does keep a pace up. Wild Wild West machine rings a bell here and there.

Well, this films certainly looks fantastic and there are some really exciting well made sequences particularly early on but it definitely runs out of steam (punk) in the second half when it basically rips off bringing down the Death Star and becomes boringly predictable and just a bit silly (or sillier). There's probably a much fuller story to be told (I've not read the books) but this feels like too much is skimmed over to have any emotional attachment to or interest in the characters as you don't really get to know them. I like Hugo Weaving as an actor and he has provided some great performances in other sci-fi/fantasy films but he just not convincing in this and maybe was helping his friend Peter Jackson out. Overall, then, yes it was fairly enjoyable but I'd wait for it to turn up on TV.

London, a predator city on wheels. Who would have thought it! Utterly fantastical, extravagant CGI, fastmoving action filled plot. Not for the purists maybe but for the rest of us, good entertainment.

Decades ago, Peter Jackson’s WingNut production company made a cheap and clever film called Bad Taste, made for little money and shot on weekends, but oozing with as much charm as it was gross brains spilling out of heads. Now, in 2018, his company has made Mortal Engines, a big-budget blockbuster based on the young adult novel that is devoid of personality. A budget of $100 million can’t make up for the lacking personality, as the film comes off as little more than another clunker of the subgenre.

More thought has been put into this amazing post-apocalyptic world with its towering cities and alternative aircraft. It really says something about an adventure film such as this where the mobile version of London, its many buildings and landmarks sitting atop a giant tank, has more personality than any of its characters. The hero is Hester, a young girl that has revenge on her mind but must ultimately save the day and come to terms with her sordid past. The villain is the evil London historian Thaddeus, dabbling in pre-apocalypse weapons to maybe rule over London one day. Tom is a plainly plucky young historian that will end up in a romance with Hester because the plot requires one, pushing them together like a kid making their dolls kiss each other forcibly.

Other characters are thrown into the mix. Anna Fang is a rebel working against the tank cities who looks like she belongs more in a post-apocalyptic 1980s than the dirtier and grimy world of tanks. No, wait, she has more the look of a Final Fantasy character with her huge hair, bright red jacket, designer sunglasses, and shotgun. She looks so strange amid the rebels and city-dwellers that all look either filthy or old-fashioned proper. Another character thrown into the mix is the zombie-cyborg Shrike (Stephen Lang) who hunts down Hester like a green-eyed Terminator, a bone still left to pick with her. He has a backstory that may be the most interesting of the lot but he’s reduced to a mere supporting character.

You don’t even have to wait for the credits to know this movie was based on a young adult novel. You can feel how overstuffed this picture is with characters, machines, colonies, backstories, and tropes that it’s struggling to get too much of the source material crammed into a tight two hours. This leads to several deeply confusing scenes about how Tom is such a great amateur pilot and how Hester just happens to have a third act MacGuffin that she was aloof to for years, including her mother who may or may not have seen these events coming. The film also doesn’t have time to introduce other supporting characters who receive little more than brief shots and you’re just expected to know and care about them so that it’s tragic if a few of them die.

I almost feel guilty giving Mortal Engines a mild pass for its visuals that are certainly big and detailed on the IMAX screen because everything else about the picture is a real snooze. By the second act, it becomes very clear this story is on a rigid track and won’t surprise in the least with any unique twists or changes in characters. Perhaps the book would’ve made a better video game considering how much I adored the architecture over the people living inside the cities that can eat towns.