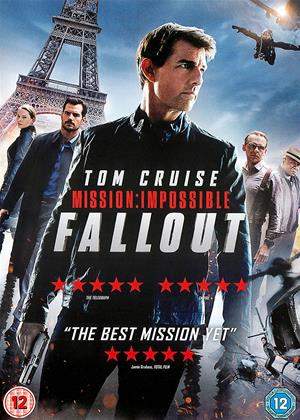 Right from the beginning this film has strong religious overtones and I found it odd that the bad guy in this is a non religious person who wants world peace! The film seems to suggest that people who are not religious or see the hate that religion seems to spread nowadays, are in fact bad people for wanting peace and harmony, something which I thought was quite a dangerous and questionable message to send out, particularly given Cruises own questionable religious beliefs! Whilst the film does have lots of action and is constantly driving forward, it offers little new, simply treading familiar ground and I personally found it extremely predictable and quite tedious as a result! I was literally saying to myself this is going to happen, that's going to happen next and surely as eggs are eggs, it did happen! The plot has been done hundreds of times before in various films, most of the actors seemed to be sleeping through their parts as though they too knew it was the same old. However as I've already said, what really ruined this for me was the sad suggestion that wanting world peace and not believing in religion was a bad thing and for this alone I would throw this film in the bin!

This films tension and excitement is ruined by the needless changes in aspect ratio. When will the studios catch on that we know the real reason for the shift in ratios. They just can't be bothered to pay the money to mask the imax scenes to match the rest of the movie. I love the mission impossible films but this is the first one I won't be buying

Another exhilarating instalment in the MI franchise. The characters are likeable, the plot is mind-bendingly complex, the screeds of exposition that interleave set-pieces are hysterical and Christopher McQuarrie directs all this with absolute command. But it’s those set-pieces that define MI and Fallout certainly delivers, with Tom Cruise doing incredible stunts the old-fashioned way without cgi. Among other highlights there are great chases around Paris and a terrific climax in the mountains of New Zealand (standing in for Kashmir). MI fans will not be disappointed.

This franchise shows no sign of flagging!  Action sequence into action sequence, as always.  Is it me, or is Tom Cruise making Ethan Hunt even more sympathetic?  Could just be advancing years ( for both of us!),  Great fun. Keep 'em coming.

Got swept along with the press reviews and made the mistake of hiring this movie. Run of the mill and boring unless you want non sensical wall to wall car chases, shootings and mundane dialogue. Ridiculous

The other reviews sound like they watched a poor documentary! This is Hollywood entertainment and escapism. I watch a lot of films and this was one the best I’ve seen in some time, well done Tom and JJ Abrams. More please...

Easily the best in the franchise - Mission: Impossible: Fallout review by IR

I enjoyed this a lot. Plenty to keep you thinking, silliness kept to a minimum and only right at the end, and a pervasive sense of jeopardy which isn't always present in the others.

Some great performances and good humour round it all out.

Good film for a sunday afternoon , you will be able to go make a cuppa and still know what's going on lolol

The film as can be expected, has a fairly silly and implausible plot line, but, remember that it is a 12 certificate so accept it for what it is. A great fun action movie with some great cgi special effects and superhuman ability to overcome deadly injury including totally destructive helicopter crashes. All in all great, ludicrous escapism

to be expected - Mission: Impossible: Fallout review by OP

This is a fast action watchable film, made to the same formulaic structure, and containing the ridiculous feats, that we expect from the Mission Impossible franchise. To that extent its highly entertaining (and really a load of tosh)

A bit too samey for my liking, yes it's a different story to previous films but just a little predictable and not really bringing anything new to the franchise.

Some great action sequences, car chases, shooting and Tom Cruise doing some excellent running and it looks lovely even if there is a bit too much CGI at times.

I personally find Simon Pegg a bit annoying but that could just be me.

Overall enjoyable nonsense but a little too long. Glad I rented and didn't buy.

Now in its sixth chapter, the Mission Impossible franchise has proven that it still not only has Tom Cruise’s drive for insane stunts but also real grit to go the extra mile. With a series involving spy disguises, fast-paced action, and double-crosses that go so deep they may reach double digits, director Christopher McQuarrie has ensured we won’t get bored or grow tired with the spectacle. If these movies are indeed a showcase of a Tom Cruise action vehicle, McQuarrie has tuned up the engine, filled up the tank, and mounted nitro boosters to make the best damn Mission Impossible yet.

Whereas the last Mission Impossible movie had Cruise shoving nearly all his co-stars into the background as he dived into the water and hung onto planes, Fallout finds a better balance. No longer the one man holding his own in death-defying stunts, Henry Cavill enters the picture as the perfect rival for Cruise’s Ethan Hunt. Cavill plays CIA agent August Walker who doesn’t entirely trust Ethan or agrees with his methods. Walker would rather punch a suspect to a bloody pulp them drug them up and assume their identity. And while this causes Ethan’s plans to go awry, I have to admit it’s a hoot to watch Walker mess stuff up (figuratively and literally) and Ethan formulates new plans on the fly. Unless he already has a plan for when those plans go wrong?

McQuarrie’s direction always keeps us guessing who the true backstabber is in this fast-paced spy thriller that never stops, as though its brakes for tired exposition had been cut. The story moves so quickly between the snarky smarts of partners Benji (Simon Pegg) and Luther (Ving Rhames), the questionable allegiance of former MI:6 agent Ilsa (Rebecca Ferguson), and the shady behind the scenes work of agency directors Alan Hunley (Alec Baldwin) and Erica Sloane (Angela Bassett). It moves so briskly that we don’t have time to become too bogged down in a tale of stopping nukes from going off, complete with wires to be cut at just the right second and a button to be pushed as the countdown timer goes from green to red. Even the usual bad-guy banter of returning villain Solomon Kane (Sean Harris) is kept to a minimum with all the exciting chases, on in foot, in cars, and dangling from helicopters.

It’s hard to gush about how finely crafted the action scenes are without dissecting them like spelling out the recipe of a tasty dish. Let’s just say McQuarrie and Cruise took a step back when looking at these scenes and decided to go one step further. A tight car chase through oncoming traffic is exciting, but what if Ethan took a major tumble or had to deal with a lone police officer on his mad dash from authorities? A duel of helicopters around mountains is intense, but what if it was more intense by having them both crash down the mountainside in a destructive tumble that seemingly never ends? Every sequence is a real treat and elongated enough to appreciate the true craft of the action at play.

Another strong aspect of Fallout, for being a direct sequel, is a heavier focus on Ethan as a character. If the last film had him leaving everyone in the dust, Fallout slows him down just enough to show off Hunt’s capacity for never leaving a man behind or sacrificing someone’s life for the greater good. It’s an inspiring nature for an agent typically involved in acts of great lies and working with the enemy, bringing him to nearly gun down innocent law enforcement in his quest to uncover plutonium. We also get more of a peek into Ethan’s mindset of keeping the women distant in his dangerous line of work, fearing he’ll lose everything, as Solomon seems to mutter continuously in his mission to cause chaos.

Despite a running time of 140 minutes, Fallout is by far the most exhilarating of the Mission Impossible franchise, which is saying something for being the sixth film in the saga. Few films make it this far and prove they still have spry and clever ideas to make a blockbuster action film as wise as it is big. While Ghost Protocol remains my favorite entry of Mission Impossible, Fallout is so close that maybe one or two more viewings would convince me this is the best of the series.