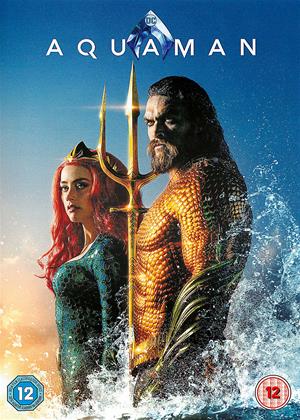 Absolutely awful wish mash, all over the place! - Aquaman review by CS

Right from the start, this film is a mish mash of concepts and ideas. It tries to be very clever, deep and meaningfull, yet simply doesn't have the depth of script or storyline to carry it off! The story is really basic and has been done so many times before, in fact it really is just another marvel movie, only this time set underwater. The script is dire, whilst the Atlanteans try to come off as very intelligent by using posh voices and words, Aquaman just comes across as a common thing with very limited vocabulary and typical hard man one off lines. The direction is sloppy and the editing, filmography and scenes are all over the place. The CGI on the underwater scenes is really messy and very poorly done, what should be beautifully haunting underwater seascapes, because cheap cut n paste blobs of cpoulour as the movement is so fast paced that you never actually get to see anything. Overtime they went underwater I was constantly reminded of Star Wars and Valerian, most of the costumes and machines looked like they had been pinched from Star wars and given a fish overhaul whilst the lavish scenery has been done so much better in other sic-fantasy films such as Valerian or even John Carter! At over two hours long, the film really started to drag as well, because it simply does not have the quality of script or action or drama to draw you in. Highly predictable, badly made and totally unoriginal, I found this quite a boring film to watch. And why Aquaman kept speaking Maori is beyond comprehension!

Trite and confused plot, paper thin characters, haphazard direction, cliched writing. If you are able to quote the characters while they are speaking, it's lazy writing.

Almost every single scene was a call back to a previous, better film. I spent the whole time spotting the better scenes, wishing to watch those instead.

This film tried to do too much with too little, resulting in an unremarkable mess. I walked out of the theatre.

I enjoyed this all the way through. Amazing colours and special effects. The stories were interesting. I was going to give it a miss due to bad reviews, but I decided to rent it and I am so pleased I did. Give it a go, you just might love it.

I wasn't expecting much from DC's attempt to cash in on the MCU bandwagon, but this was a wide miss by even that measure. A thread bare plot plastered with colourful CGI is not the way to go. Listening to the explanation of why there's a bridge into Atlantis captures the intelligent story telling vacuum peddled to the audience. MCU has done stories of this nature before and they did it better (even the latest efforts have), in this age where people are getting jaded of super hero films this stunk like last weeks fish. In one way they did achieve MCU equivalence. The one liners reminded me of GotG2, lacking in wit and humour. DC, stick to Batman.

Simply awful, terrible acting and it was like watching a cartoon they'd gone so CGI mad. I turned it off after 20 mins and then stupidly came back to it the next day expecting it to get better, it didn't. I'll watch anything as well.

Makes No sense, Utter Rubbish, I would say spoiler, but nothing can spoil this any more! - Aquaman review by BK

This film feels like someone different was bought in every 10 minutes and was told nothing about the rest of the film. One cannot readily establish any rapport or empathy with any of the 1 dimensional characters. I have no idea how Willem Dafoe was suckered into doing this, but he is good enough to have kept some credibility. I watched it to the end to see if by some remote chance it would redeem itself. Predictably not. I have no idea who this is meant to appeal to, only to say, that the money spent on the very poor CGI would have been better spent on a decent screen writer.

A water-based superhero? It’s all too silly for words and plot and dialogue soon descend into childish nonsense. Atlantis is seriously under-realised. It’s just full of floating people. Do they eat fish? Do they have plumbing? The climactic undersea battle is one big cgi bore.

Despite this, there’s a surprising amount to admire here. The film contains more visual flair than most comic book films, with some scenes having a psychedelic quality. Add to this some stylish camera movements and scene transitions that are unusually imaginative. At its best it’s like watching a high-class travelogue.

Even the score isn’t complete orchestral muzak. It even has room for a snatch of Depeche Mode. In fact the whole film would have worked better as a music video. Best of all is a beautifully choreographed and visually stunning chase/fight on the rooftops of a cliff-top Italian village. Worth watching? Yes, if only to catch the high spots among the dross.

Many stories wrapped into one - Aquaman review by SM

Very colorful film, but as many others say the plot was all over. Elements from many different adventure/fantasy films. Obvious Sword in the Stone reference toward the end. Nice beefy sound track on home cinema set up, but the bloated storyline let's it down.

All the actors in it are way more talented than the material they have to work with and frankly deserve better.

Enjoyable to watch in a 'stupid movie night' way, but I cannot in good conscience recommend this to anyone who isn't already a die-hard Momoa or Aquaman fan.

I gave up half an hour into the film. The dialogue , story and characterisation are awful. A waste of time unless you are a die hard super hero film watcher!

There’s a brilliant moment in Geoff Johns’ New 52 run on Aquaman where the hero walks into a seafood restaurant. The human customers are shocked, with one asking why Aquaman would eat fish considering they’re his friends. A misconception, he explains. He talks to fish but fish are just too stupid to have meaningful conversations, a great point made by Dave Chappelle’s stand-up. Thankfully, James Wan’s Aquaman doesn’t go for these obvious jokes and answers to nobody for its earnest attempt to weave a hero fantasy of undersea kingdoms and ridiculous outfits.

Jason Mamoa returns to the role of Arthur Curry with the same charisma and muscles he boasted in last year’s Justice League. Don’t worry; you don’t need to catch up on that lukewarm superhero flick to be brought up to speed. The film maintains its central focus squarely on Arthur, from his half-human birth with his mother (Nicole Kidman) being an Atlantian princess. Angered by the departure of his mother and her mysterious disappearance in Atlantis, Arthur isn’t particularly keen to go back home, despite the pleas of the water-manipulating warrior Mera (Amber Heard). But when he realizes war is coming to the surface world, he’s gotta put a raincheck on the bar brawls and tangles with submarine pirates to sort the underwater kingdoms.

It helps that there’s an easier route to finally rule over the oceans. King Orm (Patrick Wilson) is Arthur’s Atlantian pure-blood brother and has chosen the political route. If he can convince the other kingdoms to put aside their differences and join him for an alliance on an attack against the humans, he can become the Ocean Master and rule with a silly piece of battle armor. Arthur can skip all this, however, by going treasure hunting. Sounds more fun for the bearded and buff warrior who would rather hash out differences in an arena of lava or tangle with frightening sea creatures.

The best and worst that can be said is that Wan wants to do so much and never fully settles on one tone. The underwater kingdom of Atlantis is a neon metropolis with a kaleidoscopic 1980s edge, complete with a synth soundtrack. That soundtrack shifts to a bouncy orchestra, however, when Arthur and Mera find themselves treasure hunting. Then manly rock when Arthur takes on a submarine of pirates. Then an epic score for a Lord of the Rings battle under the sea. Then horror for the attack of the piranha people. Oh, and you’ve gotta hit the somber notes for Arthur’s pathos, as well as the pathos of his secondary nemesis of Black Manta (Yahya Abdul-Mateen II).

Though it’s very much all over the place in tone, I must admit the various flavors were all appetizing. I dug the Atlantian politics, especially when they involve Willem Dafoe as a conflicted counselor and Dolph Lundgren as a general, riding into battle on giant seahorses. Nicole Kidman gets in one of the scenes most fantastic one-take action sequences and Amber Heard makes great use of her abilities that allow water to be sucked out bodies. I hoped that the film would remember this ability from the comics and James Wan puts it to great use.

Wan does right by Aquaman, treating the character with dignity and keeping that silly tongue firmly in cheek. That commitment to the fantasy makes it all the more pleasing to be engaged with underwater politics, horrific fights with sea monsters, big action of underwater craft, etc. This desire to make a firmly adventurous picture props up the hero to such a degree I doubt anyone would speak lowly of the classic orange and green. You could call him goofy but I definitely wouldn’t mess with Jason Mamoa. And when it comes to a film that all leads up to a war of Atlantians versus crab people, you’ve gotta shoot forth boldly. Wan does so with gusto, making the unfamiliar finally admit that Aquaman is cool.