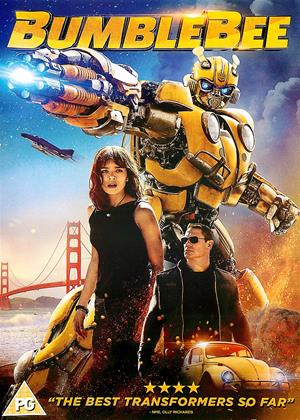 How not to make a film - BumbleBee review by JM

Went out to see this one at the cinema. Walked out less than half way through. I usually enjoy the Transformer films and thought the past couple with Mark Wahlburg were great. This film is a complete stain on the series. Poor story. Poor background. Poor character development. Poor humour. No emotional attachment created with any of the characters. Bumble bee is just plain silly. The lead actress leaves you questioning why she was cast at all. John Cena's part may as well have been played by a crash dummy.

Sounds harsh but lacking in every department. The only positive I could possibly give is the choice of songs used but they completely littered those parts of the film I stayed to watch with these songs in attempt to distract the viewer away from everything else. If I want great music...I'd put my music collection on at home.

There are few films I've walked out on at the cinema in the past. In closing, don't waste your time; this film is frankly insulting to the viewer.

3 out of 10 members found this review helpful.

Much better than the Transformer films - BumbleBee review by PC

At last a Transformer film that is not merely throwing as much noise and special effects at the screen until you are bludgeoned into submission. A good cast, funny lines and characters that make sense, fans of the first films may be disappointed at an actual story but film fans should give it a go.

Resets the bar for Transformers films - BumbleBee review by Alphaville

Who’d have thought? A Transformers film with heart! English screenwriter Christina Hodson has written a heart-warming script far from the usual fanboy agenda and director Travis Knight embraces it with panache. In this prequel set in 1987, teenager Hailee Steinfield grieves for her dead father while forming a bond with injured Transformer Bumblebee.

It’s very silly, of course, but by focussing on their relationship it works like a more adult version of ET, with a killer score of 1980s pop classics and some great San Francisco North Bay scenery adding to the mix. It descends into the usual underwhelming cgi cartoon battle at the climax, but up to that point the journey is more involving than it has any right to be.

This is a series that I had come to loathe over the past decade. Many reviewers have explained in great detail why the Michael Bay offerings leave a lot to be desired, so I would have nothing to add on that front.

But by gum , they have finally given us a taste of what many audience members have always wanted from a Transformers film. Not to damn it with faint praise. The first 5 minutes is largely for those 80’s nostalgia addicts, and gets us off to a neat plot setup. However, the real heart and story here is the central emotional narrative of a girl named Charlie, and her gone but not forgotten father.

It’s a formulae that’s been used many times before, but the performances and it’s sweet innocence carry you through with a smile on your face. The supporting cast is great, albeit sometimes underused (Pamela Adlon), but this is a solid family film with simple joys and good pointer towards what could be a much improved Transformers franchise. Gladly Travis Knight’s direction offers a refreshing take on this series, with real heart. Pleasantly surprising!

So i'm a huge Transformers fan, esp the initial ones and was excited to see the Bumblebee spin off. After watching i was left with mixed feelings but overall they were positive. Summary below.

Pros - The relationship between Bee and Charlie is fun, intense and emotional. It's an epic piece of acting by Hailee Steinfeld and is arguably the movies strongest point.

Cons - It's very much lacking in real umph which for a child friendly spin off is to be expected but leaves the older fans wanting more. Also, it's the Bumblebee story but there's no real history about who he is. There's 5 minutes at the start which gives you a brief glimps into his life but that's it. The rest of the movie is (no spoilers) about his "earth" based life. There's no back story, no history. Why is Bee who he is which is disappointing. Also, John Cena is a massive CON for this movie. Horrific acting ability! The man should not be allowed on a film set!

Would love to give this movie 4 stars but it's a solid 3 and worth a watch.

This Bumblebee stung me - but not in a good way. - BumbleBee review by DS

I had heard good things about Bumblebee with more than a few critics and viewers saying this was a film that gets the Transformers franchise back on track with something resembling characters and a decent story.

Well for start Michael Bay is not directing it and Hailee Steinfeld is the main actor so that has to be an improvement on paper before the film is even watched?

Unfortunately for me the film was basic Transformers-fare. When we had quieter moments with Hailee Steinfeld featuring we had a teen-angst plot that felt shoe-horned in and fairly generic and when we had John Cena and Transformers we had explody-shouty-headachey action where I could not figure out who was fighting, winning or even why to some extent. Cena seemed like he was written into the story after the final script had been signed off and other than 'hey it's John Cena' I saw no purpose for him being in the story. He's big and he shouts a lot - I thought the eighties were thirty years ago?

The film is set in the 80s so there is a big Stranger Things bookmark tagged on there and I got a distinct ET vibe with the 'mysterious alien amongst us that only I know about' part of the story. In all honesty despite the crashing, exploding and transforming I found great passages of the film boring. Alongside the cinematography being dark and murky meaning I was confused. I was confused by the giant robots often forgetting which was which but it is at this point that I fully realise that Bumblebee was not for me, not intended for me and never will be.

Another strange point for me was the overall tone of the film, it starts of robots lambasting each other, then battling on Earth, one lot is good, the other lot are bad, okay all fairly simple and appealing to kids, then at least two characters are turned into liquid goop, the die presumably a horrible death but on we go, it's okay. Nah, I'm no prude or ultra-conservative but something did not sit right with me when this happened. Perhaps it was my overall mood whilst watching that coloured this opinion? Maybe so.

Overall it is competently made film with what I expect is the requisite amount of action and humour to keep youngsters and nostalgists going but as for adding something new to the franchise, I have to say not really.

Too young to watch afternoon Doctors and too old to watch Transformers films, exploding, round-housing robots do not a happy old fella make.

We can’t judge BumbleBee in the same vein as Michael Bay’s previous Transformers movies, despite being a prequel spin-off. Sure, it shares the same timeline and characters but outside of that, it’s a completely different film. To say it’s better than Bay-formers is an easy victory. Now the film must compete in the new realm of films where teenage kids make friends with an alien from space. And in this genre, the film turns up rather lukewarm.

But, yes, let’s give thanks to director Travis Knight for not making his film as muddy, convoluted, cynical, and aggressive with product placement. He has stripped away all of this needless junk to make way for a simpler story with simpler robot designs that look more like the G1 cartoon and less like mechanical vomit in motion. He has trimmed the cast, relegating the Autobots to one and Decepticons to two when it comes to the main story. He makes the human characters more relatable and less hatable, despite still being a bit cartoonish. In terms of the construction, yes, it’s a better film.

Now, setting all that retooling aside, let’s talk about its finer points. We learn that the heroic Autobot of BumbleBee crash-landed on Earth in 1987 with no memory and no voice, making it difficult to prepare for the coming of the evil Decepticons. He finds a human friend in the teenage automotive prodigy Charlie, played with charming pluck and frustration by Hailee Steinfeld. She’s not popular at school and her family ignores her so she naturally gravitates towards the scared and accidental BumbleBee. Though BumbleBee has lost his memory, he apparently remembers that Autobots are very specific about their 1980s music; they love Stan Bush and hate Rick Astley.

The central conflict of the story is not that interesting and unfortunately falls back into the same bad habits of the saga, despite being relatively trimmed. Visiting Decepticons of Shatter (Angela Bassett) and Dropkick (Justin Theroux) have convinced the American military that they’re the good guys hunting down the evil BumbleBee and gain access to their tech. Their mission is simple: kill BumbleBee and take over Earth, zapping humans along the way. Standard bad robot protocol but with fewer subplots. But it’s going to take more than simplification to be won over by this adventure, especially if it wants us to care a lot about BumbleBee possibly biting the dust.

I gotta give the film points for trying. It wants to be sweet and gentle with the relationship of Charlie and BumbleBee but it feels so underdeveloped the whole cuteness comes off as mechanical, sweeter by design than genuine chemistry. I suppose I should be feeling something when BumbleBee tussles Charlie’s hair or Charlie teaches the robot the fine art of not being seen. But there seem to be a few scenes missing to make that emotion real, where the caress of metal carries a heart with it. It doesn’t help that the supporting players fall into the familiar Bay stereotypes as well, John Cena acting like the meat-headed soldier and Jorge Lendeborg Jr. as the meek nerd who’d really like to ask Charlie out on a date.

Don’t get me wrong; I’m thankful director Travis Knight has steered away from most of the messy Michael Bay model of filmmaking and has constructed something more concrete for a film. Now he just needs to refine this stripped-down model of the Transformers so that the gentle and silly nature for kids carries more effort and not come off like a watered-down Iron Giant.