Rent Valerian and the City of a Thousand Planets (2017) 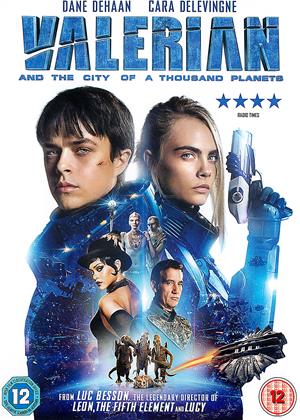 Reviews (24) of Valerian and the City of a Thousand Planets

I was really looking forward to watching this, having loved the Fifth Element and other Besson films. However i was just bored, the plot seemed to go off all over the place. I never usually pick up on editing, but the edting was aweful. Space bits and CGI were fine, just the plot and acting were terrible, no wonder if flopped at the box office. Real shame. Lead character was dreadful as well, Cara was better.

Casting for Valerian was totally wrong. Once that terrible decision was made, it was impossible to save the movie.

The storyline was ok (thanks to the original great comic material which pre-existed Star Wars and inspired Lucas), the dialogues were laughingly bad. I suggest employing proper writers rather than relying on Besson's "wit".

Main actor, on top of being wrongly cast and having poor lines was terrible. Even Cara Delevingne was better.

Some visuals were ok, not groundbreaking (mostly cut and paste from many other movies).

How can such an uninspired director who hasn't made a decent movie in a long long time access this kind of budget is mind boggling.

Valerian fails as a movie but succeeds as a promotional tool for Besson's CGI studio. But do you want to pay to watch a 2-hour ad?

I wonder sometimes if I watched the same film as all these negative review writers.

I came to this film with no expectations other than I had seen a trailer displayed on an Oled TV in John Lewis and it looked interesting. but I am glad I added it to my list because both my husband and I thoroughly enjoyed it.

The story is decent enough though the plot is rather predictable, the world they have created and the graphics were astonishing, the sound was fairly consistent unlike so many other action films that have you jumping for the remote so you can hear what's being said or trying to turn the sound down so you do not blast your neighbours and, despite it being on DVD, the picture was crystal clear on our 55 inch screen.

I just hope that now they know their idea and new actor formulae works they get a less predictable scriptwriter and create a follow-up using the same CGI crew and director as that would be really something.

Probably the best Sci-Fi Movie this year! - Valerian and the City of a Thousand Planets review by CS

Having read other reviews and heard that this was a box office flop, I was intrigued, Luc Besson has produced some fantastic films and of course brought us the brilliantly original 'Fifth Element'. This film literally takes inspiration and pays strong homage to past films of its genre such as The Fifth Element, Avatar and Star Wars, but brings us something new and so off the hook that it takes a while to take it all in! Yes there are strong similarities to other films, the beginning is a strong homage to Avatar, then a tip of the hat to The Fifth Element, then a really wacky 3D Virtual Reality element, then Star Wars and so on, but these homages are done in such an interesting and creative way, they they work beautifully. The CGI is amazing and I can imagine this would be mind blowing in 3D, especially the Virtual Reality sequence where we are taken into another dimension! I can see some people finding this concept a little difficult to understand, but somehow Besson pulls it off in style. The plot is not particularly new or original, but Besson simply has a knack at bringing together some really whacky and unique sequences. Lots of cameos from past big stars, but rather than using some big name in the title roles, he has opted quite rightly to use two relatively unknowns who are able to use their acting skills to bring something fresh to the film. I actually found this very enjoyable to watch, it kept a good pace and kept my interest, in fact I had to watch it twice as there is so much going on that you miss a lot the first time round! This isn't a film that needs big names or lots of hope to sell, unlike most of the appallingly dire Sci-Fi movies of late like the recent star Wars movies which have been dull to say the least, this film really stands on its own. Perhaps the reason why this has been slated by some is because it's not really film for wham bam thank you man viewers, it's much more stylish and sophisticated than that. Granted some of the editing may appear a bit haphazard, like the cutting between the different dimensions, but its meant to be like that because you are moving between different sequences and time frames, a bit like a dream sequence, which can be a very difficult concept to get across in film, but personally i think its a real triumph of cinema and definitely for me the best sci-fi movie of the year!

The Valerian and Laureline graphic novels were cool, imaginative and very French. It was said, with some justification, that the first Star Wars locations were based on them. Especially the Catina scene.

This film had a great five minutes at the start. To the background of Bowie's Major Tom the ISS expands from a space station to an orbital city. Each expansion illustrated by the shaking of hands, grapples and tentacles of new visiting species at the same airlock. So well done!

After that is its downhill all the way. The look was not the same as the books. Laureline was a slightly older redhead, not a blonde. Valerian was older and more mature than the schoolboy playing him. They were partners in the novels like Steed and Emma Peel. Not dopey teenagers.

The CGI detracted from the film because the great quality work highlighted the poor charectisations.

I do not like the Star Wars films but I enjoyed this film. It has echoes of Avatar at beginning and end. It was different and unexpectedly enjoyable. Happy ending which is always good.

The casting was ok apart from the male lead mumbling and I thought Cara had to carry the film. No sensible plot

for an hour. I was just about to give up on then it somehow re-engaged me and some

consistency to it. Very Fifth Elementy in places but nowhere near as engaging.

Lots to like including the originality of it. - Valerian and the City of a Thousand Planets review by IB

Yes lots of CGI but a very entertaining movie with a story line that could be replayed as we bulldoze the Amazon forests...

Amazing visuals, lacklustre story - Valerian and the City of a Thousand Planets review by CJ

This film has a quite amazing intro showing a peaceful alien planet and the inhabitants way of life. However as the film progressed it became very much a run of the mill affair concentrating on the two main characters weak, love relationship. Although the leads lead characters were okay, its's a great shame that rather than focusing on human characters it could have focused more on an alien story and an adventure of the like we have never ever seen (but not like Avatar please...).

So overall, this film is a bit of a disappointment because we've seen virtually all the elements here in other films. Many sci-fi console games tell a better story. Yes the visual style is stunningly bright and colourful but was lacking something emotionally engaging. It could have been much cooler and sexier. Come on, the Japanese were creating better animated stories in the 1980s than this! Why not give us 'Dirty Pair', of which this film reminded me for an instant, or 'Bubblegum Crisis'.

That said, Besson is one of the few directors that can capture alien and sci-fi imagery in a way that reminds me of the early 1980s 2000ad weekly comics I loved as a child. If only someone could make some film versions of the 2000ad stories besides Judge Dredd (or just some of the better Dredd stories). I would love to see an authentic ABC Warriors/ ro-busters movie (though not if they do a transformers style reboot).

Cannot believe the same mind that brought us Leon: the Professional, has come up with this. Maybe it's the source material that's at fault, but even way - amazing visuals could not keep me from checking the phone most of the way through this. There are worse sci-fi films, and ok there are a few moments I looked up, but the story ... WTF ?