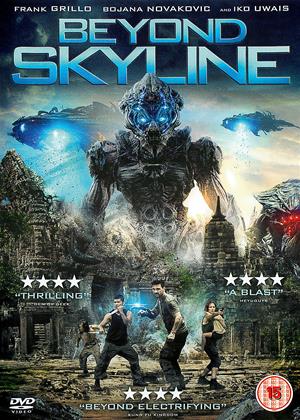 Reviews (2) of Beyond Skyline

Finally the ending the first film never gaveus.... - Beyond Skyline review by porky

Entertaining romp, not the best sci-fi movie ive seen this year but it is very welcome just to finally get a proper Ending that the first Skyline never gave us, this movie takes place in the same timescale as the first and the final characters show up halfway into this one. so where we left them in the first movie gets its end.

I did feel slightly robbed that the whole second half was told in a completely different continent .but unlike the first Skyline ,this one is a Complete Story. with a beginning,an explanation and an end.

Sadly the lack luster CGI lets this one down hugely ,obviously made on a smaller CGI budget . not All but Some of the action isnt well created. there are one or two sections where you can see the money ran out before everything was properly matted ,but on the whole an enjoyable movie. well worth more than the one watch in my opinion.

The original Skyline was a terrific underrated alien invasion extravaganza of 2010 directed by a couple of cgi wizards. Critics unaccountably preferred this ragbag sequel. With a different director, it continues the fight against the aliens on the Underground, in their spaceship and in the Indonesian jungle of all places. There’s little in the way of plot to connect the three, especially the jungle setting, which introduces a late irrelevant subplot and seems to belong to a different film. The characters are so sketchily drawn that we never really care what happens to them anyway.

What remains of interest are the special effects, and it has to be said there’s some imaginative visual imagery on display here. At times the screen is a kaleidoscope of colour and movement. This can’t be called a successful film, but there’s certainly enough here to keep hard sci-fi fans engaged.

Sans a bigger budget and notable names, Skyline can now slip into the goofy shlock it was destined to be. The 2010 film was a muddied mix of an alien invasion and a survival drama, ultimately ending with a violent climax better suited as a toy commercial. The good news is that Beyond Skyline embraces more of the cheapness of its lackluster effects and laughably random narrative. And while it certainly is more enjoyable than its crash-and-burn failure of a predecessor, the sequel still fails to fully realize how dumb its premise is of blue death beams, armored aliens, and brain-sucking creatures.

There was a part of me that looked forward to Beyond Skyline if it was willing to embrace its insanity. It could have taken the Cloverfield route and we’ve a much different story around the alien invasion. But, no, it’s back to the same old story that reveals too much and too little of the enemy from outer space. A new batch of characters are thrown into the exact same events of the previous film, acting more or less as a sidestory. Frank Grillo plays Mark Corley, a Los Angeles detective, struggling to keep his troublesome son Trent (Jonny Weston) out of jail. Their relationship is strained, but perhaps an alien invasion will bring them closer together. There’s nothing quite like bringing a father and son together when mechanized monsters are abducting the entire population and harvesting organs.

After we get the tired retellings out of the way, the movie thankfully doesn’t toss our central cast into a box and force them to play another bout of hide and seek. This film finds them sucked up into the spaceship early and fighting their way out through there. Remember how the previous film had that one harvested brain that wouldn’t become an alien slave and tried to save his girlfriend? He has returned, or at least the silly armored alien body he now occupies. His defection has something to do with exposure to blue lasers and reflections of human life. It’s a messy explanation for weaving good aliens into the plot of bad aliens. And if you think that’s confounding, wait until a rapidly growing human baby born of the same counter energy is thrown into the mix.

Where the film shines brighter is when it takes in a change of location for Laos. The story shifts focus towards a collective of Laos freedom fighters that are still dealing with corrupt military officials in between being assaulted by alien forces. Though the cheapness remains, there’s bigger bite to this section where Laos warrior Sua (Iko Uwais) informs our American cast that they’re used to battling for their lives and that intergalactic invaders are no different. A little political? A tad, but any commentary is quickly swept away by martial arts and giant alien robots duking it out for the fate of the world.

Beyond Skyline at least has the decency to embrace its goofiness, but still carries with it the undeniability of being awkwardly cheap. Everything from the giant spaceships to the practical effects of piercing wounds carries a distracting and slapped-together nature. The best that can be said is that the alien armor has a decently unique design for practical costumes and that we are briefly treated to some martial arts. That’s more than I can say for the film’s predecessor that staged hokey survival before delivering a two-minute commercial for the toys. Oh, there are more toys to sell in this film, but there’s at least enough dopey shlock going on to be entertained if not by the spectacle than for the sheer audacity to go this dumb with the material. That being said, the ending is less ridiculous, closing on the most tired of cliffhanger lines: “We’re taking the fight to them.” Someday, somebody will finally make that movie where we take the fight to them. Someday, Skyline: Human Invasion.