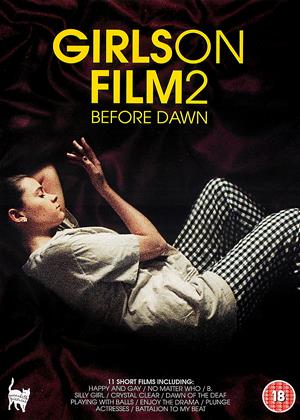 Synopsis:
An electric collection of the latest, award-winning lesbian and feminist short films exploring fantasies, dreams, desires, love and transgression. Featuring chance encounters, teenage lust, girl fighters, self-conscious dolls and rampant zombies alongside journeys of self-discovery, the fight for equality and a playful take on stereotypes. 'Girls on Film 2' takes you on an incredible adventure from America to Australia through Iceland, the UK and Morocco into worlds beyond.

Happy and Gay
A queer revisionist history of 1930's black and white cartoons, 'Happy and Gay' is a musical cartoon inspired by the power of representation.
No Matter Who
It's summertime and a troop of young girls are headed to scout camp. Together Marie and Lise discover the first spark of desire, a desire at odds with their group's morality and principles.
B.
Torn between a cold relationship with K. and her feelings for another woman, shy and insecure B. is heading for disaster. For too long she has suppressed her desires and lived a lie, but is it too late for B. to follow her heart?
Silly Girl
"Silly Girl" it's all about the first time you are noticed, that first time someone sees you for who you are and the transformative nature of that moment.
Crystal Clear
An erotic narration of a date unfolds. Packed with fantasy, expectations and unnecessary emotional baggage, we watch from a face-sitting, boob smothering, explorational point-of-view.
Dawn of the Deaf
In London a small group of deaf people are spared when a strange sound wipes out the hearing population. As they try to come to terms with their situation, the bodies start to move…
Playing with Balls
As tempers (and temperatures) rise between a couple on the tennis court, a group of older lesbians become intrigued with the goings-on, and one of them is inspired to take the opportunity to act on her desires and escape her daily routine.
Enjoy the Drama
A young woman reminisces about a loving but tempestuous relationship. Stepping into a now empty home she sets free a collage of moments. By revisiting her past, the young woman hopes she can finally move on with her life, but can she?
Plunge
Set in a beautiful lagoon in Australia, 'Plunge' follows a romantic day trip to a beautiful Australian lagoon tests the relationship of two young lovers, and our relationship to what is there and what might belong to the realm of fantasy, or of memory…
Actresses
Set in New York, 'Actresses' follows the emerging and slightly tumultuous relationship between an aspiring and an established actress.
Battalion to My Beat
Set in the Western Saharan refugee camps in Algeria, the story follows a rebellious teenager, Mariam, who decides to run away from the camps to join the army in the middle of the desert, believing herself a Joan of Arc who will liberate her homeland from occupation.
Actors:
Rebecca Henderson, Taylor Hess, Caroline Ward, Haley Bishop, Radina Drandova, Stephen Collins, Ciara Baxendale, Mollie Lambert, Jason Barker, Ilys Barillot, Louisiane Gouverneur, Mariam Omar Ahmed, Jeni Bezuidenhout, Juliet Hindmarsh, Maggie Caporal, Tatiana Grasso, Svandis Dora Einarsdottir, Guðrún Gísladóttir, Margrét Helga Jóhannsdóttir, Kristbjörg Kjeld
Directors:
Hope Dickson Leach, Jeremy Hersh, Eimi Imanishi, Anne-Claire Jaulin, Kate Lefoe, Nanna Kristín Magnúsdóttir, Lud Mônaco, Lorelei Pepi, Rob Savage, Kai Stänicke
Producers:
Various
Writers:
Various
Aka:
Girls on Film 2: Before Dawn
Studio:
Peccadillo Pictures
Genres:
Drama, Lesbian & Gay, Romance

Reviews of Girls on Film 2