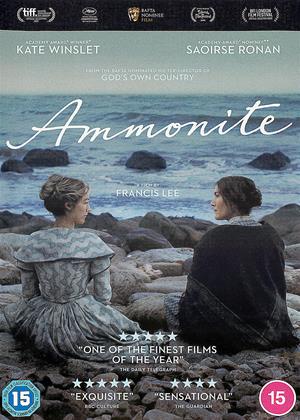 Synopsis:
In the 1840's, acclaimed self-taught palaeontologist Mary Anning (Kate Winslet) works alone on the wild and brutal Southern English coastline of Lyme Regis. The days of her famed discoveries behind her, she now hunts for common fossils to sell to rich tourists to support herself and her ailing widowed mother. When one such tourist, Roderick Murchison (James McArdle), arrives in Lyme on the first leg of a European tour, he entrusts Mary with the care of his young wife Charlotte (Saoirse Ronan), who is recuperating from a personal tragedy.
Mary, whose life is a daily struggle on the poverty line, cannot afford to turn him down but, proud and relentlessly passionate about her work, she clashes with her unwanted guest. They are two women from utterly different worlds. Yet despite the chasm between their social spheres and personalities, Mary and Charlotte discover they can each offer what the other has been searching for: the realisation that they are not alone. It is the beginning of a passionate and all-consuming love affair that will defy all social bounds and alter the course of both lives irrevocably.
Actors:
Kate Winslet, Saoirse Ronan, Gemma Jones, Sarah White, Liam Thomas, Sam Parks, Fiona Shaw, Claire Rushbrook, Alec Secareanu, James McArdle, Nick Pearse, Victoria Elliott, Beatrice Curnew, Susie Baxter, Gethin Alderman, Robert Purdy, Max Dowler, Paul Dodds, John MacKay, Mladen Petrov
Directors:
Francis Lee
Producers:
Iain Canning, Fodhla Cronin O'Reilly, Emile Sherman
Writers:
Francis Lee
Others:
Michael O'Connor
Studio:
Lionsgate Films
Genres:
British Films, Drama, Lesbian & Gay, New Releases, Romance
Countries:
UK

History lost in the passion - Ammonite review by PD

This one concerns the life and work of Mary Anning, whose contributions to palaeontology influenced Darwin. It depicts a middle-aged Anning, played by Kate Winslet, being acclaimed for her work but being also overlooked within the scientific community. She lives a modest life on the Jurassic coast, spending most of her days searching for fossils to sell to tourists in order to support herself and her mother. But the mundane routine of her life is disrupted by the arrival of a young middle-class woman, Charlotte Murchison (Saoirse Ronan), who has been instructed to convalesce by the sea by her husband, Roderick. The pair quickly develop an intense relationship that changes their lives.

The film is beautifully shot and unsurprisingly well-acted, but, watchable as it undoubtedly is, I'm coming away thinking Mary Anning has been sold short here. Yes, it makes us painfully aware that Anning was getting a raw deal in professional terms, and that, as well as being female, one of her major disadvantages was her working-class roots. But unfortunately there is very little exploration of this due to the central focus on a romantic lesbian relationship, of which there is absolutely no historical justification beyond (presumably) an inference from the fact that Anning never married.

Lee wants to portray two lonely women united by the constraints of their gender within a patriarchal society - but while this is may well be a laudable aim, it plays havoc with what we know of Murchison, who, far from being restricted in opportunity by a controlling husband, was in fact the impetus behind his career. Interestingly also, the real Murchison was about a decade older than Mary, whereas her the age difference is switched so that Anning is the senior of the pair, which is very odd. Worse still, Mary was emphatically NOT some kind of misanthropic outsider. She maintained a number of close female friendships and professional relationships throughout her life, notably Elizabeth Philpot, who built on Anning's work. Philpot does appear (played by Fiona Shaw), but here she takes the form of a local villager whose relationship with Anning is somewhat strained, Philpot's charm and warmth serving as a mirror to Anning's aloofness; predictably, there is a suggestion that Philpot is a former lover of Anning, and that this is the source of the tension between the two. I find this a shame, because we have no indication that this was the case - quite the contrary in fact.

Perhaps a more historically accurate (or at least plausible) film would not have received the attention that this has got. And of course it's perfectly possible just to ignore the fact that it's based on Mary Anning and just let the tale stand in its own right. But I still find it a bit of a pity that the 'real' Anning is lost amongst the passion: surely a tale of the dawn of science meets female enablement would have been of interest? It says a lot about us, I fear, that we just can't let Anning's intellectual achievements speak for themselves.

An engaging period watch, though VERY roughly based on historical happenings - Ammonite review by ST

See the PD review for the historical detail that has been malformed.

... but for anyone who likes period fiction, with great acting, and an engaging plot this is a fine piece IMHO.

Just remember to not let it rewrite historical fact in your mind. As of course you wouldn't with 'The Favorite' or 'The Death od Stalin'

The direction of this was dull, dull, dull and it felt like a directorial vanity project. It went nowhere and it’s two hours of my life I’ll never get back.

Saoirse Ronan is perfection, but this film also has some gaping flaws & narrative frustrations - Ammonite review by TB

I loved God's Own Country (GOC,) so when I heard about Francis Lee's new film & the incredible cast starring in it, I was immediately on board. GOC was in many ways a film which subverted the normal romance film, in that it was absolutely a film which you "felt," whether it was the cold in the air up on the farm, or the smell from the farmyard animals, or the warmth from a crackling fire. It was also a film which showed sex & intimacy in a realistic & mature way.

Ammonite starts off very well & in this kind of vein: everything that you loved about GOC is present. Kate Winslet is always fantastic and, ever since I saw her in Brooklyn, Saoirse Ronan is probably the most skilled & perfect young actress working today, able to convey so much with just a look or a sigh. The chemistry is great between them, and there are fantastic supporting characters as well. Welcomingly, Gemma Jones & Alec Secareanu return from GOC, and their characters add nicely to the film. There is also a welcome amount of letting the characters breathe & letting the actual acting shine through, something which is a rarity in many films today.

But after about 30 minutes, there then are some quite significant problems...

The biggest one for me was the fact that the "coldness" theme, either in reference to the temperature outside on the beach or inside the house; or the temperament of some of the main characters, was so overplayed it then started to undo a lot of the good work that the film had started to build. By this, I mean that after an hour, we as the viewer don't need it constantly shoved in our faces in a very direct and blunt way that the location the characters are in is cold. Whereas GOC set this up then let it rest in the background, Ammonite will constantly put this front & centre, at the expense of other elements which we are then distracted by.

The coldness of predominantly the main character was also something which became extremely wearing after a while, in the sense that as things went on, you wanted & also expected that the warmth & care shown to her would then start to change her, not necessarily in a stereotypical way, but in some way. And yes, at times you did see this. The problem was that any time it was shown, it then immediately gets snapped shut and dourness & miserableness returns. This in turn then makes the character unlikeable, when all I really, really wanted was to like her, both as a person and for the achievements and decency she has as a person. The zenith of this was the love scene, which was shot and acted so beautifully and really seemed to be the pay-off that the audience needed, followed by the next few scenes totally undoing this great work.

I appreciate that I am comparing this film a lot to God's Own Country, but when that as a piece of work was so great, and this film carries over many of the elements which had worked before, plus had a large number of the same cast/crew, I actively wanted it to work.

For me, far and away the best thing about the film is Saoirse Ronan and I hope that she is richly rewarded for her work come awards time. What she does with, in many ways a very limited amount of material, is incredible. She is vulnerable, feisty, loveable, naive, strong and resilient in every way you could imagine. The horror that she has been through before the story starts is one which is unimaginable, and one that she is expected to simply bounce back from. And this is where her performance really does lift the film. Her arc is the one which I was totally lost in. And in the final scenes, where she is trying to love & help Mary Anning, only to be shut down brutally & almost without emotion are very difficult to watch.

Whilst I really wanted to love this film and it absolutely has great elements, I still find it very hard to wholeheartedly recommend it, given the script & structure. But still a great & moving effort, with some flashes of genuiene inspiration.