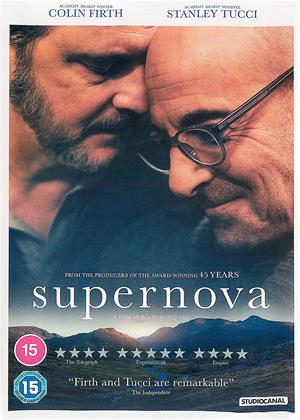 Colin Firth and Stanley Tucci give outstanding performances of such nuance that i feel these are probably some of their best performances in a lifetime. It is a very moving film that handles the subject of dementia, right to die choices and grief with extraordinary sensitivity. It feels more like being in the same room as the characters rather than watching through a screen. It is a remarkable achievement.

A quietly affecting depiction of how a long-term couple negotiate the inexorable effects of dementia, Harry Macqueen’s second feature relies heavily on the comfortable chemistry between the two actors, long-time friends off-screen, to bring its central relationship to life. The result is a bit 'talky' and could easily be re-imagined for the stage, but generally it is a beautifully modulated drama that is unforced and naturalistic, perfectly played by Colin Firth and Stanley Tucci. It's a sort of road film, with the couple travelling through the Lake District in a campervan en route to a comeback recital, but it's centre is a study of the adaptation of grief. Tucci is in quixotic, intoxicating form, using cheek and wit to hide a reservoir of feelings, a man who desperately wants to be remembered for who he was, but it’s Firth who provides the real heart of the film, skilfully capturing the strange predicament of loving someone with dementia, that sense of mourning a person while they are still alive. Neither Tucci and Firth give showy turns; instead they are reserved and refined, and Supernova is all the more moving for that (although there are some unnecessary sentimental touches and a somewhat cloying score), whilst the gorgeous autumnal shots of the Lake District courtesy of Mike Leigh cinematographer Dick Pope are neatly interwoven with the action. Yet it is a film that works by stealth. It starts with an accumulation of intimate, everyday moments that feels like it is going nowhere fast, but gradually without warning you feel deeply involved in these characters’ relationship and predicament - at a family party Tusker is told, despite his illness, “You are still you.” “No, I am not,” he replies, “I just look like him".

Firth and Tucci are definitely stronger than the script, which is a tad thin at times, and Macqueen often feels like he’s aiming for a lighter touch than he ends up using, whilst the tasteful, minimalist approach often precludes true connection and meaning - for dementia deserves more serious treatment. But such weaknesses are more than made up by the performances, which are lovely, and they successfully carry this minor-key piece, especially in those sequences in which Sam and Tusker cuddle up together and we understand just how much their lives are intertwined.

A beautifully shot film about a life ending, and a partner's struggle to come to terms with the idea of becoming alone. Great performances as you would expect from Colin Firth and Stanley Tucci, and some breathtaking scenes of the Lake District. Definitely recommended!