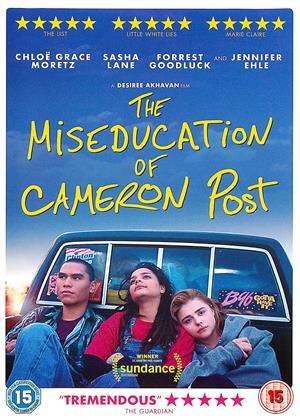 This film is well made, very well acted, and tells an important story. But I didn't enjoy it that much. While it was set back in the 90s, so-called "conversion therapy" still goes on, and it just made me angry. I had hoped that the kids reaction would be a bit more subversive and confrontational, but mostly acted as victims in the awful situation they had been placed in.

This is one of those oddities - a film that Mark Kermode liked a lot, and I didn't :-)

Whilst the subject matter is dark this is a poignant, witty and unashamedly defiant social drama and coming-of-age film. It tells the story of Cameron (Chloë Grace Moretz), a teenager who is caught making out with another girl at the High School prom and is sent to a christian gay conversion therapy centre to 'cure' her of her same sex attraction sin. Already a little confused by her blossoming sexuality Cameron is further traumatised by the emotional abuse meted out by the head of the centre Dr Marsh (Jennifer Ehle) and her 'ex-gay' brother (John Gallagher Jr). But she finds comfort in the friendship of two misfits Jane (Sasha Lane) and Adam (Forrest Goodluck) who have found a way to deal with the daily round of accusations the young people all face from the staff. This is a powerful film told with aplomb and a warmth that highlights the frightening power exercised by ultra religious groups in the USA but also the plight of young men and women struggling to find their place in the world. A film well worth checking out and like Boy Erased (2018) it reveals the awful price of gay conversion therapy.

Teenage sexuality is awkward and frightening, especially if it leads one down unfamiliar territory. Having such feelings and desires can be very difficult to process and come to terms with. Some people never come to terms with it. The Miseducation of Cameron Post comes as a cautionary tale of when adults try to rectify sexual desires away from the Christian definition of being impure and immoral. It’s unacceptable for such families to believe that their son or daughter may have desires for the same gender. It must be a lack of faith. What other reason could there be?

The film takes place in the 1990s as a bit of hope that this ugliness of American culture is behind us, which it isn’t. Cameron Post (Chloë Grace Moretz) is established as a teenage girl that tries to conceal her lesbian desires, but can’t keep them locked away. She lets them loose on prom night where she whisks another girl to her car for an intimate encounter. Her male date discovers her in the car and she’s busted. Her parents are outraged. There is only one thing to do in their mind; conversion therapy.

One long car ride with the Christian propaganda station on the car radio, Cameron arrives at a camp established for turning gay teens into straight adults. It’s all smiles and assurances from camp counselor Reverend Rick (John Gallagher Jr.). Fewer smiles are to be had with the all-business Dr. Lydia Marsh (Jennifer Ehle), whose methods have apparently been successful enough to rescue Rick from a gay bar. Offering further assurance of the program’s effectiveness is Cameron’s roommate, Erin (Emily Skeggs), having made great progress in repressing her urges. All Cameron can think about is wanting to go down on Erin while watching a movie in dreams so real she can hardly tell what is the reality.

Could you blame her? Repressing your sexual urges within a camp setting doesn’t seem real. One of their exercises seems so strange; a drawing of an iceberg where the campers must write down their homosexual urges that have manifested their impure thoughts. In a moment where Cameron reads all the urges on the wall that are seen as a sin, it’s but humanizing and shocking to read into what other teenagers experience and how they view themselves as people for enjoying something of an attraction to the other gender.

Of course, the kids are kept here against their will, only allowed home when their strictly Christian parents deem them suitable enough for society. They are bitterly frustrated with being ostracized from society and their families. It isn’t long before one of them snaps and mutilates himself in hopes that removing their genitals will prevent any sexual advances. After all, if you can’t prevent your sexual urges, cutting off sexual parts seems acceptable considering the nature of the camp that wants everything swept under the rug.

This film is incredibly hard to watch at times, but also very sobering. Perhaps the best scene is in how the camp deals with the aftermath of the genital mutilation. The counselors try to explain it delicately and quietly, keeping everything as low-key as they can to avoid the obvious which Cameron states; “You people have no idea what you’re doing. You’re just making it up as you go along.” When homosexuality cannot be tamed, those who want to control it will try to find a way to sweep it away as little more than a disorder. But there is no control short of persecution and genocide; everything else is just repression which eats away at the soul, to the point where even Rick finds the denying unbearable.

The film ends on a bittersweet note where Cameron and her gay camp friends escape the camp, but by their own means. Their parents will not help and the government, despite launching an inquiry after the incident, does nothing. There is no help coming from the gay community. The sad truth is that many teenagers do depart and run away to escape such torturers. The film, while strictly blunt in its messaging of sexuality and religious foul play, makes this a staggering piece of drama, equal parts tough and important.