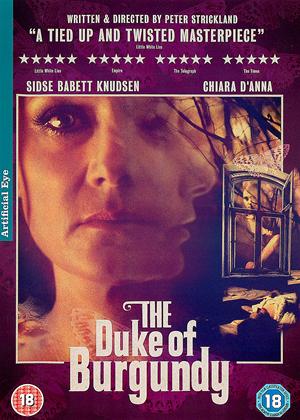 Reviews (5) of The Duke of Burgundy

Aesthetic cinema - The Duke of Burgundy review by PT

Indulgent nonsense - The Duke of Burgundy review by CP Customer

I really don't know what all the fuss is about this film. Yes it has some clever camera work and is filmed in a nice location which means that there are some landscapes, nature shots etc. but hey, I can go to an art museum if that's what i'm looking for. As to the 'story'... er, two middle aged lesbians one with particularly weird sexual needs and the other very accommodating YAWN!

Be nasty - spoilers follow ... - The Duke of Burgundy review by NP

I was initially drawn to this production due to the involvement of the mighty Monica Swinn, who had made many sexploitation and horror pictures throughout the 1970s and 1980s; this is her first main feature film since 'Les petites sauvages' (1982). That Swinn only features briefly and without dialogue is the only disappointment I have with 'The Duke of Burgundy'.

Named after the (Hamearis lucina) butterfly, this story features Cynthia (Sidse Babett Knudsen), who lectures on lepidopterology, and Evelyn (Chiara D'Anna), who appears to be not only one of her students, but her maidservant as well. Cynthia's strictness with Evelyn's hygiene and accuracy initially appears cruel and bullying, but as the standards become more outlandish, it is clear there is something else going on here. They are lovers, whilst Cynthia appears to be the dominating personality, it slowly become apparent it is Evelyn who is making the demands, and they soon become unrelenting. Uninterestingly, I mistook Evelyn's safe word 'pinastri' for a plea to 'be nasty.' Well, you never know.

Whilst you could dismiss this as two eccentric ladies squabbling amid truly breath-taking surroundings, the 104 minute run-time is filled with more interest than that. Events are by turn funny, mesmerising and ultimately strangely saddening, as the need to keep up the charade, as well as the possibility of encroaching age, becomes wearing and upsetting.

Waste of time - The Duke of Burgundy review by NC

Fitstly, I don't remember ordering this, secondly the unattractiveness , poor acting skils and full gloss tights of the main heroines have put me off so much, I will be watching that 'Add to my list ' button very carefully now.

I rented this as it has a 94% fresh from Rotten Tomatoes and some 5* reviews as an art film. It must be good then?

I really couldn't see why it got these reviews. It seemed to be the plot of a low-budget art-movie crossed with the cinematography and production values of a 1970s soft-porn film: all soft focus stockings, lingering shots of leaves and streams then panning up to solarized views into the sky. I would have said it was some post-modern ironic statement except that the film seemed to take itself very seriously indeed. I am still somewhat baffled about the whole thing. The actors play their parts well enough but what on earth was the director thinking?