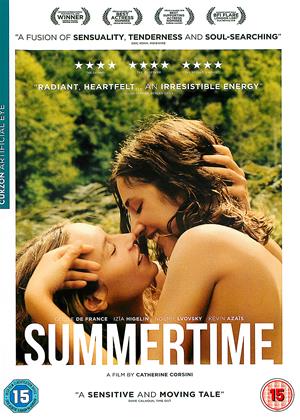 Well, firstly, this movie could only be French; my goodness it is so French. Languid pacing is one of those defining characteristics, as is the distinctively euro-realist cinematography. It revels in creating an atmosphere of place and in this it is extraordinarily successful.

I'm not the first to make this observation, but there are many striking similarities with Blue is the Warmest Colour. Very much in the same emotional territory. You can identify several scene-for-scene parallels between the two movies. Follow that comparison through to the way that each film presents the consuming passion of the characters' lovemaking and you have the foundation for a lengthy debate about a male or female director's approach to such scenes. In the case of Summertime, director Catherine Corsini has said that she didn't want the film to be an 'opportunity for guys to come watch some skin'. Be that as it may, there's certainly still an uninhibited frankness to the film's sex scenes.

But, as with Blue, despite indulgently celebrating the physical, that really isn't the point. Above all Summertime is just a romantic love story, simply and beautifully rendered, though one that is also grimly bounded by the barriers that stand between the lovers and their chances for happiness. More than the moral censure of a rural community, ultimately the near insurmountable challenge proves to be the immutable forces of cruel fate and family duty.