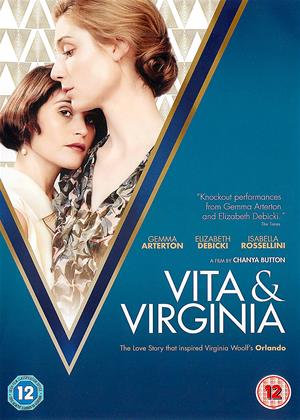 Reviews (5) of Vita and Virginia

Imagine a typical period drama – classy, well-intentioned, flawlessly acted, staidly shot and utterly bland. Here’s another one. It will certainly hold interest for anyone fascinated by the Bloomsbury set, but the two lead characters never seem more than theatrical constructions whose see-sawing central relationship never grabs.

It grew out of a play by Eileen Atkins, who also wrote the screenplay, and it shows. Correspondence between characters, for example, is shown by having them read their letters out loud to camera, as they did on stage. Director Chanya Button also comes from a theatrical background and doesn’t have the cinematic imagination to translate her enthusiasm for Woolf (as evidenced by an interview on the DVD Extras) to the screen.

The film is made with such earnestness and sincerity by all concerned that it’s a shame to be negative but, judged as a film, everything about it screams Sunday night heritage television.

Overly theatrical and mannered - Vita and Virginia review by GG

There is a fascinating tale to be told, about this relationship, but this is not it. Technically, the film is wonderful. However, the acting is highly mannered, in a most distracting way, and the dialogue is terribly stilted. I was rather looking forward to it, but found myself becoming very bored, rather quickly, which, when you consider the dynamic characters involved, was quite a surprise.

Vita and Virginia is a fascinating and moving film about the passionate liaison between Vita Sackville-West, a wealthy aristocrat, and Virginia Wolfe, a genius, during the late 1920’s.

Vita, played by Gemma Arterton, is a predator; think Gentleman Jack—Anne Lister—but with far fewer moral scruples. Despite the scandal that would have befallen her, and her husband, if her ‘preferences’ had become known she relentlessly pursued Virginia, a happily, though barely and rarely consummated, married woman. Vita’s marriage, in contrast, was a pretence and a convenience , both to her and Harold Nicolson, a gay man at a time in history when that not only would have ended his diplomatic career, but would have seen him serving prison time.

For me, the most intriguing aspect of the film was that Virginia, played wonderfully by Elizabeth Debicki, would go on, from the emotional trauma of her affair, to produce one of the finest pieces of 20th century literature; Orlando. A genuinely ground-breaking piece of work; a story that spans the centuries between the 1500’s and the present day; a story of a man who becomes a woman who becomes a man. As Orlando says when ‘he’ looks in the mirror for the first time and sees ‘herself;

The film is a slow starter, and in fact for the first twenty minutes it wasn’t working for me. The script, I believe, is trying to hard to fill in backstory, leading to the impression of watching a lecture, rather than a drama.

The film was researched and written mostly from the correspondence between Vita and Virginia while Vita was away with her husband in Tehran and Berlin. The director filmed some scenes with each actress staring, almost expressionlessly, at the camera while reading from each other’s letters. It makes for a most personal experience, as if seeing back in time to the real women.

As a writer I find biopics of authors fascinating, if done well. To see the thought processes and writing habits is interesting. Virginia and her husband founded and ran Hogarth Press between them in 1917, and Virginia wrote in a room at the end of the workshop where they ran their printing presses. If the door to the writing room had a white chalk cross marked on it then she was writing, and wasn’t to be disturbed.

As an interesting aside (at least I think so) Eva Green was originally cast to play Virginia but dropped out to star in Dumbo (2019). An interesting career choice that appears to say more about money and exposure than finding challenging roles. She was OK in Dumbo, but Danny de Vito starred. Although, thinking back on Vita and Virginia now I believe that she would have been better suited cast as the manipulative and passionate Vita. But we shall never know!

Another Insight into the Sissinghurst set! - Vita and Virginia review by AA

Interesting film covering the association between Vita Sackville West and Virginia Woolf leading up to the writing and publication of Orlando, Virginia's book where she used Vita as an inspiration.

Visually a good period drama. I simply thought the story was boring and couldn't warm to the characters.