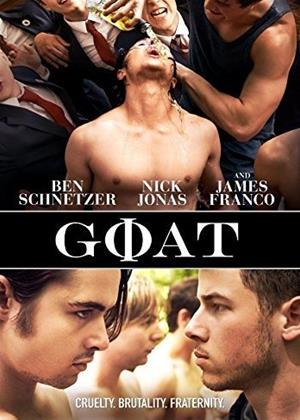 Synopsis:
Reeling from a terrifying assault over the summer, 19-year-old Brad Land (Ben Schnetzer) starts college determined to get his life back to normal. His brother, Brett (Nick Jonas), is already established on campus and with a fraternity that allures Brad with its promise of protection, popularity, and life-long friendships. Brad is desperate to belong but as he sets out to join the fraternity his brother exhibits reservations, a sentiment that threatens to divide them. As the pledging ritual moves into hell week, a rite that promises to usher these unproven boys into manhood, the stakes violently increase with a series of torturous and humiliating events.
What occurs in the name of "brotherhood" tests both boys and their relationship in brutal ways.
Actors:
Ben Schnetzer, Nick Jonas, Gus Halper, Danny Flaherty, Virginia Gardner, Jake Picking, Brock Yurich, Will Pullen, Austin Lyon, Eric Staves, James Franco, Jamar Jackson, Kevin Crowley, Lauren Knutson, Jon Osbeck, Denise Dal Vera, Pepper Sweeney, Clare Combest, Nick Rose, Annie Grove
Directors:
Andrew Neel
Writers:
David Gordon Green, Brad Land
Genres:
Drama

Not released
The Broken Tower

Not released
My Blind Brother

There’s a twisted relief I felt watching the grotesqueness of Goat. It’s that shivering sensation where you know you’ve dodged a bullet, that you didn’t associate with the wrong people and grew up in the right neighborhood. But it’s a pleasure I don’t relish and find myself with the bitter aftertaste for the cruel and gross hazing of the fraternity mindset. I never went to a university or pledged to a fraternity and feel all the more grateful considering the true events that transpired in this tale.

Brad Land (Ben Schnetzer) is heading off to college and is in for an earthquake for his perceptions of the world. He attends a party with his brother Brett (Nick Jonas) and strives to be sober. For his refusal of drugs and a one-night-stand, he is driven out to a field and beaten by some random guys. He recovers but is left terrified after the event, the criminals not found. This makes his college experience all the more disheartening when trying out for his brother’s fraternity. Constantly called a beta for not drinking enough or accepting the degrading hazing, Brad’s perspective of proving himself soon begins to warp as the pledge activity grow more humiliating.

For the rest of the film, we watch as Brad is relentlessly hazed to a disturbing degree. He is stripped, beaten, and forced against his will into the most demeaning of acts that range from being locked in a kennel to being tricked with blindfolded fellatio. Credit should be given for the lack of trying to stage these scenes as amusing, portrayed mostly without music and a close camera for the true vileness of these rituals. It’s tough to watch, but there always felt like there was an importance to the film being this raw. This pays off greatly when Brad’s morality quickly chips away to the point where he is not only loyal to the frat but rejective of any and all accusations of abuse. It’s even more heartbreaking when Brett realizes too late what he himself has done.

But the hazing is not only the grosses and most depraved showcases of the film, but also the most elongated. The audience watches helplessly as pledges are shoved into a meat grinder of mockery and we’re trapped right alongside them I’m surprised the rowdy frat boys didn’t start pouring beer on the camera. One must keep reminding themselves that you’re supposed to be disgusted by all this, but it still doesn’t fully erase the gut-reaction that you’re watching someone’s very vile fetish shot in the manner of a snuff film.

A film such as this is tough to view and even tougher to recommend. For being based on a true story, it carries with it a warranted bold message on the damaging effects of hazing. At the same time, it’s a blood-boiler of a picture; even if you know how this all plays out, there’s the overwhelming hint throughout that nobody will answer properly for the factions of a frat that soon turns deadly. Perhaps reminiscent of a true hazing, it’s an experience that you never want to relive, even if it demands one viewing to fully comprehend its ugliness.