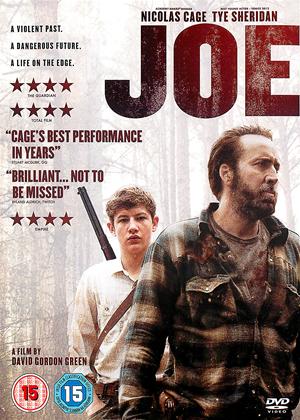 This is a well-acted movie. Nicholas Cage comes into his own as a rough and ready country farmer-type. It hols your attention throughout. The only drawback was deciphering the southern drawl at times!

This film really is poor, there is little to no story line and I found myself getting up and and making a cup of tea without even pressing pause. Nicholas Cage must be running low on cash, what a let down!

what a waste of time - Joe review by RD

What a really bad film you would have more satisfaction watching paint dry it was so boring we only managed 10 mins even though I really like Mr cage as an actor.

I found this an interesting watch to be honest BUT do wich there'd been a subtitle option as some of those broad southern drawls are incomprehensible.

I also suspect any racial issues have been brushed over - I would expect blacks and whites to live in less harmony in their forestry jobs AND would expect an old drunk redneck white to racially abuse a black manager who sacked him. But I suspect Hollywood hasn't got the guts to use the N word any more.

So, ho-hum - and interesting not an exciting watch.

Very disappointing to see a good actor like Nicholas Cage is such a bad film. Even if the DVD had subtitles, there was little in the dialogue that revealed much that wasn't already obvious form the action. This is a part of Texas that should be avoided.

Bit of an odd film, not a load of stuff happens in this at all but it is interesting. I kept watching it thinking it would get better, you know a bit more action going on, but it just doesn't.

Really well acted by everyone but just a bit slow throughout.

I approach every Nicholas Cage film with trepidation, much to the chagrin of my other half who swears the memes are not to be believed I cannot help but find even the mention of his name, let alone the nasal drawling of his voice or that infamous high forehead, enough to put me off a film. Joe proves me wrong and reminds the unfaithful like myself why Cage has remained a Hollywood staple for so long, and he isn’t even the best actor on show.

Cage plays the titular Joe, an ex-con who life consists of dull work, alcohol consumption and the occasional trip to a brothel, he has few friends, though it would be an injustice to say he has enemies, and no purpose in life, he is neither happy nor miserable, he simply exists. Joe’s life is changed when Gary, played by Mud’s Ty Sheridan, comes to him in search of work. A neglected son of a drunk and abusive father Gary has spent his short life scrounging for food for himself and his sister out of trashcans and dumpsters and wants only to earn enough money to buy his dinner like any other dignified human being. The film depicts the interaction of these two characters and the relationship that develops between them and culminates (spoiler alert) in them both leading somewhat improved lives thanks to their meeting.

However, as with any narrative the heroes, as lose as the term may be in this case, must face some kind of obstacle; for Joe and Gary this obstacle comes in the form of Wade, Gary’s violent father. Upon learning that his son is earning money and not sharing it with him Wade inserts himself into the small world inhabited by Gary and Joe and wreaks the darkest and most horrifying of revenge. And it is his performance that smashes the young and talented Sheridan’s and walks all over Cage’s soul scraping portrayal of Joe.

Wade, played by the late Gary Poulter, is a character whose depths are dark and unexplored, whose soul is a black abyss and whose eyes flame with impotent hate and fury, he is one of the greatest and most terrifying villains I have seen on screen as an adult and is likely to haunt me for as long as the dreaded stepmother of Snow White poisoned my childhood dreams. What makes Wade all the more powerful is the sad fact that, no less than three months after Joe was released, Poulter, himself a recovering addict, was found dead by apparent suicide,

The narrative may not be ground-breaking and the script is hardly a work of genius, however a character based film can only truly exist if it is populated by actors with talent and Joe has that in spades.