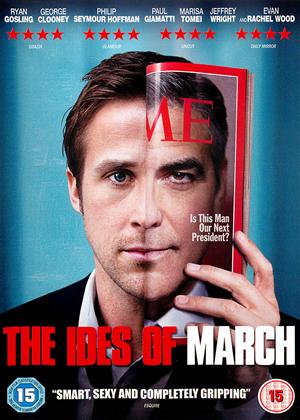 Reviews (2) of The Ides of March

There is one thing that lifts this movie above the standard boring US political drama to make it clever, twisting, intelligent and thus entertaining: the writing. I noticed in the credits that it is based on a play - and that's no doubt why. There is some great writing, some unexpected plot twists, and also fabulous acting from all involved. AND it is around 90 minutes - unlike the usual Hollywood movie which stretches up to an hour past that usually. This film is thought-provoking, succinct and precise. ALSO, Clooney has not just made a movie that supports and promotes Democrats. I loved the cynicism of the movie - which works in a plot twist on a smart phone (a first?). Politicians, agents and lobbyists are portrayed prety accurately in their ruthless ambition and hunger for power. I am not much interested in US politics or their weird primary system - where the supporters of the opposing party have a vote for the candidate of their enemy! But this film is just about the best of its kind. An intelligent, watchable film about politics of the type that Hollywood rarely makes.

A good but predictable film about US political dirty tricks... - The Ides of March review by RP

I always find George Clooney a little on the smarmy side, but here he is perfect in the role of the political candidate – and he also directed, and the result is a rather good film of its type. Ryan Gosling is good as the central role as the idealistic young press secretary, and the always excellent Philip Seymour Hoffman. In fact, all the roles are well acted. But it's yet another film about US politics (albeit a rather good one) and to this Brit viewer it's something I seem to have seen so many times before. 3/5 stars.

The Ides of March review by Alyse Garner - Cinema Paradiso

Starring and co-written by a man who is very much an accomplished Hollywood actor is the fourth directorial offering from George Clooney, an intriguing political drama The Ides of March.

The movie follows a Democrat senator in the influential American state of Ohio, where he (Clooney) is running for office. The real story however lies in character played excellently by Ryan Gosling. Gosling plays Stephen a press spokesperson for Clooney’s political campaigner, whose devoted fervor fuels the movie.

Stephen is ever enthusiastic and effortlessly charismatic, yet he finds his beliefs easily rattled when both his enemies PR manager (Paul Giamatti) and the beautiful Evan Rachel Wood – playing a political intern – manage to press all the right buttons.

The movie raises several interesting points about the political world and I found myself largely impressed with the dark and bleak tones of the story. When the credits began to role, however I found the points raised to be a little obvious, even contrite, whilst the film itself lacked flavour; missing out on that vital sharp edge that political dramas desperately need. This is not to say the movie isn’t good, Gosling is excellent it’s just that it aspires to more than it is able to achieve, give me the West Wing any day.