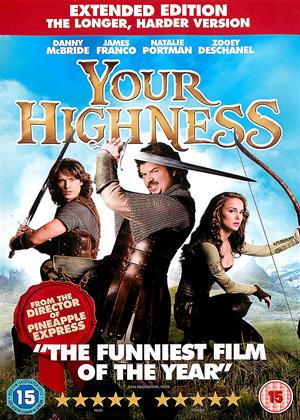 Sign up
Not the Messiah: He's a Very Naughty Boy

Sign up
Harold and Kumar Escape from Guantanamo Bay

Reviews (3) of Your Highness

Appalling, Your Lowness - Your Highness review by SB

After half and hour of watching poor acting, bad scripting and terrible sets my patience was wearing thin. The total lack of comedic timing and originality make this possibly the worst movie ever made in the name of comedy. But its lowest point had to be the jokes about the protagonist being molested as child by his guru... and then watching as he masturbated him! If you 5* givers find that kind of thing funny you best seek help. I hit STOP here and never made it to Nathalie Portman’s performance. One can only assume that she was the saving grace in this appalling excuse for entertainment. Why else would anyone give this five stars?

PS this is not a joke.

This movie is very funny, a laugh a minute. This has to be up there with Monty Python and The Holy Grail!! If you like good comedy's this is a must see.

A medieval sword and sorcery story with a comic twist, Your Highness is the most recent offering from Pineapple Express’ director David Gordon Green. The film tells the tale of two royal brothers; Fabious and Thadeous, played by James Franco and Danny McBride respectively; who must rescue Fabious’ intended bride (Zooey Deschanel) who has been kidnapped by the evil Leezer (Justin Theroux).

The film consists mostly of the expected crude and unimaginative comedy, which certain viewers will probably love. If that’s what you want in a film then this will easily satisfy and you will even be treated to a fairly decent fantasy film in the process. The comedy element of this film is no where near the same level as the very successful Pineapple Express and will only really pull titters of laughter rather than howls. The acting is – unsurprisingly – quite wooden, the brief appearances of 500 Days of Summer’s Deschanel and Justin Theroux the only promising performances. The only notable point of Portman’s performance as the warrior princess Isobel is that it is her second disappointing comedy performance of the year.

The movie takes every opportunity to make sex and drug jokes, including a ridiculously named ceremony to breed dragons given the eye-rollingly over the top title of “the F***ering”. The film is basically a chance for a bunch of Americans to have a whale of a time putting on silly feux-English accents and running around with swords and horses.

Ultimately the film is adequate but disappointing by Gordon Green’s previous standards.