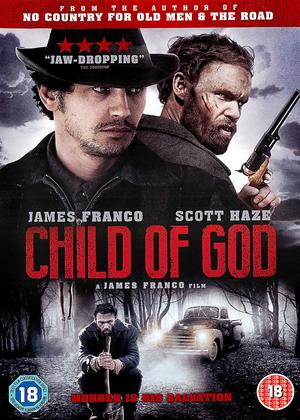 Reviews (2) of Child of God

Difficult film, disturbing subject matter, but a quite remarkable performance by Scott Haze - Child of God review by RP

Cormac McCarthy is regarded as one of America's most important modern novelists, but his works are regarded as 'difficult'. Some have been turned into successful films - 'No Country For Old Men' (4 Oscars, including Best Picture, 3 BAFTAs) and 'The Road' (1 BAFTA). Now comes director James Franco with the film version of Cormac McCarthy's 1965 novel, 'Child of God'. So, what's it like?

The film sticks pretty closely to the novel and its three-part structure, although the ending is different as Lester is shown making for the woods again.

This is not a film to be 'enjoyed'. What I can admire is the quite remarkable performance of Scott Haze who plays Lester Ballard. To say that he throw himself into the part whole-heartedly is an understatement - if anything, it's an over-the-top performance full of guttural gruntings and drooling.

Frankly, it's a pretty average film based on disturbing subject matter so I would normally rate it as 3/5 stars. But Scott Haze's performance is so remarkable that I'll give it another star for effort. 4/5 stars - but it's not suitable viewing for your granny or for children.

Obviously I did not read the write up correctly!! This film was rubbish, a complete waste of time unless you like weird.