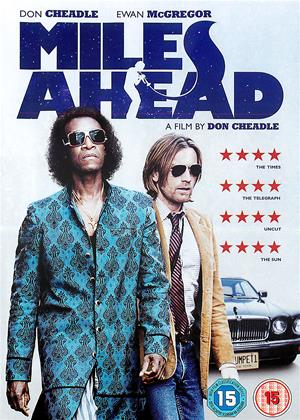 Reviews (3) of Miles Ahead

Enjoyable though romanticised biopic - Miles Ahead review by PV

The first thing for me to say is that this sort of freeform jazz is not my favourite sort of music. In fact, I tend to call it 'fire in a pet shop' music. I prefer a pleasant melody!

The second this is that this is a fascinating movie about Miles' retirement 1975-9 when he was high on cocaine and sex addiction (indeed after his death in 1991 it was revealed he was taking a drug used by HIV infected patients).

The ending is confusing - bearing in mind Miles Davis died on 28 September 1991. I knew little about Miles Davis except Some Kind of Blue from the late 50s, and the later jazz funk isn't really my thing.

But the film jobs along nicely enough, though I'd be surprised if this true story were not massively embellished.

I think Ewan McGregor is miscast though. I wonder if the Rolling Stone journalist was really Scottish at all!

Interesting too that Miles Davis came from a very prosperous and ranch-owning family, so not the oppressed African-American who made it at all! His dad was a rich dentist!

But still 3.5 stars rounded up.

Just another bio-pic - Miles Ahead review by MD

There seem to have been so many of these bio-pics in the last few years, especially ones about legendary musicians, and for me, despite a great performance by Don Cheadle in the lead role, this had nothing to make it stand out.

On the contrary, it seemed to be the same old story replayed. Miles Davis may have come from a rich family, but the focus throughout on sex, drugs and rock and roll (sorry, jazz!) was unremittingly familiar and not a little depressing - were all these great musicians really such a-holes?

I have to say that there was not even a lot of jazz to brighten things up, so all in all I found it a perfectly watchable movie, but neither a particular enjoyable nor enlightening one.

Maybe Miles away from Miles? - Miles Ahead review by NC

Car chase. Guns. Boxing. Maybe Miles in there somewhere? Loosely based on someone who once played amazing trumpet. Music is spot on. Accuracy is probably a bit Hollywood, but they all made a living, and one in the can...............

Miles Ahead makes itself clear from the very first scene that our hands will not be firmly held in this biopic on jazz legend Miles Davis. Don Cheadle plays the lead role with a cigarette in hand and large sunglasses, refusing to let us all the way in during the opening interview. He’s standoffish, intimidating, and refuses to be pinned down, preferring that his music not to be labeled as jazz as he finds it limiting. With this kind of attitude for a man at the twilight of his career, we’re merely along for the ride of trying to understand his rocky world.

One such person trying to peel back the man behind the music is Dave Braden (Ewan McGregor), a reporter from Rolling Stone trying to get the scoop on Davis. It’s not easy. Davis rarely talks to anyone after having been such a success. The only times he seems to talk is when he feels he has been represented or believes he is being robbed. While waking up, he calls into a radio station to correct the announcer, refusing to cooperate with an impromptu interview. He bursts into a record office and threatens those that own his music at gunpoint. If Braden hopes to keep up with Davis, he’ll have to gain his attention in a big way.

Braden manages to get on Davis’ good side by enticing him with vice. There’s a particularly great exchange when they both go to visit a cocaine dealer Braden happens to know. The price is high but Braden is able to talk down the price reasoning that Davis’ records have gotten him laid more than any in his collection. It’s a hilarious and also sobering moment that gives a mere glimpse into the more personal past of an inspirational icon.

That’s just from Braden’ perspective though. The film itself jumps around in time from inside Davis’ mind where we skip back and forth from the past, witnessing in bits and pieces the developing romance between him and Frances Taylor (Emayatzy Corinealdi). We see their relationship slowly rise with great passion that soon grows distant, both literally and emotionally. It isn’t too long before Miles calmer demeanor sours with both age, career, and the racial tensions of the time. Soon, as seen in non-linear fashion, the music becomes more important to him than anything, where the bulk of the film is him trying to retain ownership of what he loves most.

Cheadle, who also directed and co-wrote this film, gives a brilliant performance as Davis, playing both the chiller version of the younger Davis and the raspier older man who has grown disillusioned with almost everything in life. Most impressive is how well Cheadle eases into the musical scenes of playing trumpet, from Davis’ more golden days to his older years of ambling around his apartment while casually painting and playing music in his robe. But the film makes sure not to linger too long on the grim aspects, staging Davis’ life as an exciting one of many chases, heated arguments, and a few fights, one beautifully shot at a boxing ring where in his head, a younger version of Davis jams in the ring while the scuffle goes on in the crowd.

While Cheadle’s biopic on Miles Davis isn’t exactly the most encompassing of the story behind the legend, picking out the juiciest bits for the best entertainment, it never bores. It’s a presentation that seems a bit of a far cry from his smoother music; I used to walk to college every day with The Birth of Cool on my MP3 player which always made me feel a little more confident and inspired for the day. But the film certainly accomplishes its goal of showcasing how a man of such richly beautiful music had a life most rocky.