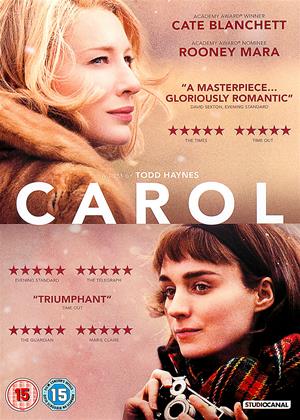 Good film, Blanchett et al are excellent, I enjoyed seeing the political and social situation in the USA in the fifties, the judgemental nature of male domination treating women so unfairly. Good direction, good pace. As a straight male born in a Latin country, I have become to understand much better now issues of gender / sexuality discrimination, patronising, etc. towards women.

I feel that men have taken the piss for a long long time . This is the kind of cinema I like, challenging, truthful, provocative. Good. 4 stars.

Disappointing and rather bland - Carol review by AK

I badly wanted to see this when it opened at the London Film Festival, but was unable to get tickets. It came and went quickly at the local cinemas, so I had to wait until it came out on DVD. It wasn't really worth the wait. While it certainly looks great - beautifully filmed - the plot is fairly standard (if there can be such a thing, I know) lesbian awakening, with a fairly predictable flow of: mundane, trapped existence/encounter with glamorous other/glimpse of another world/sucked up into erotic, exciting lust and love/face the repercussions/guilt/denial/and then? To be honest, I'd pretty much sorted that much out before the film even started. There was an interesting twist in that the other woman was a mother and engaged in a struggle for custody, severely compromised by what's seen as moral failings (everyone is suitably cagey) but it only serves to inform us that what all women really want, even lesbians, is motherhood. This, however, is disposed of with a left-field bit of sacrifice and selflessness that comes out of the blue, leaving the end...well, quite nicely open (the final shot is one of the film's best).

Performances are also predictable. As the awakened one, Mara Rooney looks blank and fed up most of the time, sporting a severe fringe that only reminded me of the lesbian character in "Home for Purim", the film-within-a-film in Christopher Guest's "For Your Consideration". Cate Blanchett exudes a haughty coolness laced with occasional hysteria, but it still feels by numbers.

For me, the real revelation was Kyle Chandler as Blanchett's on-screen husband, Harge (what kind of name is that?). A bullying, wounded beast, Chandler exudes a convincing blend of pain and confusion, and ultimately it's hard not to feel sorry for him. Well, I thought so, anyway.

It's not a bad film, but I had hoped for better.

This is a film in the tradition of Douglas Sirk. It oozes class, from the sets to the acting, but it’s painstakingly one-paced. Todd Haynes has previous with his 2003 film Far From Heaven. If you liked that, you’ll like this, otherwise you’ll be shouting ‘Get a move on’ at the screen. Everyone sounds as though they’re half-asleep and if you’re not in the mood to wallow in the slow burn you may well soon be feeling a tad somnolent yourself.

You’d hope a story about same-sex love and homophobia in the 1950s would pack a punch and have something relevant to say about modern mores, but sadly no. It takes soooo long to get anywhere.

Critics loved it, but they are forced to watch so much trash that any movie with impeccable production values must warrant superlatives. The more discerning filmgoer may wonder what all the fuss is about. You know where this movie is going right from the start so don’t expect any surprises, plot-wise or visually. Even the ending seems arbitrary.

Also, why do so many characters in films vomit to show they’re upset? Aren’t there more subtle ways for filmmakers to show emotion?

Slow and rather boring film. - Carol review by ND

With the cast list I was hoping to watch a good film but I was bored within half and hour. I agree with the review below from AK.

Slow in a perceptive way; don't expect ragingly-unrealistic drama. Instead, you get a wonderful recreation of 1950s east-coast USA, superb performances and an even-handed dealing. Thus, for example, the wounded husband is not a cardboard villain, but more clumsy and baffled than nasty. The film is pleasingly true to the novel's refusal to be [ultimately] gloomy about same-sex love. But be warned! This will be too slow for many contemporary tastes...