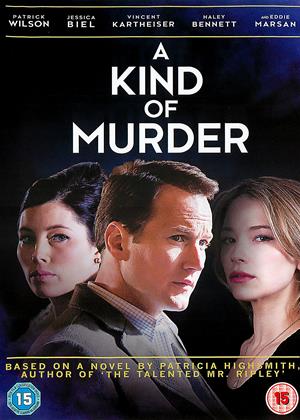 Reviews (1) of A Kind of Murder

This film, generally faithful to Highsmith’s novel, has distinct echoes of her “Strangers on a Train,” in that it details the intersection of two men with murder on their minds, even if it lacks the tension of Hitchcock's film. Rare bookstore owner Kimmel (Eddie Marsan) is a reserved loner whose wife has recently been murdered. Detective Lawrence (Vincent Kartheiser) eyes him as the prime suspect, though his potential guilt is also of interest to architect Walter Stackhouse (Patrick Wilson), who when not dealing with his depressed real-estate agent wife Clara (Jessica Biel) clips newspaper articles of murders as possible inspiration for the short stories he writes in his spare time.

Relocated from the book’s 1950s setting to the early ’60s, the film revels in the era’s clothing (dapper suits, wide-brimmed hats, even wider-bottomed dresses) and decor, which is drenched in heavily suggestive lurid reds. Walter soon begins an affair with young Greenwich Village bohemian Ellie (Haley Bennett), and their tryst sends the jealous, desperate Clara to attempt suicide. Susan Boyd’s script rather lacks the necessary psychological depth to get into to the head of Walter, with the result that it's difficult to comprehend just exactly why he visits Kimmel before Clara’s death and continually behaves in a manner so obviously destined to make himself look guilty, so it’s a testament to Goddard’s direction that the film, also embellished with cross-cutting between the past and present, keeps us engaged throughout, with his wintry metro-NYC visuals having a snow-globe unreality to them, and his framing ably conveying the constricting circumstances in which Walter finds himself.

Biel and Bennett fulfill their light/dark archetypes adequately enough, but it's Wilson who delivers the standout performance, locating a balance between arrogance, entitlement, paranoia and defiance — his mantra becoming, “I didn’t do anything wrong”. He embodies Walter as a mess of contradictions, all of them exacerbated by his fear that his situation, nominally created by one stupid decision after another, is the byproduct of a subconscious desire to be rid of his wife. He's neatly complemented by that of Marsan as a quiet, mousy man with the eyes of a viper, and their few scenes together are charged with a mixture of distrust and kindred-spirit admiration. Unfortunately however, Kartheiser’s smug detective is rather clumsy, coming across as mostly a sketchy caricature designed to fulfil basic narrative requirements.

Aka 'The Third Man', the film climaxes in dark, dank corridors where a killer’s pursuit of a potential victim is projected in shadow along cold, starkly illuminated walls. Goddard’s finale is pretty predictable, but in its swirling deathbed dream of ruminations, feelings and written words, it expands upon noir’s trademark fatalism, implying that doom befalls not only those foolish enough to try to change their lot in life, but also those thoughtless enough to think about doing so in the first place.