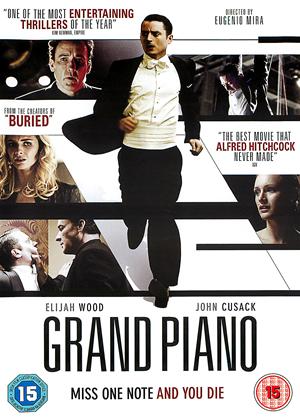 I loved this film. It's a classic thriller with a great premise. Elijah Wood is excellent in the part and the tension mounts relentlessly. I would definitely recommend.

I enjoyed it. I often watch films from Hitchcock's and the Black and White vintage suspense thrillers. The pace is similar to a classic who done it. The film focuses on the piano player, Tom Selznick, (Elijah Wood), who is a bit nervous about performing after a very public episode of stage fright. What the film asks the watcher to decide is if the player (Elijah Wood), is just suffering from nerves.

The scenes of Elijah playing are very good; I wonder if he learnt to play? There is support by John Cusack, Tamsin Egerton, Allen Leech and Don McManus. Leech was previously in 'Downton Abbey' as Tom Branson the Irish husband of Lady Sybil and the driver of the house

I felt the director Eugenio Mira, just wanted to focus on Elijah Wood's character and cared little for the female cast.

It created more of a back story however slight for its men. Although the film is about Tom Selznick’s character it would not meet the ‘Bechdel Test’. That could be because of the profession's (professional pianist), male bias. Either way it was Wood's film. The music is fantastic and could be watched for it’s soundtrack. I would watch the film again to see every part of the plot again. 4 stars as not everyone likes this type of music.

A smart and unusual thriller Grand Piano is the story of once notorious pianist Tom (Elijah Wood) who choked at his last major performance when tasked with playing one of the greatest, and most challenging, pieces in fictional music history. Returning to the stage for the first time in years and intending to play the aforementioned piece of music Tom finds a message scrawled on his sheet music reading “play one wrong note and die” and an ear piece with a creepy, disembodied voice giving him commands as a killer waits in the wings.

What follows is a tense hour or so of first and second half where Wood sweats his way through some truly amazing musical performances and John Cussack, our disembodied killer, makes terrifying threats in a low, gravelly voice. I have to admit I was really hooked, Wood’s physical performance and Cussack’s vocal one perfectly complement one another and help bring the film to a rising crescendo of edge of your seat intrigue and danger.

However the end of the film sounds more like a deflating balloon than anything else, Cussack appears in the flesh and not only loses most of his dark presence but also any believable resin d’etre and you’re left just wondering what all the fuss was really about.

The supporting characters do their best to plump up the subplot but this is also a bit of a wasted effort as, following the disappointing Cussack reveal, you lose pretty much all interest.

What the film does do expertly is the music, and rightly so considering the premise; with an original score written by Victor Reyes the music is brilliantly compelling and evocative, mirroring the tone of the film and, at times, creating it. Complete with the supposedly unplayable piece the sound track for Grand Piano is just stunning, it’s a bit of a shame about the rest of the picture really.