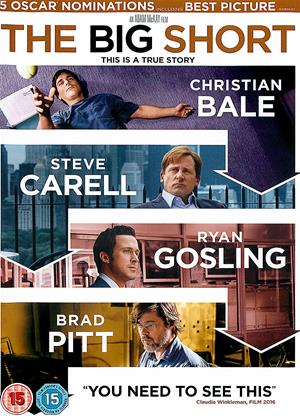 We've had "Margin Call" and "99 Homes" looking at aspects of the 2008 financial crisis, but this is the film that will bring home most forcibly exactly what happened, and why. Given that we are still labouring under the consequences of that time, and most likely heading for a repeat in the not-too-distant future, this is essential viewing. It is an intelligent film about complex issues and ideas, but it is never anything other than absorbing and entertaining.

It has a rather quirky style in parts that can be annoying, but for the most part the story tells itself, and what a story it is. An all- star cast play it very straight, and some of the lesser known players have a real impact; Steve Carrell was not an obvious choice to play the lead, but he carries the film really well, and you'll find yourself growing equally amazed, angry and peed off as he uncovers the truth.

Based on a true story, the written summary of what happened next (at the end) is almost as powerful as the film itself, and very worrying.

I can understand why many people don't like this film - it's incredibly complicated and the plot is an ever-moving moral downward spiral. I did understand all of it and in fact finally understood exactly what caused "The Great Recession."

5) A few people figured out what was happening, tried to warn the press and regulatory agencies

6) Those few people "shorted" those bundles. A "short" is literally a bet that an investment would fail

9) Banks that sold a whole lot of those bundles failed

Concentrate when watching this. Another description/explanation of the bank scandal that hit the ordinary man...........again........will not be the last of course.

Lot of names in this one. Not giving full effect as a group though. Pitt and Bale always noticeable throughout.

Margin call and 99 homes cover it well, but Inside Job is the easiest one to understand for me. Damon fronts up an almost documentary approach, with some of the people involved at the time. The criminal element is more noticeable, as opposed to the implied stupidity/negligence theory sometimes put forward in Big Short

So memorable I can't really remember it that well. Very complicated plot, difficult to follow after a day at work.

The Big Bore - The Big Short review by Alphaville

Hold the front page! This is the film about sub-prime mortgages for which you’ve been so avidly waiting. Not.

It darts around all over the place trying to make a boring subject cool, but that merely highlights the emptiness of the whole project. We’re presented with such a slew of financial characters that we need a Ryan Gosling voiceover to keep up. Celebrities break the fourth wall to explain financial products to the viewer. Mannered performances, jump cuts and irritating zooms all add to the irritation.

As a result, rather than making you angry at the banking crisis, the film makes you give up caring, which is a tragedy. Don’t be fooled by its Oscar nominations. Hollywood loves to pat itself on the back for addressing important issues. Step forward Argo, for instance. The film has received good reviews simply for its subject matter, but those reviews come from critics who care only about its subject matter. In which case, they should watch a documentary.

As a piece of cinema, this is a boring mess about financial institutions. You’ll want to rush to see it. Not.

Together with MARGIN CALL, this film deals with the 2008 financial crisis and is a classic of now.

It's funny, jaw-dropping, intelligent, original and I loved it. The film was not a minute too long.

Great acting from many Brits in here too, from Christian Bale and others.

Absorbing and Interesting - The Big Short review by DB

If you are interested in 'issues' and about learning how things have happened, this film is for you. Yes, it can be confusing and you do need to concentrate however it is uterly absorbing, entertaining but most importantly it shows exactly what caused the economic crisis and who was to blame. The performances are excellent and you really root for the main characters despite them betting on failure. A wonderful film, that most people will enjoy.

Really enjoyed this film - although had to view twice and concentrate to get the gist of the story ! Interested in the ins and outs of trading especially as true story. Found the snips where some of the terms was explained and this was different and worked well in this film. Some good acting and interesting outcomes for alternative characters along the way! Couldn't see the point of the occasional shot of semi naked woman in bath - didn't bring anything to the party for me - prettysexist - like Wolf of Wall Street but otherwise would recommend!

compelling and informative - The Big Short review by OP

I learnt a lot from watching this film, which I found compelling viewing. it wasn't always easy to follow (but you wouldn't expect fraud on that magnitude to be simplistic) and the acting was excellent

… as you would expect from a film about the destruction of western civilisation. Awesome acting, loved every minute.