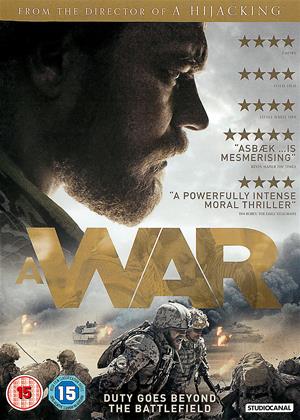 If you like your cinema to show some style, give this a body swerve. Grainy, hand-held, fly-on-the-wall, documentary-style filming with no soundtrack music makes this portentously-titled film hard to like. Some enthusiastic reviewers have mistaken its lack of style for intensity. Don’t trust them.

The action switches between soldiering in Afghanistan and a soapy family back home in Sweden before spending the second half of the film in Sweden after the soldiers come home. It’s all very heartfelt and well-intentioned and tackles serious issues about the morality of modern warfare, but the in-your-face approach has been done many times before and alienates rather than involves the viewer, making it difficult to empathise with the characters and their situation.

Morality-of-war films have been around a long time and the excellent Good Kill shows how it can still be done. Judged purely as a movie, A War is dour anti-cinema. The trailer tells the whole story, but watch it first to avoid disappointment.

This is a slightly unusual film. It is a Scandinavian war movie about Afghanistan. This is not that common.

There is some fighting in it, but not so much. Quickly, the movie goes into a different mode, asking uncomfortable questions: what is a just war? What is a good decision in such extreme situations? Who is guilty and who isn't? What would you have done? There are no easy answers. There are bad ones, and very bad ones.

The film is a bit slow and a bit ponderous, once removed from the battlefield, but the tension is ever-present and feels real.

This is not a Hollywood spectacular. It feels more like a documentary. For this very reason, I would certainly recommend it. It will change your perception of war and army life, unless you are familiar with both.