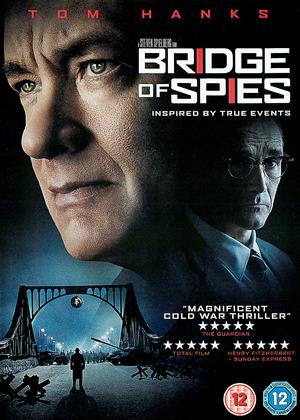 Reviews (7) of Bridge of Spies

I enjoyed this film.

I thought it was acted well and I believed in the characters.

Because It based on fact & real experiences I found it really interesting.

The good news is that this is one of Spielberg’s adult films. The bad news is that he’s overcompensated with laboured direction. Mark Rylance’s performance as the suspected Russian spy in 1950s America is likewise woefully understated. Tom Hanks’ usual lively performance as Rylance’s attorney consequently provides a welcome breath of fresh air.

The plot holds few surprises even if you don’t know the real-life story on which it is based. It does become more interesting when the ‘action’ moves to Berlin… after a whole hour, but that’s too late to pick up much dramatic momentum. Adding to the underwhelming package is Thomas Newman’s irritating score, which visits every cliché from military trumpets to plinky-plonk piano. You can imagine the kind of scenes to which such snippets add unneeded emphasis.

Described as a dramatic thriller, the film is rarely dramatic and never thrilling. The best Cold War thriller remains Martin Ritt’s The Spy Who Came In From The Cold. If you haven’t seen that, do so.

Tom gets heavy. Literally. - Bridge of Spies review by NC

Tom starting to look like Plasticine replica a bit now. Going very putty in the facial department. Still does the job though. Rylance is creepy as the spy..not sure if he is acting, or is like that anyway?

Very slow by todays standards but see Spy Who Came in from the Cold with Richard Burton. That has the drear, grey feel, of Berlin when the wall went up.........

Liked it - Bridge of Spies review by JJ

Enjoyable movie would recommend as good interesting storyline & true I think? worth a watch & Tom Hanks was amazing.

So different, therefore, so refreshing. - Bridge of Spies review by DJ

What I found so enjoyable about this films was the lack of that single note and a drum, against which most narrators, actors and actresses have to vie.  There was a music score, but, as in most of Stephen Spielberg's films, he understands the power of silence and frequently uses it to instal gravitas in the mind.  The 'clever' critics often look for something that isn't there, then bemoan the fact.

This film possesses a beautifully acted role by Tom Hanks, who takes the lead.  It has a steady pace and even sports the mediocrity of life, in that I felt there was no exaggeration, no stupid ideas, no unbelievable moments, it was what is was, a docudrama of just one instance from the life of a man who went on to save thousands of lives.

In reality, life is often quite hum-drum.  Only fiction produces the impossible, incredible, unbelievable stunts of survival, where the hero is clairvoyant  and beyond reproach.  For those of us who lived through the 'Cold War', this film will have more meaning ... a very enjoyable film for the mature amongst us.

A smart, intellectual espionage film based on real events and benefiting from the trademark realism, in this case for the late 1950s, that director Steven Spielberg does so well and very much aided by the sharp script courtesy of the Coen Brothers. Tom Hanks utilises his All American family man persona to its usual full effect as the humble attorney Jim Donovan who is assigned to defend Rudolf Abel (Mark Rylance, in a stunning performance), a Soviet spy arrested by the FBI. Donovan is dedicated and does his job properly despite being publicly threatened and vilified in the tabloids and he manages to avoid his client being sentenced to death. A few years later and an American pilot is captured by the Soviets and Donovan is recruited by the CIA to negotiate a trade, the pilot for Abel. Reluctantly he agrees and heads off to Berlin but he decides to carry out the negotiations his way and rejects his CIA controller's orders. Spielberg recreates here the infamous U2 spy plane incident, a key moment in the Cold War. This is a tense drama that attempts to follow the world of spying in the Cold War accurately so consequently this isn't a film with gadgets and guns. It is rather a thought provoking story and effectively a historical one that brings into the public eye an unsung American hero. Hanks gives his usual well crafted performance but it's Rylance that makes the film so very watchable. This is one of Spielberg's more subtle and restrained films and its well worth a revisit if you've only seen it once and definitely one to see if you've not done so.

Excellent acting by all concerned and good directing also. Captures the drama of the times very well. Is dramatic, suspenseful and witty all at the same time, even though there is very little 'action'.