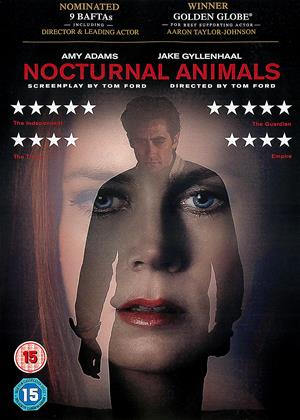 Will's Rented
98 films by will

You know those pieces of conceptual art that have nothing to show beyond a concept? This is the cinematic equivalent, except that ‘cinematic’ it isn’t. Amy Adams lies around staring into space while the thriller she’s reading plays out for us in flashback. There’s supposed to be synergy between the two timelines, but the present timeline is too inane and boring to care about. There’s even a third unnecessary backstory shown in flashback.

The thriller timeline is the only one with any interest so you’ll probably give up on the others and try to catch that by fast forwarding to the interleaved clips of it. That said, it’s an unpleasant rape/murder story that salivates in the victims’ terror. Writer/director Tom Ford seems to like degradation. The film even opens with some grotesque obese nude dancing that may well have you hit fast forward immediately.

Rather than a thriller, this is more a slow-paced, forced melodrama, with stilted acting and dialogue. The only real success is the detective who investigates the murders. As played by Michael Shannon he injects a much-needed dose of reality.

Nocturnal Affairs reminds you of those bum-numbing painterly pieces Peter Greenway used to make in the 70s. It’s like a student exercise. On the DVD extras Ford explains the concept and, as with most conceptual modern art, that’s more interesting than the piece itself.

I seen this film in the cinema yesterday. I loved it, period.

Amy Adams plays Susan, a successful art gallery owner surrounded by the decadence of her materialistic lifestyle. Ironicallly, this love of the materialistic which she once sought to a tragic extent, is now something that she views as not so important. Unhappy in her current marriage, her husband's business interests in a crisis, which he really cares about and Susan is indifferent, set the scene for her to receive a package out of the blue. The package is a novel by her first husband, namely Jake Gyllenhall, whom she hasn't seen for 19 years.

Susan begins reading the novel, which we see in her minds eye in movie form. This fictional film runs alongside flashbacks of her first marriage, and Susan's current life.

This film is deep and meaningful and had me thinking for ages after leaving the cinema, ah that means that, ah that's what Gyllenhall novel is referring too there and there etc. Adams and Gyllenhall are superb in this movie, also Michael Shannon, very memorable as the cop in the fictional story.

I know when I watch it again I will see and understand more on the second viewing. A real touch of class.

This had me watching to the end, wondering what was going to happen. And nothing happens. It's all a con. Style over substance. The emperor is not wearing any clothes!

Nocturnal Animals is a very harrowing film and I think a very good film too. I found it to be meaningful and a thoughtfully written work. It's adapted from a 1993 novel 'Tony and Susan' by Austin Wright. There have been some strident attacks on the movie including accusations of misogyny. Victoria Coren Mitchell was particularly scathing in one review. It is the sort of movie that film theorists could argue about at length but it didn't strike me as misogynistic and I've not read anything to significantly change my perspective.

There are some stylish set-pieces. Director Tom Ford does not use sheen and gloss sparingly but he isn't afraid to show you the shit and flies easier films might photo-shop out of life. The acting is top-rate from all of the cast here. I wasn't so much gripped throughout as alarmed and terrified. The ending is perhaps slightly muted but I liked the way it rounded off the tale in a wholly contrasting tone to what had come before. I think it's a deep, concerned and thoughtful movie which asks difficult questions of society and the viewer.

It is stylish but for me a little disjointed. I found it hard to follow the back and forth and which bit was real or imagined. Having said that we watched it to the end and it filled a quiet evening.

Nice present but the wrapping is really worth it. - Nocturnal Animals review by RP

No doubt that the thriller was a good idea. But as we have seen similar before they made it into an arty, meaningful, lost dream, wistful, looking back on what could have been, multi layered type of film. It works well and has a great cast that add substance and depth to what could have been just another thriller. Yes It could be argued that it is a case of style over substance but there is nothing wrong in that. Just in case you didn't pick up on the little pointers between the past, the present and the fictional book, the extras add the hammer to explain it. Well worth a watch I thought.

Great actings, fab scenes, love the clothes, designer homes and sets. But story like a single man was a bit weak and a very disappointing ending.

Surprised this didnt win oscars over LA LA Land. Excellent casting especially Amy Adams and Aaron Taylor. Nerve wracking film throughout until the end . I agree with the other reviewers who appeared disappointed with the ending. Same here - bit of an anticlimax after such a thoroughly good movie which is why i reluctantly gave it only 4 stars.

Even so highly recommended as one of the best movies in last couple of years.

I can't fault the actors at all, they gave good performances, but overall I found this film to be style over substance.

Amy Adams plays a very rich gallery owner who wanders around her opulent home "tormented" by memories of her failed first marriage, which are triggered when her ex-husband (Jake Gyllenhaal) sends her a manuscript out of the blue. The novel is shown as Susan reads it, a nasty revenge piece.

That's it basically, with lots of misogynistic imagery and acts on screen. The women are vapid and/or need rescuing, either from their gilded cage or their attackers.

Tremendous acting here from Jake Gyllenhall, Michael Shannon and Aaron Taylor-Johnson (you'd never guess he was born in the Home Counties). Their scenes warrant their own movie.

As it happens though, their scenes are from the pages of a novel that Amy Adams is languidly thumbing through and we are subjected to numerous scenes of her supposedly being tortured by her raw memories about its author (her first husband, also played by Jake Gyllenhall). She struggles to sleep, she stares off into the distance, she takes a bath, she rubs her temples, she walks in a daze around her stunning LA home...and herein lies the crux of the matter: it is hard to feel sympathy for someone lounging about in such fashionable clothes, dripping in jewels and being 'trapped' in a gilded cage.

The novel fizzles out though and the film's ending, although mildly surprising, fails to deliver a sucker punch. Worth a watch despite its failings.

Based on based on Austin Wright's 1993 novel, Tom Ford’s Nocturnal Animals is a story that loves to get lost in its dialogue and decadence, for better and worse. At many moments the film will find itself being so caught up in its lingering scenes of tension, revenge, and bitterness. And for most of the ride, I found myself digging on a story that at times seems too spotty as it shifts between characters and worlds, fictional and somewhat real.

The reality we’re meant to believe is occupied by Susan Morrow (Amy Adams), a Los Angeles art gallery owner. She’s divorced from her ex-husband writer Edward (Jake Gyllenhaal) and now married to the cold and uninterested Hutton (Armie Hammer). Her life is dreary and uncomfortably quiet in the sterile world of her plush estate and open gallery. But then she receives a manuscript from Edward who wants her to take a look at it.

The world of the novel involves Gyllenhaal in a fictional story a Texas crime. Gyllenhaal plays Tony, a meek husband to his wife Laura (Isla Fisher) and father to his daughter India (Ellie Bamber). They drive down the wrong Texas road at night and find themselves assaulted by a gang of no-good troublemakers led by the mustached Ray (Aaron Taylor-Johnson). A long and uncomfortable tailgating leads to a terrifying roadside chat where we know nothing good is going to come from exchanging insurance information. A kidnapping occurs and Tony finds himself escaping capture. He works with local Detective Bobby (Michael Shannon), giving Tony the chance to get the real justice of revenge he may very well desire.

Ford’s back and forth between the two worlds, split up when Susan can only read so much, creates an interesting contrast in the merging of these worlds, though not explicit. While Susan’s world is one of cold comfort where the biggest bickering is of infidelity and integrity, Tony’s tale is a dark, grimy, and violent one. There’s an almost fantastical nature to his story of detectives going crooked and gang members of rape most gruesome and psychology most unhinged. Taken on its own, Tony’s struggle is a solid piece of crime and revenge storytelling. But paralleling it with the writer’s ex-wife reading creates a remarkable juxtaposition. I enjoyed how anytime the violence and rape became too much to handle, Susan would take a break as much as we would and a more believable story of an elite’s first-world problems comes as a breath of fresh air. Through her perspective, the Tony world lingers and we want to return if only to find out what happens next and forget about the other world.

It’d be too easy to write off the picture as an uneven mixture of the avant-garde and a Southern thriller. The two work together greatly to weave an unease of the dreary existence and the fantastical world where things get worse but more intense. Adams and Gyllenhaal are at their best in performances they can really chew on with plenty of room to mount the drama and the bleakness of their situations. Ford’s direction lingers on the juiciest of scenes, letting all the violence and uncomfortable exchanges play out with the most engaging of scenes. There’s never a dull moment in the picture, even when it feels as though Adams’ world is filled with dullness and Gyllenhaal’s is one of cliches. The pairing of both makes us question each one a little more in a fantastic little rabbit hole to tumble down.