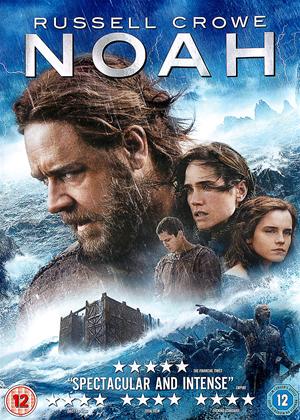 I love most films. This has glimpses of good acting but a ridiculous plot- which isn't based on the biblical version or any other version you or anyone else with know about! I understand it's fiction but seriously- the transformers review is spot on. Don't waste your evening!

Anybody expecting this film to be a biblical epic re-telling the story from Genesis is going to be disappointed. It's not that version - this one is from the apocryphal Book of Enoch, partly based on the Book of Watchers. The 'stone giants' are meant to represent the Watchers, angels sent to watch over man, a number of whom had offspring (Nephilim) with human women. The flood was intended to rid the earth of Nephilim. The angelic form of the Watchers is seen released from their earthbound stone form when they die during the battle with Tubal Cain's men. And Tubal Cain (played by Ray Winstone) is barely mentioned in Genesis. All clear as mud now?

That's as much as I want to say about the background to the film. I remember with a certain fondness the biblical epics of the 1950s and 1960s and I looked forward to Darren Aronofsky's film, thinking that with his pedigree he would be able to deliver something new. But no...

This is awful, unwatchable, turgid drivel - yet I managed to stay the course to the end, hoping against hope that it would improve. All I can think is that Russell Crowe must have wanted the money very badly.

I'll give it an over-generous 1/5 stars. This is terrible stuff.

Faulty dvd which Spoilt the evening. A disappointing film considering the cast. I would not recommend.

A load of Old Testament hokum that drifts badly in the watery second half. No doubt creationists will love it - though there is a nod to evolutionary fact in the speeded up sequences. There is also a clear reference to a tsunami - which is how the myth or Noah and the ark was cobbled together (though actually scripture does not even mention 2 of each animal...)

The premise is silly; the acting hammy; the conclusion wet. Some people'll love it!

But I certainly cannot recall fallen angel rock men from my school days, nor any battles before the ark set sail, nor any cockney descendants of Cain acting as the adversary to increase jeopardy and dramatic tension!

Oh well, it passes the time. And I doubt Sir Anthony Hopkins has seen as much rain since he lived in Port Talbot (where it's wetter sometimes).

I saw the trailer for this movie and had really looked forward to it, thinking it may be an action biopic. Boreathon. Best bits in the very short trailer, slow start and no speed up towards the end, just plain slow.

A film that if i bought it in the shop I'd of returned it. Wish I had rented something else!!!

let down - Noah review by gazmb

I was really looking forward to this film but was left dissapointed with it. The story was very poor and what was with the stone like monsters protecting the ark. I was expecting it to be based on the biblical writings.

Thought this film would be very entertaining considering the title and the associated historical biblical story - what a disappointment. The film was dark, slow, uninteresting and boring ............ and where did the stone monsters come from ? Glad the film was rented and not bought. Badly acted with a awful story line. If you are looking for a boring film watch this one, better suggestion though, don`t, give it a wide berth

This film lost its way from the start. A pointless and confused storyline, with bad acting and corny special effects.

I will make a point of reading the reviews next time, and not trust the studio hype.

I do not know what Russel Crowe was doing taking part in this film, it was dreadful. It did not follow the story in the bible, I just do not know where they got their facts from, just dreamed them up I think. Special effects were not bad, but on the whole very disappointing.

Russell Crowe as a scowling Noah, Anthony Hopkins living in a cave on top of a mountain and some stone creature refugees from the Lord of Rings films made for a not very enjoyable film. Left me a bit baffled!

I understand the idea behind bringing a new vision to a biblical text, a fantastical yet relatable spin on the tale of Noah and his grueling task of saving humanity from itself. Director Darren Aronofsky has attempted to bring an added sense of struggle to the already famous story yet all that really comes across is the poor plotting and some even weaker performances from the films supposedly stellar cast.

Noah follows (surprise surprise) Noah (Russell Crowe) as he is sent a message from God showing him that he must embark on a quest to save the innocent from an impending disaster. With the help of his family he must build an ark capable of holding two of each animal before the hoards of men arrive and attempt to gain passage to his vessel. Along the way miracles and mistakes occur that forever change the story we all thought we knew.

While Crowe gives himself completely to the films bogus, ever so slightly offensive take on the story I cannot say the same for the rest of the cast with stellar performers like Anthony Hopkins and Jennifer Connolly reading their lines like the phone book. Regardless of this the film houses two terrific performances, oddly enough by Perks of Being A Wallflower leads Logan Lerman and Emma Watson, who is excelling in her post Harry Potter career.

Aronofsky, known for far out and oftentimes distressing films seems to have lost his edge with Noah as it fails to grip in the same ways as films like Black Swan and Requiem for a Dream. The visuals are wonderfully vivid and beautiful with a great use of the wide open spaces the film lives in but the picture is clunky and poorly edited making the film confusing in more than a few aspects.

While the film has a director with an eye for detail it fails to grasp the beauty of the story instead looking to make its own mark on the tale, a mark that feels more like a stain.